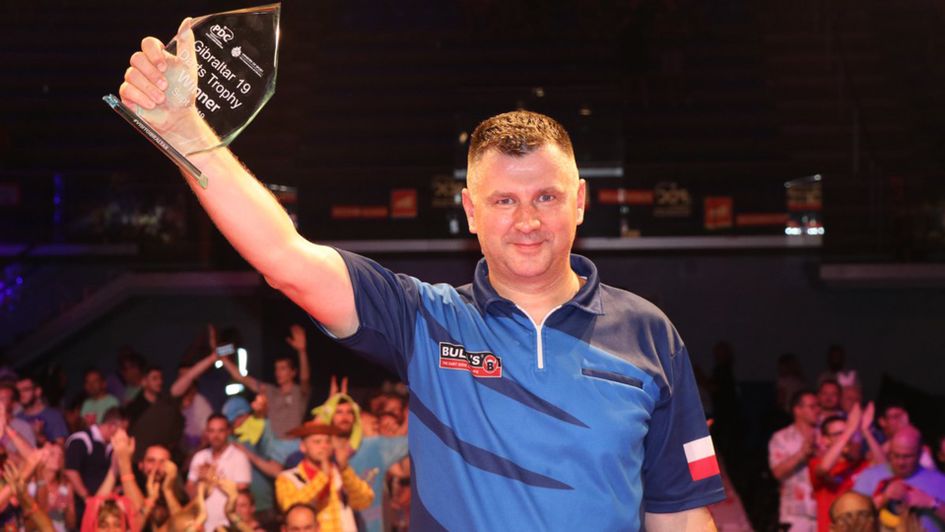 Krzysztof Ratajski sealed his first EuroTour victory, and became the first Polish winner on the tour, with an 8-2 demolition of Dave Chisnall in the final of the prestigious Gibraltar Darts Trophy on Sunday night.

“The Polish Eagle” soared to the title with an impressive win against “Chizzy” who can also be proud of his efforts in his first tournament since joining forces with Harrows Darts.

Former World Master Ratajski leveled the match at 2-2 with a 124 checkout and then never looked back, reeling off six legs,  without reply, finishing the match with a 102.85 average to pick up the trophy and the £25,000 first prize.

He was understandably delighted with his efforts.

“I’ve won floor tournaments but this is the first one I’ve won in front of a crowd.

“This is a great night for Polish darts and I’m just so happy to lift this title.”

Ratajski started his challenge at the second round stage on Saturday afternoon, with a 6-3 win against Steve Beaton, and repeated the scoreline against Joe Cullen to reach the last eight. A third straight 6-3 win accounted for Ian White, and he serenely moved into the final with a dominant 7-3 win against Daryl Gurney.

For Chisnall, he enjoyed something of a renaissance over the weekend, topped off by a nine dart finish in his quarter final meeting with James Wade.

The St Helens man had previously accounted for Jeffrey de Zwaan and Jermaine Wattimena, before defeating Wade 6-4 to reach the semi finals.

There, he would meet UK Open and Las Vegas World Series winner, Nathan Aspinall. The Stockport man had already beaten Michael van Gerwen 6-3 earlier on in the day, and then defeated Peter Wright by the same score to claim his place in the last four.

Chisnall advanced to his second EuroTour final of the season with a deciding leg 7-6 win, but found Ratajski too strong for him in the final.

Elsewhere, the European Championship field was confirmed, when Kim Huybrechts was beaten 6-2 by James Wade in round three.

Daryl Gurney avenged his recent defeat to Glen Durrant on the tour with a 6-1 win in the third round. The Irishman would go on to beat Gerwyn Price 6-3 in the quarters, before being eliminated by eventual champion, Ratajski.