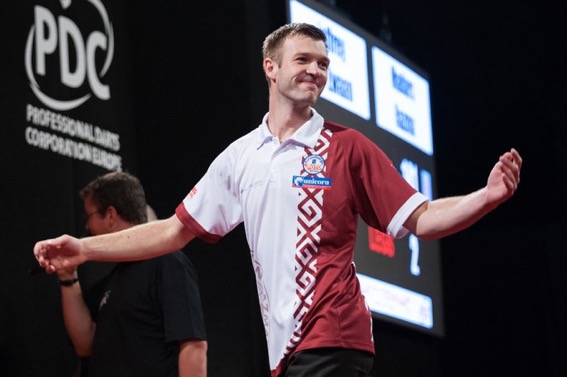 After already enjoying a magnificent start to 2019, Latvia’s Madars Razma clinched the opening Nordic and Baltic Pro Tour event at Sweden’s Apple Hotel in Gothenburg with a 6-0 win over Ulf Cedar in the final.

Razma was forced to hand his tour card over at the backend of last year, after failing to get into the world’s top 64, but instantly won it back after winning through European Qualifying School courtesy of the order of merit.

Now, ‘Razzmatazz’ stands in good stead of a William Hill World Darts Championship debut after winning the opening event of the season, and therefore sitting top of the respective ranking system.

Andreas Toft Jorgensen was the first victim of Razma, before a 100.2 average and 6-3 win over Andreas Harrysson booked the Latvian’s place in the quarter-finals. He then survived a scare in the last eight, as Edwin Torbjornsson squandered a dart for the match, with Razma eventually closing out a narrow 5-4 victory to progress.

Razma trailed 3-0 in the semi-final and was thoroughly up against the odds in a tough tie. Sweden’s Johan Engstrom pinned a 124 checkout to move three ahead, after already averaging over 107 in the opening leg.

But, last year’s Players Championship 19 finalist, Razma, fought back as he reeled off five of the next six legs, before pinning a scintillating 12-darter and 145 outshot in the decider to move into the final.

Ulf Cedar would be the man standing in front of Latvian number one, Razma, after claiming scalps over the likes of Jonas Fredriksson, Oskar Lukasiak and Daniel Larsson en route to the final in Gothenburg.

Razma raced to victory in the final as he whitewashed Finland’s Cedar – a former European Tour participant – to claim his third Nordic and Baltic Pro Tour title just months after clinching the double in Iceland.

Icelandic duo of Vitor Charrua and Aegir Bjornsson exited at the last 64 stage in proceedings, with Dennis Nilsson also enduring defeat at that stage.

PDC Nordic and Baltic action will resume on Sunday afternoon from Gothenburg, Sweden with the second of this year’s Pro Tour events taking place. Can Madars Razma complete the double for the second time in four months?

Cullen upsets Cross as Wright edges past Lewis at Masters