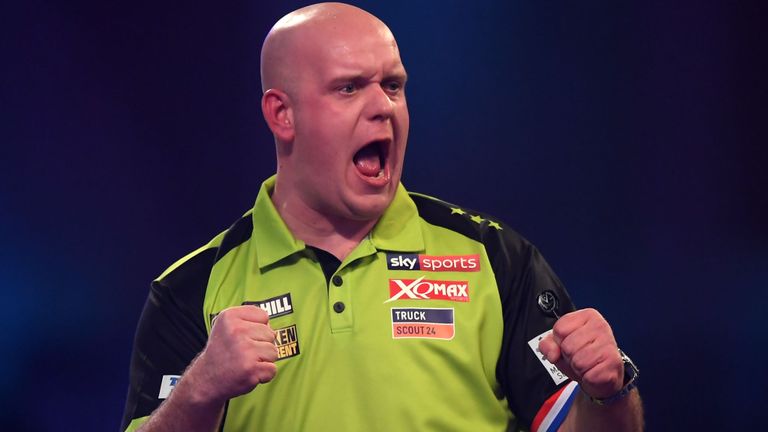 Michael Van Gerwen put his World Championship final defeat behind him as he beat Peter Wright 7-5 in Aberdeen on the opening night of the Premier League.

Wright, who beat MVG on New Years Day to win the World Championship, took an early lead before being pipped to the post by the World Number 1.

Elsewhere, Glen Durrant shone on debut with a victory over Michael Smith as well as a win for Nathan Aspinall who beat challenger John Henderson on his bow in the main competition.

Gary Anderson also found themselves in the winners enclosure, whilst Rob Cross and Gerwyn Price drew 6-6.

But, it was the battle of the leagues top two which stole the show as Wright and Van Gerwen served up a classic.

Snakebite hit the front early on where he broke in the first leg before hitting a 120 checkout to race into a 2-0 lead.

Wright missed darts to extend that lead to 3-0 before MVG hit a 106 checkout to half the deficit.

And more misses on the double ring continued to plague the World Champion as Van Gerwen hit back and then took the lead 3-2.

The game then follow a pattern of legs being shared going into the final two legs with the score 5-5.

From that point onwards the Dutchman rallied to win two legs in succession and in the process secure that avenging win over Wright.

Elsewhere, it was a night for the debutants in Aberdeen inside the new P&J Live arena as Glen Durrant and Nathan Aspinall announced their arrival on the Premier League stage with victories.

Durrant opened up the evening against recent Masters finalist Michael Smith where he seemed to control the contest as he hit seven from nine on his doubles with a 95 average to win 7-3.

Aspinall took on challenger John Henderson, and despite the vocal support for the Highlander Aspinall held his nerve and hit a 170 checkout in the process to also come out a 7-3 victor with a sub 90 average.

Gary Anderson won a see-saw battle with Daryl Gurnery where the Flying Scotsman had to break the two time major champions throw three times to secure the win.

The Flying Scotsman missed out on the Premier League due to injury problems but made up for lost time shining in large glimpses of the game and showing his comeback abilities to recover from a 5-4 deficit to win 7-5, averaging 95 in the process.