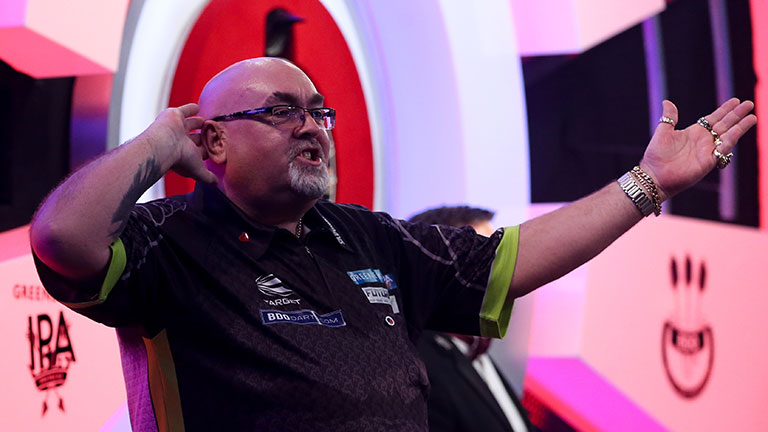 Tony O’Shea collected two wins and a draw on Night 10 of the second edition of the Remote Darts League to move up to 6th in the overall table.

‘The Silverback’ beat David Cameron and Tina Osborne comfortably as well as drawing with Joe Chaney, while Cameron and Chaney both picked up significant hauls to rise up to 5th and 3rd respectively.

The league is starting to take shape now with Paul Hogan remaining three points clear at the summit, but all three men that played on Wednesday night can consider themselves in with a great chance of a semi-final berth with six matches to play.

The 10th session of action got underway with a clash between Tennessee’s Chaney and three-time Lakeside runner-up O’Shea. The American led 5-0 but Stockport’s O’Shea incredibly managed to pull it back, surviving handfuls of match darts to seal a 5-5 draw.

Canadian Cameron got off to a good start, seeing off Osborne 6-1 with 40% on the doubles, before a clutch 116 checkout in the tenth leg rescued a point for ‘Excalibur’ against Chaney.

New Zealand’s Osborne avoided the whitewash once more against O’Shea, but could only muster one leg as ‘The Silverback’ ran out a 6-1 winner.

The scoreline in the night’s penultimate contest meant Osborne won more legs in this group than she had in her previous two combined.

She couldn’t prevent a scrappy 6-4 defeat to Chaney, but credit to her for hitting four out of seven double attempts and giving ‘The Chainsaw’ a scare.

O’Shea hasn’t started Remote Darts League 2 in the form that saw him reach the semi-finals of the first event, but he completed a pleasing night with a 6-2 victory over Cameron. The game saw the highest average of the night, a 90.5.

The tournament takes a break on Thursday night before returning on Friday evening with a blockbuster quartet of players: Jim Williams, Richard Veenstra, Thibault Tricole and Laura Turner.