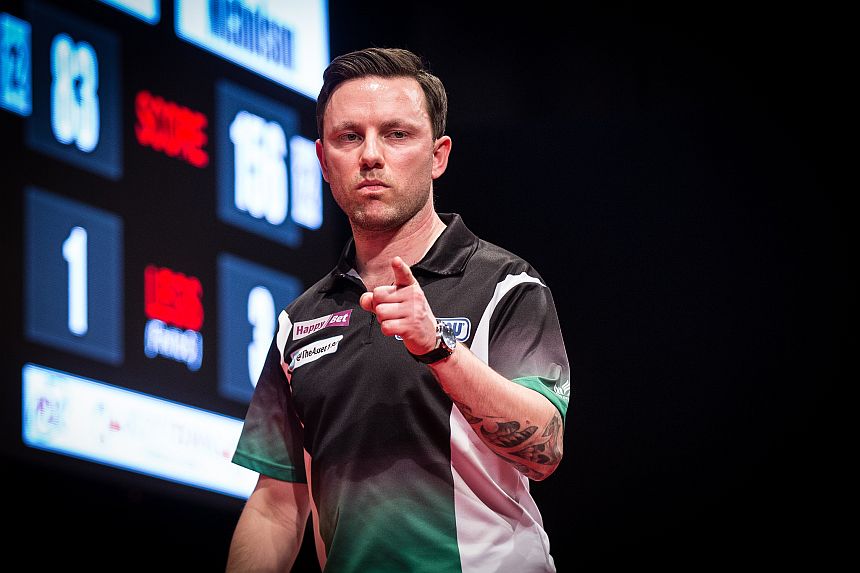 The Modus Icons of Darts Live League consists of remotely contested daily darts coverage, coming directly from players’ homes in order to fill the void created by the coronavirus outbreak on both the professional and exhibition circuits.

Both Wessel Nijman and Evans had previously claimed a pair of titles apiece prior to Friday’s action getting underway, with Nicholson becoming the third player to reign victorious since the new initiative launched.

The former Players Championship Finals winner commenced his campaign with a commanding 5-2 win over Raymond van Barneveld – who was fresh from his deciding leg victory over arch-rival Phil Taylor on Thursday.

After punishing 10 squandered doubles from van Barneveld, Nicholson missed 15 darts of his own on the outer ring despite narrowly edging past Mark Webster and hitting a magnificent 160 outshot.

The Englishman then overcame Andy Jenkins, before pulling off his most significant scalp of the day in narrowly defeating Evans in a last leg decider, and therefore bringing to an end the Manchester-based ace’s seven match winning streak.

Nicholson pinned five maximums against Evans and, despite missing 17 of his 22 attempts on the outer ring, claimed the Group Five title with two matches still to be played.

The former PDC Challenge Tour event winner registered his most prolific display of the tournament against Webster to round off the afternoon, averaging 98.37 and hitting five of his nine attempts on the doubles.

The Modus Icons of Darts Live League returns on Saturday morning from 11am, with 19-year-old Nijman returning in replace of Evans.

Van Barneveld denies Taylor in soft-tip showdown as £15,000 is raised for health workers