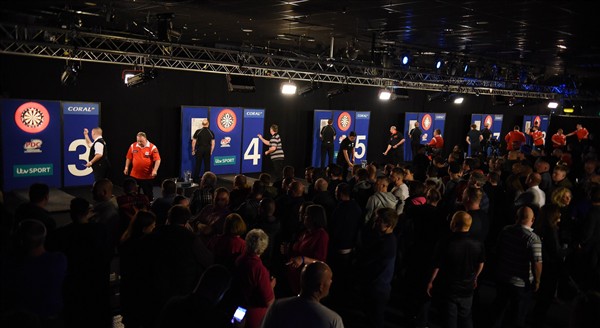 Riley’s UK Open Qualifiers latest: Newton and Taylor among those heading to Minehead

There is now just over three weeks to go until the Ladbrokes UK Open gets underway at Butlins Resort in Minehead.

The tournament is labelled the ‘FA Cup of Darts’, with that mainly being down to the amateurs meeting the professionals similar to in football.

Riley’s clubs across England and Scotland have hosted have and will host events prior to the UK Open with 16 amateur throwers earning the chance to play on the Butlins stage.

Among those heading to Minehead so far is former finalist Wes Newton who came through Chorlton’s qualifier. Newton will return to the seaside town after three years away from the event.

Shaun Fox, Kevin Thoburn, Lloyd Browning and Lee Harris will all make their debuts in Minehead after coming through their respective qualifiers.

Former tour card holders Mark Barilli and Scott Taylor are also amongst those heading to Minehead.

Taylor – a Pro Tour finalist in 2018 – came through the Riley’s Chester Qualifier after a hard-fought victory over Mark Jodrill in the final.

Greenock’s Barilli was victorious in his hometown on Saturday evening with a deciding leg win over Craig Smith. The 45-year-old will make his sixth UK Open appearance in March, and told Darts Planet TV following his success at Riley’s Greenock: “He’s sat there on 96 and I’m thinking, he’s taking this, he’s taking this. He didn’t, thankfully, and that was it really. I don’t really remember the last dart.”

Further qualifiers will go ahead in South Benfleet, Wolverhampton, London, Sheffield, Liverpool, Harlow and Norwich. Will you be joining ITV’s Ned Boulting in attending? Well, you can, for just £8, and maybe you’ll be throwing against the world’s best in Minehead next month.