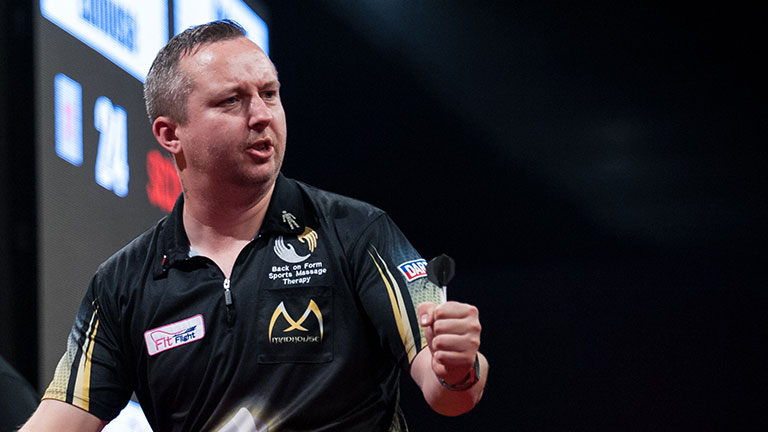 Ritchie Edhouse beat John Brown 5-0 with a 110.5 average on the way to winning four of his five games to claim the Day Two title in Week Two of the Modus Icons of Darts Live League Phase Four.

He also averaged 105 against David Evans, with a 5-2 defeat to Andy Jenkins the only blemish on an otherwise perfect day for ‘Madhouse’.

The final day of the online competition before a week’s break began with a 5-3 victory for Stephen Burton against Brown, before Burton fell to a defeat to Jenkins by the same scoreline.

Brown, son of PDC professional and JDC chairman Steve, showed what he’s capable of with a 99 average in a 5-1 win over Jenkins before Edhouse got his campaign underway with a 5-3 success against Burton.

Mark Webster took out 103 in a decider against Brown to start his day in style, while Evans averaged 100 and hit 5 of his 8 double attempts in a 5-3 win over Jenkins.

As the day progressed, all the players were beating each other with Webster moving onto four points after two matches, seeing off Burton 5-3.

Elsewhere, Evans produced two four-visit legs in a comfortable 5-2 win over Brown, while Jenkins beat Edhouse by the same margin.

‘Stretch’ was looking good for another dominant title win as he thrashed Burton 5-1 to go within two of a clean sweep.

Edhouse responded fantastically with that superb performance against Brown, before Jenkins beat Webster 5-2 and Evans suffered his first defeat of the day, 5-1 to an inspired Edhouse.

PDC World Championship qualifier Edhouse saw off Webster 5-3 to make it four wins for the day and end the Welshman’s title hopes, and the round robin was completed with an excellent 5-1 victory for ‘The Spider’ over Evans to ensure that the Lancashire thrower finished fourth after a promising start.

The Modus Icons of Darts Live League now takes a short break to allow for the PDC Summer Series, but it is set to return next Monday, 13 July.