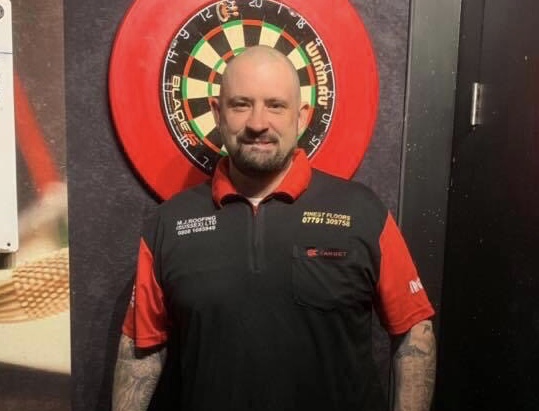 Rob Collins: ‘I’m not there to make the numbers up’

It’s safe to say it’s been a busy period in the life of Robert Collins – a Bognor-based thrower aiming for stardom. After narrowly missing out at the dreaded Qualifying School, and making his debut on the Challenge Tour, Collins traveled up and down the country in search of a spot at the Ladbrokes UK Open.

When recollecting the ‘FA Cup of Darts’, Barry Lynn is a name that will spring to mind, for sure. He made the UK Open quarter-finals back in 2016, denying two-time World Champion, Gary Anderson, along the way. And, Lynn was who Collins denied in the decider at Riley’s Victoria to clinch his place at the Ladbrokes UK Open in Minehead.

“I got into darts when I was younger through my mum playing for a local team, where we used to live in London and it went from there, really,” said Collins.

The Bognor-based thrower headed into January’s Qualifying School as a highly-fancied player to come out victorious. He came close. But, he didn’t quite do enough to secure his two-year tour card, meaning he’d be participating on the Challenge Tour for the duration of 2019.

The Challenge Tour is the second tier of the professional darts – below the Pro Tour – which enables those who missed out at Q-School to play their trade, away from the PDC’s elite, with the top two on the leaderboard earning a two-year tour card following the five weekend’s of gruelling, intense action. Collins added: “The Challenge Tours are now so difficult to maintain a high standard of darts as it’s such a long and gruelling day.”

Collins will now make his debut at the Ladbrokes UK Open, after coming through the Riley’s Victoria Qualifier – where he denied Barry Lynn in the final at around 10.30pm, following around 11 hours of dramatic darting exertion.

“I cannot wait,” said Collins. “I feel like a kid waiting for Christmas. I just want to prove to myself, and my fans, that I can and will mix it with the big boys. “The thought of travelling up to Liverpool the following weekend absolutely would of demoralised me. I’m so relieved and happy I obtained my spot at the UK Open when I did.”

There has been a lot of speculation that the Riley’s Amateur UK Open Qualifiers should be discarded, after tournaments have had over 200 players participating in qualifiers held on eight boards.

But, Collins believes that there is still life in the qualifiers and that they are essential in the format of the Ladbrokes UK Open. “I don’t think they’ve run their course,” said the 39-year-old. “It gives people a chance to dream and fulfil there goal to get a spot, if your not luckily enough to already have your tour card.”

Collins now heads to Minehead knowing he is in good form after coming through a record 200-man field in London, but, he’ll face a tough opponent in Rowby-John Rodriguez in the first round, with Andy Boulton awaiting the winner.

“I’m there to win it, I’m not there to make the numbers up,” added a confident Collins. “I honestly believe I can lift that trophy along with the cheque, and with Jason from Modus backing me, I’m hoping to succeed in darts.”

Luke Humphries: ‘I’ve got to work on my floor form because I want more nights like this’