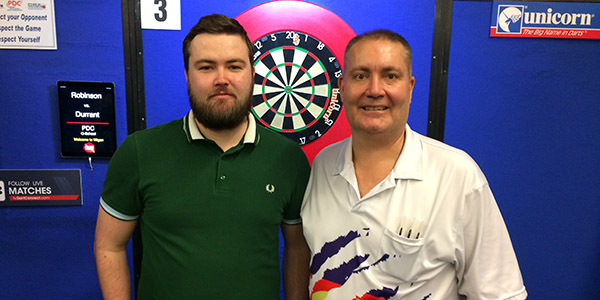 The pair joined Thursday’s winners Jamie Hughes and Harry Ward, and Friday’s graduates Mark McGeeney and Scott Baker in gaining a two-year PDC tour card, enabling them to compete amongst the darting elite across Europe.

Clark – who had competed at the World Matchplay, World Championship and the UK Open prior to losing his tour card at the backend of 2017 – averaged 104.7 in seeing off Ireland’s Gavin Carlin to regain his coveted PDC tour card.

‘Superman’ got off to a slow start in Wigan as he was forced to battle back from 3-0 down to eventually edge out Justin Smith in a deciding leg.

Wins over Simon Tate and Justin Broton, followed by a narrow 5-4 win over Royden Lam, in which he survived match darts at the hands of the Hong Kong arrowsmith, saw Clark secure his place in the last 32.

A sensational showing followed for 50-year-old Clark as he whitewashed Darren Beveridge, averaging 103 in the process, before victories over Keith Rooney and James Kempster moved the Dartford thrower on the brink of a PDC tour card in Wigan.

Clark raced into a hefty 4-0 lead in the final against Ireland’s Carlin, only for the former Northern Ireland Open quarter-finalist to pull two legs back and keep the comeback alive. A scintillating 11-darter from Clark in the seventh leg sealed the victory for ‘Superman’ – who will return to the PDC scene after almost two years away.

26-year-old Reece Robinson – who lifted the British Masters in 2009 at just 19-years of age – denied three-time back-to-back Lakeside World Champion Glen Durrant a tour card as he defeated the Teeside ace 5-2 in the decider at Wigan’s Robin Park Leisure Centre.

Robinson got his day underway with a 5-0 whitewashing of Paul Walker, before back-to-back 5-3 victories over Stephen McNally and Callum Loose put him into the fourth round.

Wins over Kevin Lane, Sam Hewson and Jonathan Worsley moved Robinson within two games of a two-year two card, and he drew even closer as he survived match darts in the last eight in seeing off David Pallett in a deciding leg.

Robinson’s opponent, Durrant, came into the decider in good form, after dropping just 11 legs across the duration of the day in Wigan. The first four legs of the match went with throw, but the 26-year-old remained composed and reeled off three legs in succession to wrap up a monumental victory over the three-time World Champion.

Despite his tour card hopes being denied on Saturday afternoon, Durrant sits in a convincing position on the order of merit, with a run to the last 16 tomorrow all but securing his tour card and his fourth appearance at the UK Open – 14 years after making his debut.

Jonathan Worsley and Carl Wilkinson sit at the top of the UK Qualifying School order of merit and stand in good stead of being amongst those to win a tour card, while Lisa Ashton could potentially become the first female to hold a tour card for eight years with a run to the latter stages on Sunday, after producing a 106 average – the highest of the day – en route to the last 16 in Wigan.

Adrian Gray, Andy Boulton, Jamie Bain and Barrie Bates are also well-placed for a tour card via the order of merit, if they were not to win outright on Sunday afternoon, while BDO World Championship partakers Jim Williams and Conan Whitehead will be in need of a good run if they are to earn a debut tour card.

Play will resume on Sunday morning in Wigan with another two automatic tour cards on offer as well as an additional 11 ‘golden tickets’ via the final order of merit.