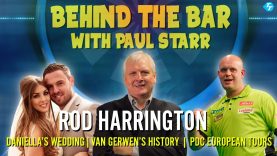 On this week’s ‘Behind the Bar with Paul Starr’ PDC Director and Sky Sports Darts commentator Rod Harrington joins Paul over a video chat.

Rod Harrington talks about:
– His attendance at Daniella Allfree’s (PDC Walk on Girl) wedding day.
– Michael van Gerwens win over last weekend at the World Grand Prix of Darts.
– Criticises some of the top players for not wanting to attend the European Tour Events.

Pictures from darts are taken by Lawrence Lustig/PDC