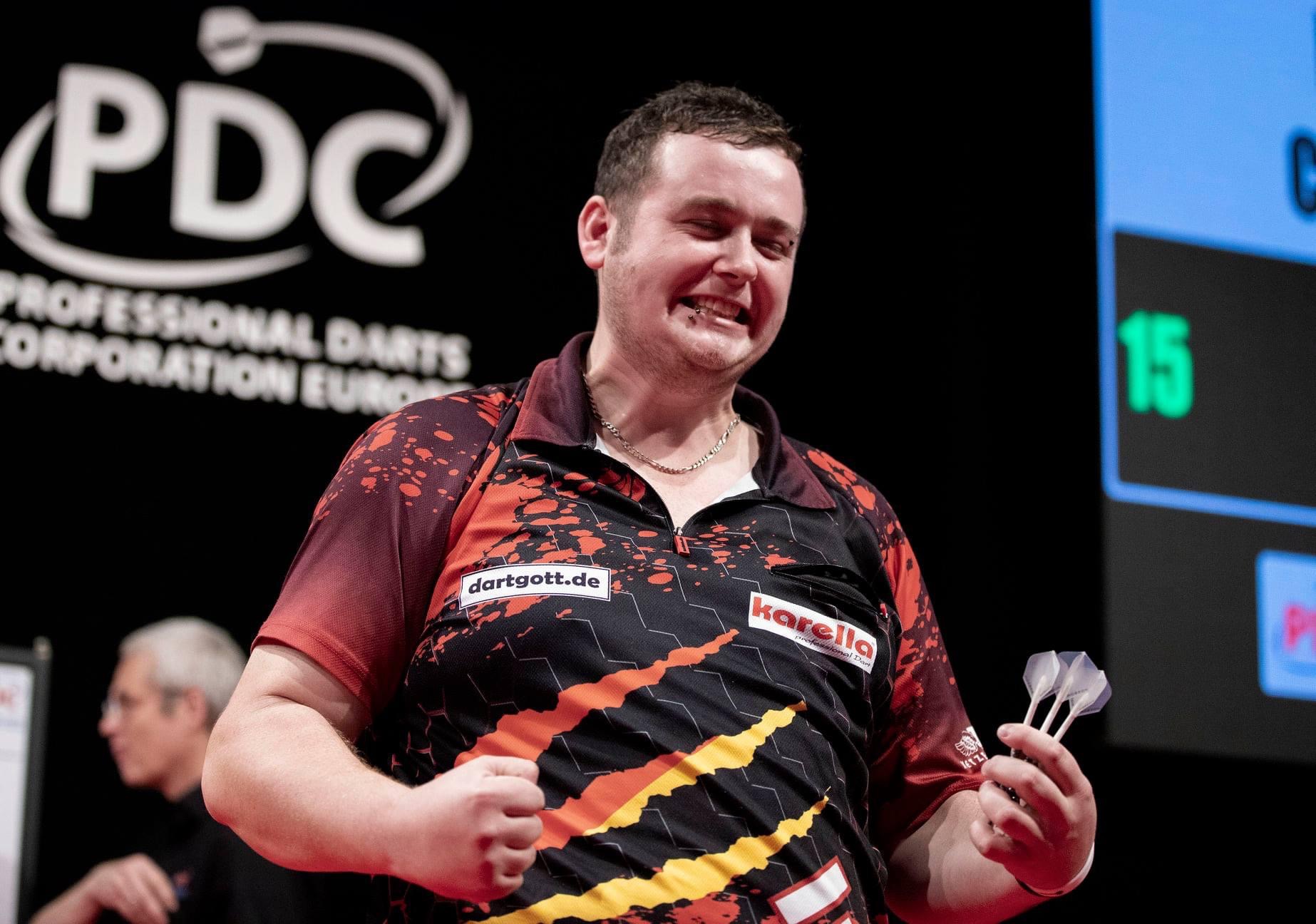 Roetzsch, who came through the Host Nation Qualifier on Thursday evening before overcoming Brendan Dolan in the opening round, completed a remarkable victory over the former world champion.

Having made his European Tour debut last month in Hildesheim, the emerging 25-year-old produced a scintillating 103.02 average to reach the third round and remain in contention of a European Championship debut.

It would be quite the story if Roetzsch was to qualify for next weekend’s tournament without holding a professional tour card, though, the carpenter by trade would need to defeat Krzysztof Ratajski beforehand.

Gibraltar Darts Trophy champion Ratajski gained revenge on Martijn Kleermaker after the Dutchman ousted him at the same hurdle last weekend in Sindelfingen.

‘The Polish Eagle’ registered an average just short of the 100 mark in seeing off Kleermaker, with ten squandered darts on the outer ring proving costly for the Welsh Open champion.

Meanwhile, reigning champion Gerwyn Price’s defence was rather brief as Ross Smith battled back from 4-0 behind to hand the world number three his first defeat in Riesa for three years.

A stunning Smith was in fantastic form on Friday evening, and recouped some of the stuff he produced in the first round in the latter stages of an inspired win over the newly-crowned World Grand Prix champion.

Portuguese sensation Jose de Sousa, who lifted his maiden European Tour title less than a week ago in Sindelfingen, was dumped out at the first hurdle at the hands of a magnificent Max Hopp.

De Sousa had the crowd firmly behind him as he scooped the spoils last weekend, but that was far from the case on Saturday evening against Germany’s number one Hopp.

Former German Darts Open winner Hopp fired home four maximums in the opening two legs, and convincingly defeated an in-form De Sousa, despite his form dipping towards the end of a splendid display.

Hopp faces Price’s conquerer Smith on Sunday afternoon, with the victor taking on either Dave Chisnall or Joe Cullen in an enticing quarter-final clash.

Cullen eased past Robert Marijanovic whilst averaging in excess of 101, before Chisnall topped the Bradford man’s excellence in clocking a mesmerising 104.43 in beating Dutchman Ron Meulenkamp 6-3.

Stoke-on-Trent’s Hamilton will take on Michael van Gerwen on Sunday afternoon after the world number one scrapped past Latvian Madars Razma in a lacklustre encounter.

Both Scott Baker and Jesus Noguera continued their inspired runs on their European Tour debuts, pulling off shock victories over Daryl Gurney and Ian White respectively.

After spurning a 5-1 advantage against Mensur Suljovic last weekend, Jamie Hughes will contest a rematch with the Austrian number one after defeating Steve West.

Suljovic narrowly defeated Germany’s Gabriel Clemens, with the German number two’s second round woes on the European Tour resuming. ‘The German Giant’ has staggering still failed to reach the third round on a single occasion.

Both James Wade and Nathan Aspinall will also clash in a repeat of their third round match just last weekend as the esteemed pair saw off Andreas Harrysson and Jason Lowe respectively.

Wade converted a mesmerising 167 checkout on his way to ousting the Swede, while Aspinall came through a deciding leg thriller against a resilient Lowe who failed to resist the pressure piled on his shoulders.

Smith pinned seven maximums as he raced to a comfortable victory, with seven squandered darts on the outer ring proving onerous for the current world number 57.

The International Darts Open reaches its conclusion on Sunday in Riesa as the third round takes place in the afternoon session, followed by the quarter-finals, semi-finals and final in the evening.

There will be a new name added to this year’s European Tour roll of honour following the early exits of Price and De Sousa and the failure in qualifying of Devon Petersen.