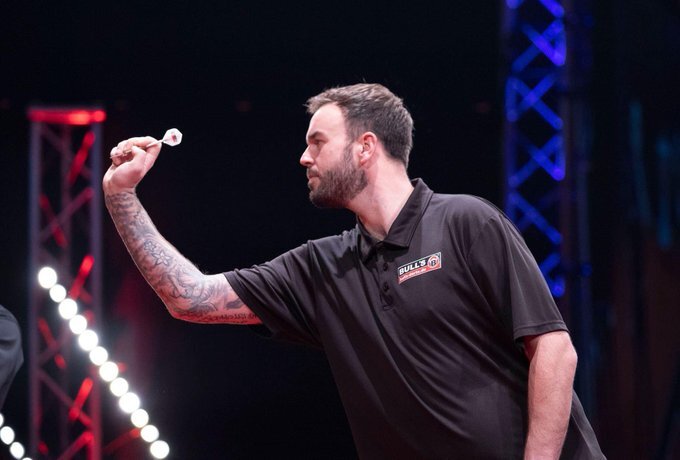 Ross Smith produced a sensational 112 average to beat Mario Vandenbogaerde at the International Darts Open on a good day for the host nation in Riesa.

‘Smudger’ won his six legs in 14, 13, 11, 10, 12 and 14 darts to see off the BDO World Championship semi-finalist and set up a clash with two-time defending champion Gerwyn Price, which could be incredible if Smith plays like that again on Saturday.

Elsewhere at the SACHSENarena, five Germans progressed to the last 32 including World Cup qualifiers Gabriel Clemens and Max Hopp.

Hopp beat Jelle Klaasen 6-1 with a very solid display, while Clemens averaged just under 100 to ease past Philipp Hagemann by the same scoreline.

Robert Marijanović was also in impressive form, whitewashing Jamie Lewis, whose confidence appears to be at rock-bottom.

In comparison to those three, Franz Rötzsch is a much newer name, but he played like an experienced professional in his win over Brendan Dolan.

The other German to move through to the second round was Martin Schindler, who beat Tytus Kanik 6-1. The Pole won his only leg with a mesmerising 170 finish.

In the race to next week’s European Championship, Ron Meulenkamp, Jason Lowe and Andy Hamilton all picked up big wins.

Meulenkamp didn’t play his best against Michael Rosenauer, but 4 180s were enough for a 6-2 win, while it was a similar story for Hamilton, who saw off Simeon Heinz.

West Midlands thrower Lowe was tested much more, though, and squeezed past European Tour debutant Scott Marsh in a deciding leg after a high-quality contest.

Two Spanish players came through the Tour Card qualifier, but they suffered contrasting fortunes in Riesa.

There was an important win for Scott Baker as he looks to retain his Tour Card at the end of the year, ‘The Mod’ beating Michael Unterbuchner 6-4, while Benito van de Pas’ hopes of staying on tour are fading after he fell to a 6-3 defeat to Sweden’s Andreas Harrysson.

Danny Noppert didn’t have to get out of second gear to win his game with Sebastian Pohl, but his countryman Martijn Kleermaker survived a huge scare against Arsen Ballaj, coming from behind to win in a last-leg shootout.

Saturday’s second round sees a repeat of last week’s match between Kleermaker and Krzysztof Ratajski, while Adrian Lewis and Stephen Bunting return to action against Noppert and Hamilton respectively.