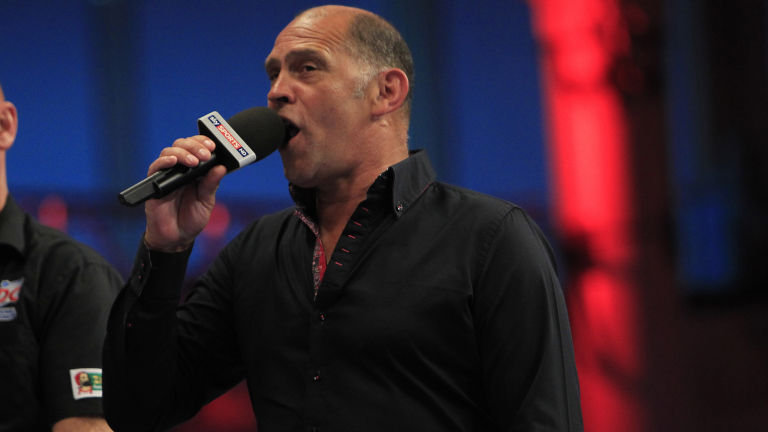 May I be struck by a Simon Whitlock bounce out for saying this, but darts should be boring. I mean, ‘should’ be. Lads chucking arrows at a coloured board? What’s the appeal there?

But this is the real irony – darts is not boring! Far from it! At its best, it is about the most gripping sport there is.

And of the many things which add excitement to the spectacle, alongside the passionate fans, the unpredictability of every leg, the high finishes and magical roof-raising nine-darters, are the callers themselves, all part of the personality of the game.

For a few quid you can have your photo taken at events with a darting legend and the likes of John Part and Keith Deller make this a popular option, but at the worlds in December last year it was evident that just as many people wanted their photos taken with the charismatic caller Russ Bray.

I need give no explanation for this. Anybody who knows and loves darts knows and almost certainly loves Russ Bray. He is almost as much a part of the appeal of the game as the players themselves.

So to be able to bring his vocal talents into your own pub, or games room, or garage is a real gift for anybody from the casual once-a-week player to the county players getting ready for a league game.

And with the Russ Bray Darts Scorer you can.

The app has it all. Not only does it have Russ himself calling the scores, he also calls ‘game on’ and ‘game shot’, as well as reminding you whose throw it is at the start of a leg.

The paid version (recommended) has ten levels to play against or you can simply add more players and play your friends. There are hundreds of pre-recorded names to choose from but also options to request new ones if needed.

As well as scoring your games, it also tracks your averages, including that of your first nine darts, your doubling percentage and highest checkout, as well as your best leg.

The settings allow you to speed the game up which is useful if you are playing alone, and you can also set play options such as sets best of, and as I said, you can select the level you wish to play against. Be warned, beating Level 10 would be tough for MVG, so there is a suitable challenge for any player.

There are dozens of darts apps on Play Store and sure, not everybody wants their scores announced so enthusiastically while they are practising, so look around and you will know which one suits you best.

But I for one love this app, not just because it makes me feel closer to the action of a real game, but because I get to see how I am playing and over time, improving.

Still waiting for my first Russ Bray 180 though.

Is Gerwyn ‘THE ICEMAN’ Price Melting?