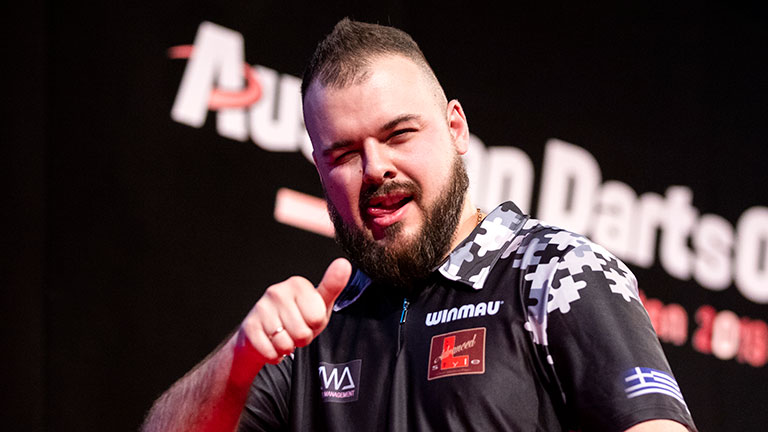 Russia’s Boris Koltsov sealed his maiden Modus A Night At The Darts triumph on debut, while Paul Nicholson claimed Group One as Week Three of the Modus Icons of Darts Live League commenced.

Koltsov, who was competing from his home in the Russian capital of Moscow, recorded a scintillating 105.25 average as he gained a winning start to his campaign.

Last week’s Icons of Darts Live League overall winner, Jason Askew, was swept aside by the Russian number one – who pinned five of his nine attempts on the doubles.

Subsequently, Koltsov suffered his first loss of the tournament at the hands of Martin Adams, with the three-time world champion fending off a mid-match comeback.

He proceeded to punish squandered attempts on the outer ring from last week’s A Night At The Darts winner Wessel Nijman, narrowly denying the 19-year-old – who missed multiple match darts.

Koltsov culminated his Group One success with a crucial win over David Evans in the group decider, clocking a second ton-plus average of the evening and 50 per cent on the outer ring.

The 31-year-old also pinned four maximums and checkouts of 81, 91 and 105 en route to a decisive victory.

Evans, himself, produced some stunning showings across the evening, with a 107 average in whitewashing Adams proving to be a particular highlight.

Nicholson, who finished fourth in last week’s overall standings despite winning two of the six groups, commenced Monday’s campaign with a doubling masterclass as he boasted a 100 per cent checkout rate in a narrow win over Andy Jenkins.

He then overcame a below-par Brazilian in Diogo Portela, before sealing a third successive win with victory over Adam Huckvale.

‘The Asset’ saved his best performance of the day for his culminating affair as he recorded a 101.32 average and pinned five out of his attempts eight on the outer ring in an emphatic 5-2 win over former world youth champion James Hubbard.

The Modus Icons of Darts Live League resumes on Tuesday morning from 11am as the A Night At The Darts initiative takes place following its conclusion, with coverage streamed live via a number of bookmakers’ websites and dartshop.tv.