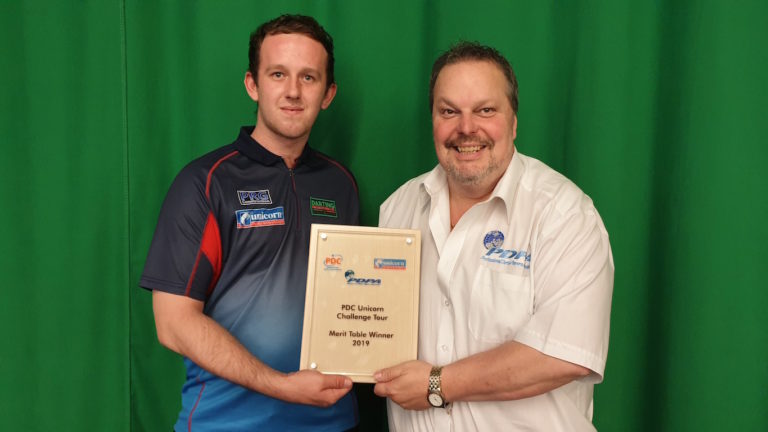 Callan Rydz and Jesús Noguera have earned two-year PDC Tour Cards after their performances on the 2019 PDC Challenge Tour, which concluded this weekend.

Rydz, who had come close to winning a Tour Card on several occasions beforehand, can now breathe a sigh of relief after his win at Event 18 was enough to overtake Cameron Menzies and finish the year top of the Merit Table, which also earns him a debut at the PDC World Championship in December.

For Menzies, it was an agonising weekend with his best result a last 32. He narrowly missed out on a top-two place for the second year running, and will have to go to Q-School in January.

However, he will take encouragement from the fact that Rydz has been in a similar situation and is now on the full tour for the next two years and going to the World Championship.

Noguera could still qualify for the Ally Pally via the South-East Europe qualifier, but will ensure the number of Spanish Tour Card holders remains at three with Jose Justicia looking set to drop off the tour.

Ciaran Teehan, Kyle McKinstry and Mark Barilli all won their first Challenge Tour titles in Wigan, while the likes of Stephen Burton, Boris Koltsov and Andy Jenkins threatened to break into the top two but will have to settle for free entry into Q-School next year and spots in the 2020 UK Open.

Teehan, who has been doing well on the Development Tour this year but was yet to win any PDC title, beat fellow Irishman McGuirk 5-2 to reach the final in his first ever Challenge Tour event.

He would face Berry van Peer, who saw off William Borland in a deciding leg, but it was Teehan who came out on top 5-2.

Cody Harris hit a 9-darter in the last 256 of Saturday’s second event, and he carried that momentum on for the rest of the tournament, beating Justin Smith 5-1 in the quarter-finals and recording an average of 102 against Matthew Dennant in the last four.

However, he came up short against Rydz in the final, who sealed a 5-1 success for his second Challenge Tour title of the year to go top of the Order of Merit going into Sunday.

As with the first event on Saturday, there were two Irish players in the last eight, and this time they both made it to the final. Northern Ireland’s Kyle McKinstry took the honours against a rejuvenated Jason Cullen, with a semi-final defeat for Rydz further solidifying his place as number one.

Once most of his main rivals were drawn into the top half of the draw for Event 20, it was confirmed that he would finally be a Tour Card holder from January 2020.

Andy Jenkins and Boris Koltsov threatened to overtake him with a title, but both lost in the last eight. Ciaran Teehan made a second final of the weekend, but lost out to Scot Mark Barilli in the final event of a fantastic season of Challenge Tour action.