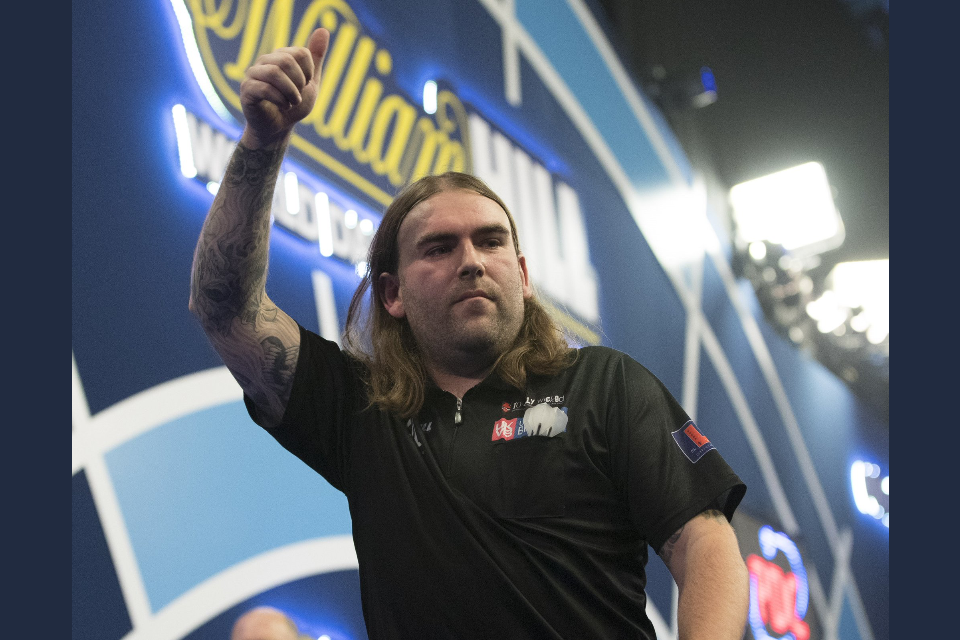 Ryan Searle produced a remarkable display of finishing, as he saw off 3 time BDO world champion Glen Durrant 6-4 on the opening day of the European Darts Grand Prix. It was the headline act of Round 1 in Sindelfingen, which also included impressive displays from the likes of Chris Dobey and Nathan Aspinall.

With the news of James Wade’s withdrawal from the European Darts Gran Prix, it added increased significance to the Searle-Durrant match, as the winner would receive a bye into the Last 16 on Sunday afternoon. Searle got off to an excellent start, checking out 110 on the bull to take the opening leg, before pinning the same target for a 119 finish to double his lead. He followed this up by taking out 84 to claim a 3-0 lead and give Durrant a mountain to climb. However, ‘Duzza’ was scoring much better than Searle, and reeled off 3 consecutive legs to level the match. Ryan took out a crucial 112 with Durrant sat on 24, and although Glen levelled it at 4-4, this was a major turning point. Searle held his throw to go within a leg of the match, and when Durrant failed to take out 62, the Somerset man pinned tops to claim an important victory for his World Matchplay hopes. ‘Duzza’ had a higher average by 6 points, so it was Searle’s doubling (67%) that got him over the line, and with a bye, into the Last 16.

Steve Beaton saw off another BDO world champion in Stephen Bunting to set up a tasty tie with Mensur Suljovic in the 2nd round. The match went on throw for the first four legs, before Beaton checked out 72 to get a crucial break of throw. In a game of fine margins, Bunting wired double 14 for a 121 to break straight back, allowing Beaton to pin a superb 111 checkout to lead 4-2. ‘The Bullet’ brought it back to 4-3, before missing one dart at tops to level the game at 4 all, and allowing Steve to open up a 5-3 lead. Bunting survived a match dart to peg a leg back, but when he failed to take out 57 to bring the game to a decider, the 1996 BDO world champion capitalised on double 10 to claim an excellent win.

Chris Dobey and Nathan Aspinall were the standout performers on day 1, both averaging around the 103 mark in comfortable wins over Madars Razma and Kim Viljanen. ‘Hollywood’ has been extremely unlucky with his luggage being misplaced on recent trips to Germany and Austria, but put these issues behind him to whitewash Razma 6-0, with only one leg finished in more than 18 darts. The UK Open champion Aspinall has been in flying form lately, and showed this again, as he flew into a 5-0 lead over Viljanen. The Finn took out a superb 79 checkout to avoid the whitewash, but there was no stopping ‘The Asp,’ as he finished 82 on the bullseye for a comprehensive 6-1 win.

Mark McGeeney, Gavin Carlin and Niels Zonneveld all enjoyed wins on their Euro Tour debuts, each of them seeing off tricky opposition in Sindelfingen. McGeeney saw off Josh Payne with a 6-3 win, a 121 checkout in the 7th leg being the crucial shot. Carlin was very impressive as he defied a boisterous crowd to see off the home favourite Dragutin Horvat 6-3. Both players struggled on the outer ring, but it was Gavin who scored much better with a first 9 average of over a ton. Niels Zonneveld claimed his first Euro Tour win with a tense 6-4 win over Michael Hurtz. Neither player was at their best, but the Dutchman fired in an excellent 103 checkout, before finishing the game with a 14 darter on tops.

It was another disappointing day for the Home Nation Qualifiers, with all 5 once again losing out in Round 1. Hurtz and Horvat went out to Zonneveld and Carlin, while Michael Rosenauer, Daniel Klose and Ricardo Pietreczko were seen off comfortably by Brendan Dolan, Keegan Brown and Jamie Hughes respectively.

Vincent van der Voort reeled off four consecutive legs to see off Challenge Tour star Dave Prins 6-4, having been 4-2 down early on. Krzysztof Ratajski also made a comeback, claiming the last 3 legs to see off the tenacious Welsh man Robert Owen by the same scoreline. Dimitri van den Bergh and Jeffrey De Zwaan claimed comfortable wins over Michael Rasztovits and Stefan Bellmont, winning 6-1 and 6-2, both averaging over 90. James Richardson saw off Matthew Edgar 6-3, while Ross Smith saw off the qualifier Pero Ljubic by 6 legs to 3 as well.