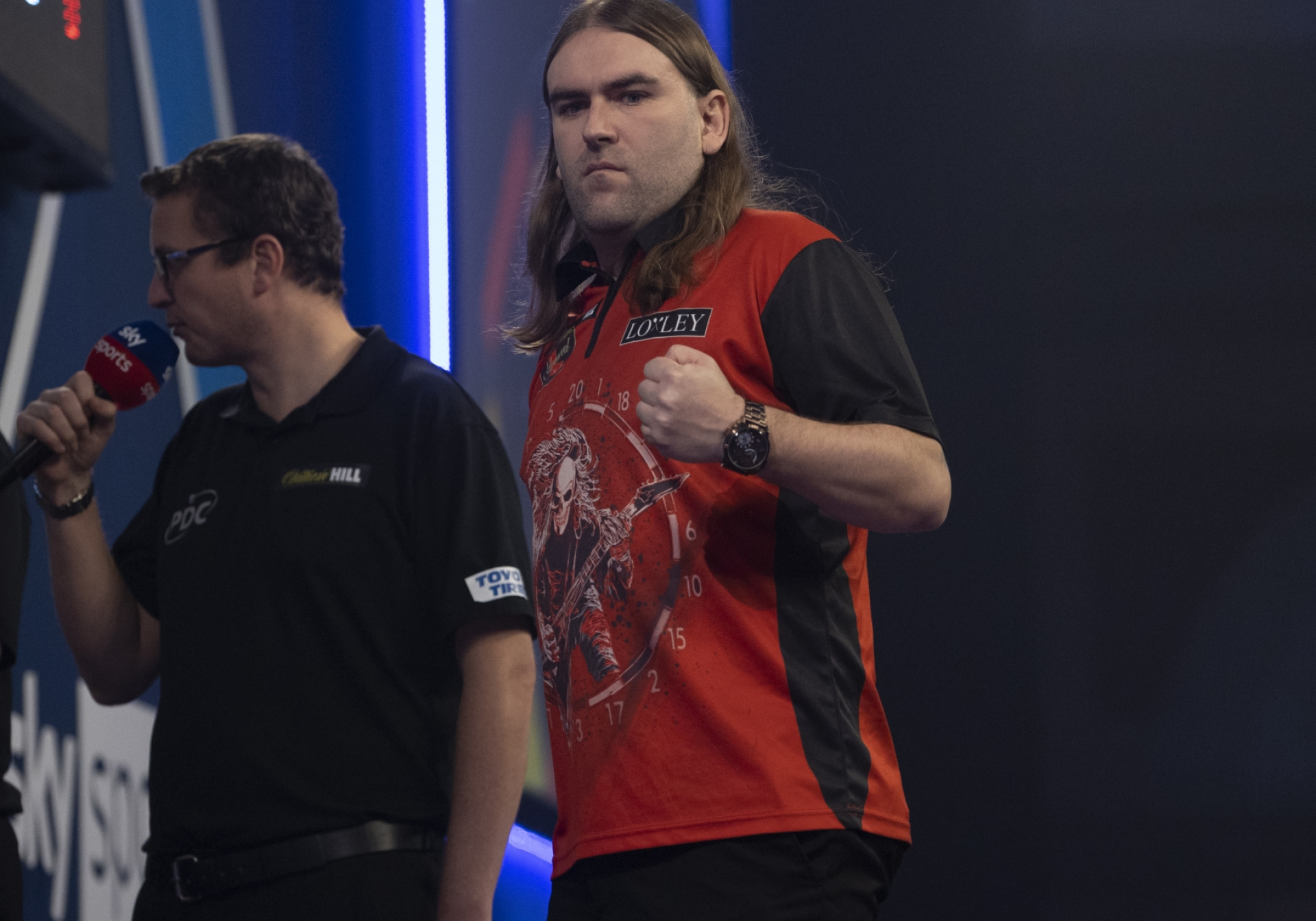 Ryan Searle beat a seeded player at the World Championship for the third year in a row as Jeffrey de Zwaan was one of five Dutch players to be eliminated from the tournament on day six.

‘Heavy Metal’ had been on runs to the last 16 and last 32 in previous years, and could go even further in the 2020/21 edition with Ian White or Kim Huybrechts awaiting in the third round.

The disappointment in the Netherlands was compounded by the news that Martijn Kleermaker had tested positive for covid-19 and couldn’t make his Alexandra Palace debut, with Cameron Carolissen receiving a bye after first reserve Josh Payne couldn’t take his place.

Sunday at the World Championship got underway with what was always going to be a tight clash between two ProTour rookies, Telnekes and Nick Kenny.

It was a nervy first set, which Telnekes snatched with a clutch 106 finish. Welsh debutant Kenny levelled up with three straight legs, but he couldn’t find his form once again in a fifth-leg decider and Telnekes took it comfortably to lead 2-1.

Kenny took it to the final set with a 119 checkout, and then he upped his game to win fairly comfortably in the end and set up a second-round meeting with Jermaine Wattimena.

Dmitriy Gorbunov struggled to get going against his fellow debutant, the very capable Jason Lowe, and as a result, the West Midlands thrower won the first two sets for the loss of only one leg.

However, the Russian stormed into life in set three as finishes of 141 and 116 helped him halve the deficit. He took the fourth set to the last leg, but a 12-darter from Lowe was timed to perfection as it won him the match 3-1.

Matthew Edgar was desperate to win his first match at the World Championship at the third attempt against Maik Kuivenhoven, in a game that could go some way to determining whether these players still hold Tour Cards at the start of 2021.

In truth, Kuivenhoven never got going and struggled to respond to Edgar’s three-leg burst to take the opening set. He did have five darts to take the second set to a deciding leg, but a 112 checkout from the Daventry thrower doubled his advantage.

That gave him the boost he needed to complete the victory, three straight legs sealing a comprehensive progression to round two for Edgar.

The last game of the afternoon saw Ron Meulenkamp looking to finally move past the last 64 of the World Championship, at the fifth time of asking.

It looked like he would end that hoodoo after a great display of finishing saw him lead 27th seed Vincent van der Voort 2-0.

However, ‘The Dutch Destroyer’ embarked on what would become yet another successful comeback from two sets down. He had to do it in a decider, but his experience told and the nerves never affected him.

Development Tour winner Meikle has shown plenty of signs of improvement recently, but losing the first set 3-2 turned out to be a hammer blow as NHS worker Brown quickly won the second set.

A 12-darter and 13-darter saw ‘The Barber’ impress in set three, but Brown’s finishing was too good and saw him win in straight sets despite finishing with a lower average.

Then came the De Zwaan-Searle contest, which flew by as expected. It really was a tale of supreme timing from ‘Heavy Metal’, who capitalised on double trouble from ‘The Black Cobra’ to win 3-0.

World Cup winner Jonny Clayton doesn’t have the best World Championship record, but he staved off a mini-comeback from John Henderson to reach the last 32 for the third time.

‘The Ferret’ reeled off the first two sets without too much trouble, before his Scottish opponent came back in set three. Henderson also led 2-0 in the fourth set, but Clayton managed to get over the line with three consecutive legs.