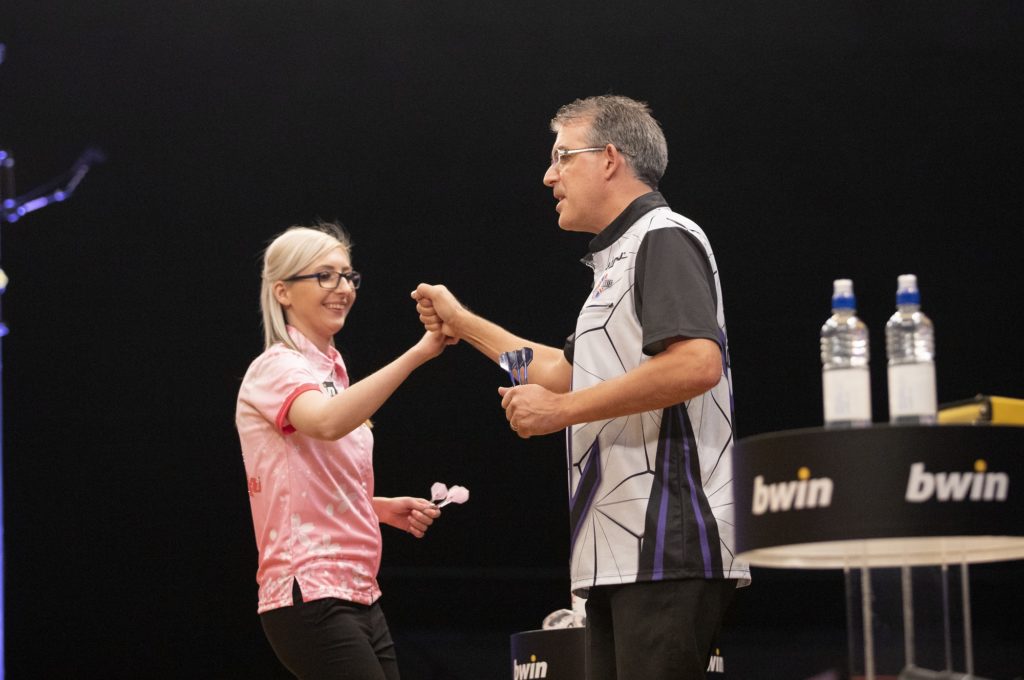 Fallon Sherrock surrendered a four-leg advantage in a narrow defeat at the hands of Canadian Jeff Smith as the World Series of Darts Finals commenced in Salzburg, Austria.

Despite the 2020 World Series of Darts circuit being cancelled due to ongoing effects of the coronavirus pandemic, the World Series Finals began on Friday evening as a stand-alone staging.

Spectators returned to the venue after a six-month absence, and the history-making Sherrock reappeared on the global stage in a 5-4 defeat against former BDO World Championship finalist Smith.

Smith capitalised on a slow start from Sherrock, pinning double 16 for the opening leg of the match, but the female thrower responded with her first maximum and a 12-darter to restore parity at one apiece.

Sherrock then took the lead for the first time, before doubling her advantage following a slender miss on double 19 for an impressive 155 checkout from the Canadian.

The 26-year-old would continue to pepper the treble bed and completed an 11-darter to move 4-1 ahead, prior to moving on the brink of victory with a 17-dart leg.

Nevertheless, Smith upped the ante and reeled off four legs in succession to force a decider, before converting a tremendous 109 checkout to seal success with Sherrock waiting nervously on a two-dart combination checkout.

Elsewhere, Poland’s Krzysztof Ratajski scuppered the hopes of the Austrian crowd as he defeated his old soft-tip enemy Mensur Suljovic to set up an enticing second round meeting with Michael Smith.

Suljovic recorded an average in excess of 102 and three maximums, but nine missed doubles proved costly for the Austrian number one and Ratajski prevailed to the second hurdle.

Former World Matchplay finalist Suljovic raced out of the gates, pinning a magnificent 121 checkout in the opening leg, before doubling his lead in 14 darts on double four.

Ratajski replied with impressive 144 and 141 checkouts of his own to claim two of the next three, before reeling off four consecutive legs to leave Suljovic extremely disappointed.

Van der Voort opened proceedings with a 13-darter, before punishing Cullen for multiple missed doubles on the outer ring in the subsequent three legs to move 4-0 in front, and closed out an emphatic win with legs of 13 and 14 darts.

The reigning Brisbane Darts Masters champion was unable to defend his crown down under last month due to the current global health situation, but made amends with his first win in the annual invitational.

Heta battled back from 3-1 and 4-2 behind and survived two match darts against the Stoke-on-Trent man, before closing out a 5-4 victory with his third maximum and a 14-darter in the deciding leg.

Elsewhere, Lithuania’s Darius Labanauskas progressed to the second round with a comfortable 6-2 win over youngster Harry Ward, while Steve Beaton defeated Simon Whitlock in a closely contested affair.

Both Beaton and Whitlock pinned two ton-plus checkouts and forced a decider, with Beaton surviving a match dart on the bullseye and pinning double 12 to prevail.

New Zealander Cody Harris stunned an out of sorts Dave Chisnall – who averaged a mere 78.92 in an extremely disappointing performance in Austria.

Harris claimed the opening two legs but Chisnall restored parity with two legs of his own, including a 119 checkout. From there, the Kiwi reeled off four in succession to down Chisnall at the first hurdle.

The World Series of Darts Finals resumes on Saturday evening in Salzburg as the eight seeded players enter the fray, including both Van Gerwen and reigning world champion Peter Wright.