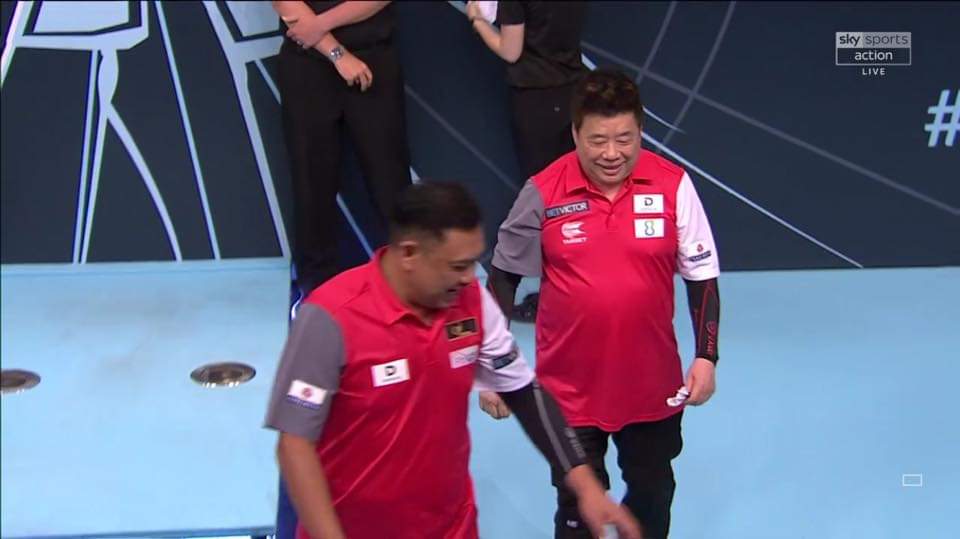 Shock exits at PDC World Cup of Darts on Night 1

Singapore legend Paul Lim turned back the clock on his near 40 year darts career and alongside his pairs partner Harith Lim rolled over the much fancied Welsh team of Gerwyn Price and Johnny Clayton on their way to a 5-3 win in round one. This alongside Northern Ireland crashing out to South Africa were the shock exits on night one in Hamburg.

The Singapore Slingers, who previously put out tournament favourites Scotland in 2017 and also gave England a fright last year, have now put out Wales to keep an impressive first round winning record going strong.

Singapore could have closed out the game sooner had Paul not missed a few doubles but when it went to 3-3, they never looked like losing the seventh leg and then you could visibly see pressure starting to really build on Wales. Johnny Clayton missed a dart at double 16 to draw level and Harith Lim came back for 32 and hit it agonisingly with his last dart in hand to send Wales home from Hamburg.

I did predict a tough game for Wales in my previous post and said it was down to which Harith turned up. Well he turned up well tonight and now will be favourites against the Japan team in round 2.

Singapore averaged 92.51 compared to Wales, who only recorded 83.22 as they missed 14 darts at double.

“It was a great game and we’re so happy to win. Both sides missed some doubles but we managed to hit five good legs.”

“We will take one game at a time and can’t underestimate any team. We know the Japanese guys well from the Asian Tour and we’ll do our best.”

South Africa cashed in on a lacklustre Pairs performance by Northern Ireland to stun the 6th seeds, with Devon Peterson hitting a 74 (T14,D16) checkout in the deciding leg.

Brendan Dolan had a chance to wrap up the game at 4-3 but fluffed his lines and allowed South Africa back to board to finish the leg and draw level. Then they were put out in the deciding leg. It was heartbreak for Gurney who was not at his best, but did not have a full firing Dolan to back him up. Maybe the NI team should have practiced together more in the lead up to the event.

Daryl Gurney and Brendan Dolan were heavy favourites for the win here in round one but were out finished by Petersen and his newcomer partner Vernon Bouwers.

“It’s a brilliant win but I think in the end we deserved it too.”

“We knew what we were up against but the pairs match is different because they don’t have the same rhythm.

“Vernon showed his class early on and kept us in the game and in the last leg I knew that I needed to step forward.

“It’s phenomenal for us, not just for us as individuals but for darts in Africa. It shows that we can progress the sport in Africa now.”

Moving on to the Scottish team of Gary Anderson and Peter Wright and there were no fears of shock result here. Scotland ran out a 5-0 winner against Denmark.

They averaged 101 and hit five of their eight darts at double in a brisk and emphatic win.

Peter Wright looked in good form and back to his standard darts. Gary Anderson looks to have lost a bit of timber which can only be good for the back and once he gets in the zone – is there a better player on planet darts?

It was good to see Gary back on our screens. He is the best player in my opinion, better overall than MVG…

“We don’t play pairs very often so it’s hard to get into a rhythm but we got through. The darts are going well in practice so we’ll see what happens this weekend.”

Scotland will now play Sweden, who came from one leg down to win 5 legs on the trot to hammer Brazil into submission. It was a good result for Sweden and a nice way for Magnus Caris to start off his last tournament, before his impending retirement.

“Playing with Dennis is a pleasure and when he hit the 141 I felt that we would win.”

“He hit some good doubles and I’m thrilled that I can play again on Saturday.”

Host nation Germany won with the same result 5-1. Hungary were not at the races and didnt really test Germany.

Max Hopp and Martin Schindler, only averaged 87 and missed 11 darts at doubles but it was still higher than the Hungary pairs average of 74.

The most entertaining part of that match was seeing Max Hopp knocking over the water on the table!

“It was not easy for us and it was difficult in the beginning but we got through it.”

Belgium are one of the dark horses for this World Cup and they took little time in brushing Hong Kong aside to set up a match with neighbours Germany, winning 5-1.

Hong Kong’s Royden Lam took out a 141 finish in leg two to level the scores to 1-1, but that was all she wrote for Hong Kong. PDC Youth Champion Van den Bergh sealed their fate with a 136 finish for 5-1.

“We’re very happy with that because the first round is never easy and I think we did well.”

“This is a special tournament and it’s a tournament that brings the best out of you.

“Other teams might be favourites, but as a pair we can match anyone. If we play like we can, then we have a great chance.”

New Zealand won through their tie with Lithuania 5-1. I expected a closer result but Cody Harris played well throughout showing why he has been doing well on the Challenge Tour. They now face unexpected South Africa and have a real chance now of getting to the quarter finals.

Harris showed the experience he has gained competing on the PDC circuit for the past 18 months with an early 110 finish as New Zealand moved into a 4-0 lead.

Lithuania’s Labanauskas took out 100 to get the whitewash away in leg five, but Harris got the win with a classy 124 checkout in the last leg.

“Playing over here with all these top players has helped my consistency. We can’t wait to play South Africa now – all the teams are really good and on the day it’s anyone’s game.”

The other game kicking off the night was Gibraltar versus Japan. Dyson Parody played well and got stronger as the game progressed for Gibraltar as his team went ahead 4-2 but some dogged and brave darts from Japan saw them claw their way back to 4-4 and Seigo Asada pulled out a 104 finish in the deciding leg to set up a mouth watering tie for the Asian TV market of Singapore vs Japan in round 2.

PDC World Cup of Darts: Wales and Northern Ireland Out on Opening Day