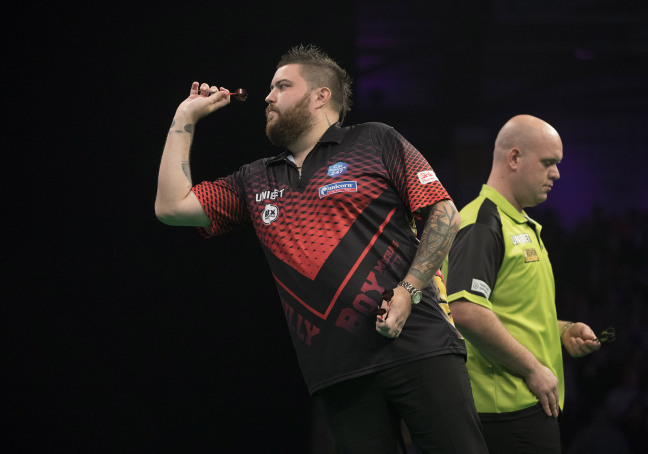 Michael Smith and Michael van Gerwen will contest a mouth-watering third round contest on Sunday afternoon as the Expo Hasselt, while host nation hopes were scuppered on a sublime Saturday in Belgium.

Smith, who pinned the first Premier League nine-darter on Thursday evening in Dublin, defeated Ronny Huybrechts, producing an assured showing as he averaged 103.28 and issued 50 per cent in the finishing department.

“It’s my first win on the European Tour for I don’t know how long, it feels good” were the words of Smith – who now faces world number one van Gerwen in the third round.

Similar to Smith, van Gerwen defeated one of the the four Belgians remaining in the tournament as Mike De Decker was handed a 6-3 ousting from the three-time world champion.

‘Mighty Mike’ averaged just below the 100 mark and narrowly missed double 12 for his second nine-darter since making the decision to change his darts.

Number two seed Ian White endured a first hurdle exit as the in-form Dirk van Duijvenbode, who has recently had a board fitted in his workplace, claimed his first career triumph over the Stoke-on-Trent thrower.

Reigning world champion Peter Wright got back to winning ways following Thursday’s Premier League defeat as he overcame Andy Hamilton, while his third round opponent Danny Noppert was significantly more impressive, averaging 108.96 in an all-Dutch contest with Jermaine Wattimena.

Krzysztof Ratajski and Rob Cross will collide in an eye-catching third round clash. ‘The Polish Eagle’, who pinned a 114 checkout early on, landed in Hasselt with a finishing masterclass in a 6-2 rout of Germany’s Gabriel Clemens.

Former world champion Cross secured his place in the final day as he achieved revenge on Damon Heta – who defeated the world number four in the Brisbane Darts Masters final in the summer.

Cross’ fellow Premier League competitor Glen Durrant suffered a shock defeat at the hands of former World Masters winner Mervyn King. ‘Duzza’ averaged 99.91, though, his opponent was in blistering form, recording a 105.98 and 60 per cent on the outer ring.

‘The King’ will contest a contrasting clash in the third round as he faces the lightning-quick Dutchman Martijn Kleermaker – who upset Joe Cullen in the second round.

Gerwyn Price eased through with a comfortable win over Wesley Plaisier, while another Premier League participant in Nathan Aspinall also breezed into Sunday’s finals day with a 6-3 victory over Steve Beaton.

Recent Players Championship Three winner Ryan Searle was ousted in the second round thanks to Mensur Suljovic – who will face Steve West on Sunday as the recent nine-dart hero saw off Premier League challenger Jonny Clayton.

The inaugural Belgian Darts Championship will resume from 12pm on Sunday afternoon, with the highly-anticipated 2019 World Championship final rematch getting proceedings underway.