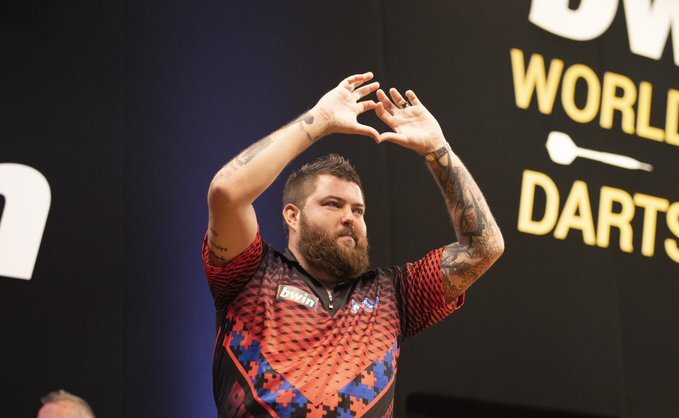 Michael Smith continued his perfect record at the PDC Winter Series, coming from 4-1 down to defeat José de Sousa in a deciding leg and win Players Championship 20 in Coventry.

‘Bully Boy’ ended his two-year wait for a PDC title on Tuesday, and he made it 12 in total with a series of excellent performances, denying an on-fire Gabriel Clemens in the quarter-finals, before surviving an early surge from De Sousa in the final.

The day began with several surprising big-name exits, none more so than Peter Wright, who was beaten 6-5 by Kai Fan Leung despite having a 107 average.

Krzysztof Kciuk picked up a rare win on tour in style with a 110 average in whitewashing John Henderson. Andy Boulton, Danny Noppert and Stephen Bunting also impressed in round one.

The last 64 saw Clemens back up a 112 average with a 106 as he beat Peter Jacques 6-3, while Smith performed similarly in demolishing Matthew Dennant and Daryl Gurney beat Jesús Noguera in a high-quality contest.

The majority of the top players successfully negotiated the second round, with Jonny Clayton, Stephen Bunting and Jermaine Wattimena the only seeded casualties.

The standard went up a notch in the last 32 as exactly half of the winning players averaged over 100. Clemens beat Jamie Hughes with a 108, while Darius Labanauskas eased past Luke Woodhouse with a 106 and Ryan Joyce thrashed top seed Gerwyn Price with a 107.

James Wade, Rob Cross and Daryl Gurney were beaten at that stage as the tournament started to take shape.

In round four, ‘German Giant’ Clemens was at it again as he looked for his maiden PDC title, averaging 112 for the second time in the day to beat Joyce 6-3.

Kciuk’s ground-breaking run came to an end at the hands of Labanauskas as Keane Barry was also beaten narrowly and Brendan Dolan and Vincent van der Voort made it back-to-back quarter-finals.

The best display of the last eight by a distance came from Smith, who ended Clemens’ charge with a 109 average.

The semi-finals saw a simply sensational performance from De Sousa blow away Cullen as the Portuguese hit seven 180s and averaged 110 to book a third PDC final of the year.

He would play Smith in the showpiece match as the Shanghai Master beat Van der Voort 7-3, finishing it off with a 12-darter.

De Sousa got off to a flying start in the final, winning three legs in 35 darts to take his early average to 115 and lead 4-1.

However, his level dropped off slightly after that, allowing ‘Bully Boy’ to reel off four straight legs and seize the initiative at 5-4.

It swung back and forth from then, with De Sousa leading 6-5 before Smith turned it back in his favour at 7-6. ‘The Special One’ forced a decider, but St Helens man Smith pinned double 10 with his last dart to continue a dream week and pocket another £10,000.

Rowby-John Rodriguez and Andy Hamilton both pinned nine-darters on an entertaining day at the Ricoh Arena.

Smith is now the big favourite to top the Winter Series Order of Merit after the five events, with Wattimena still in pole position for the Grand Slam spot.

In the race for the World Championship, Rodriguez replaced Wayne Jones in the provisional field and Mike De Decker’s run to the last 32 moved him a step closer to an Alexandra Palace debut.