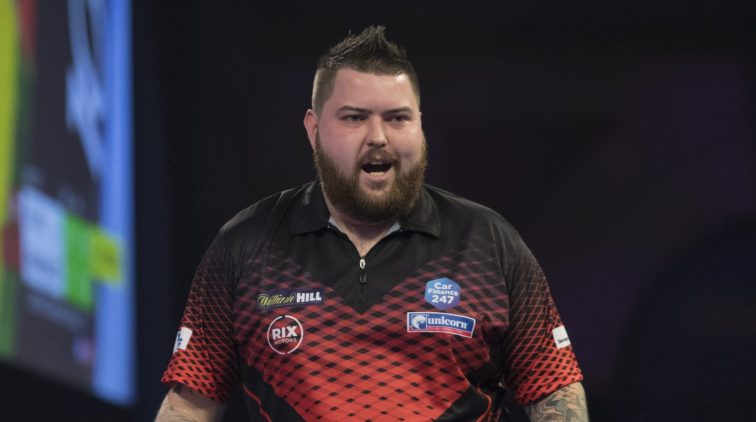 Michael Smith hit four maximums and rattled off a 113 average to beat Nathan Aspinall 5-1 on the second day of the 2019 Grand Slam of Darts in Wolverhampton.

Smith’s win sees him qualify for the knockout stages with a game to spare, following Glen Durrant’s 5-4 win over Martin Schindler in Group H.

The Bully Boy came out the traps flying and continued the form throughout with his end game average of 113.62 being the third highest in the history of the cross code event.

Elsewhere Durrant, a PDC Tour card holder who is representing the BDO as their World Champion, broke the duck in terms of victories by their representatives in the afternoon session before Jim Williams chalked a win for the Organisation after beating Ross Smith 5-1 in Group A.

Group A’s other game saw Michael Van Gerwen beat Adrian Lewis 5-2. Jackpot did race into a 2-0 lead, showing glimpses of the Lewis which won two World titles. But, Van Gerwen clawed back and won the last five legs to secure the win convincingly.

James Wade beat Ian White 5-4 in a thriller in Group B. White went 4-2 up in the clash before the Machine won the remaining three legs in style with both players producing their best as the game went on.

Steve Lennon beat Wesley Harms in the groups other game, leaving Wade on top with four points before facing the Irishman Lennon, with all four players having the chance to qualify for the last 16.

In Group C, Gerwyn Price qualified for the knockout stages after a last leg victory over Robert Thornton whilst Dimitri van den Bergh kept his hopes of qualification alive with a 5-1 win over BDO Women’s World Champion Mikuru Suzuki.

Gary Anderson has edged closer to qualification from Group D following a 5-3 win over Willie O’Connor, whilst Darren Webster beat Dave Parletti 5-2, who is hoping for a Anderson win to keep his slim chances of staying in the tournament alive.

Dave Chisnall kept his good run of form recently going after he qualified from Group E with a game to spare following a 5-3 win over Rob Cross in the final game of the afternoon session. Chisnall’s qualification coincides with the exit of Lisa Ashton from the competition after she succumbed to a 5-1 defeat against Jamie Hughes.

Gabriel Clemens qualified through Group G following a 5-4 win over Daryl Gurney. The groups other game saw another BDO player go down 5-1, this time it was World Trophy finalist Richard Veenstra losing by that scoreline to Brendan Dolan.