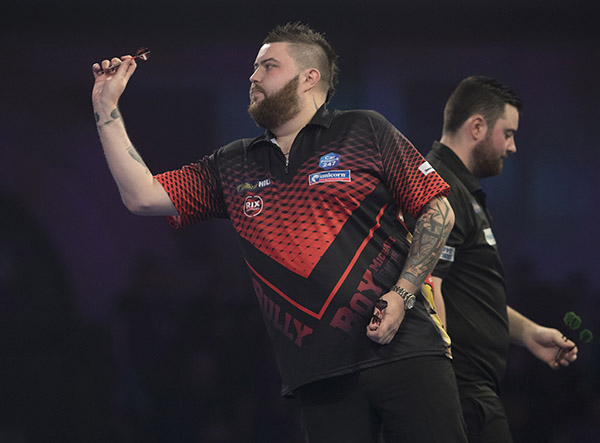 Smith: ‘My dream is another step closer to reality’

Michael Smith breezed into his first ever World Championship semi-final as he thrashed debutant Luke Humphries at Alexandra Palace.

Smith produced a scintillating showing in a dominant performance; he averaged 103 and hit eight maximums in a 5-1 rout of 23-year-old Humphries.

‘Bully Boy’ sealed the opening set courtesy of a 117 outshot before doubling his lead in set two without a reply from the back-to-back Development Tour winner.

Humphries converted a vital 170 checkout to avoid the whitewashed and get a set on the board, only for St Helens’ Smith to regain his two set advantage with a 3-1 win in the fourth set.

It was plain-sailing from there on for Smith as, despite Humphries pinning a sublime checkout of 151, Smith clinched the next two sets to wrap up a prosperous 5-1 victory.

“My dream is another step closer to reality now,” said Smith. “I’m pleased with my scoring but not my doubles-hitting.

“The way I was two or three years ago that game probably would’ve turned out differently but I’m a different player now and I put my foot down when I need to.

He added: “I told my son the only time he can come on the stage is if I win this trophy, I’ve never even touched the trophy myself and I won’t do so until I win it.”

Both Nathan Aspinall and Michael Smith alluded to their World Championship exploits as a ‘dream’, and they will open Sunday’s evening session in what will be a frantic clash.

Aspinall: ‘The dream isn’t over yet’

Van Gerwen: ‘I need to make sure I’m sharp’