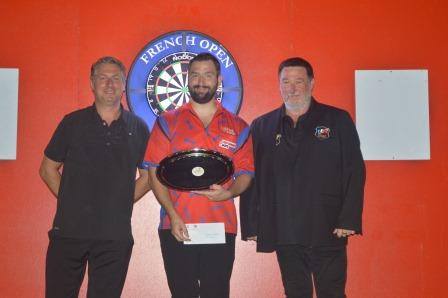 Coventry’s Smith-Neale beat Lancashire’s David Evans 5-0 in his first final since the Slovak Open in February to win the Category C tournament and the €1200 top prize; a first ranking title since his sensational World Masters win last October.

Smith-Neale recorded a 5-0 whitewash in that game before recording the same result against Evans, who followed up his run to the French Open semi-finals the day before to reach his first BDO ranking final.

‘Stretch’ saw off the likes of Philip Blenk, Baran Oezdemir, Pascal Devroey and Geert De Vos to reach the semi-finals, where he beat Dennie Olde Kalter 5-3.

With that run, Olde Kalter moves himself into contention for the Western European regional qualifying position for the 2020 World Championship. The Dutchman is now 11 points behind the Frenchman Thibault Tricole, who was beaten in the last 32 by Brian Raman.

Lisa Ashton made her fifth final in five ranking events entered this month in the ladies classic, only to get edged out 5-4 by Aileen de Graaf.

‘The Lancashire Rose’ had only dropped one leg before the final but she couldn’t get past de Graaf, who had beaten Andreea Brad, Paula Jacklin and Deta Hedman before defeating Ashton to win her sixth ranking title of the year and her 12th of the season.