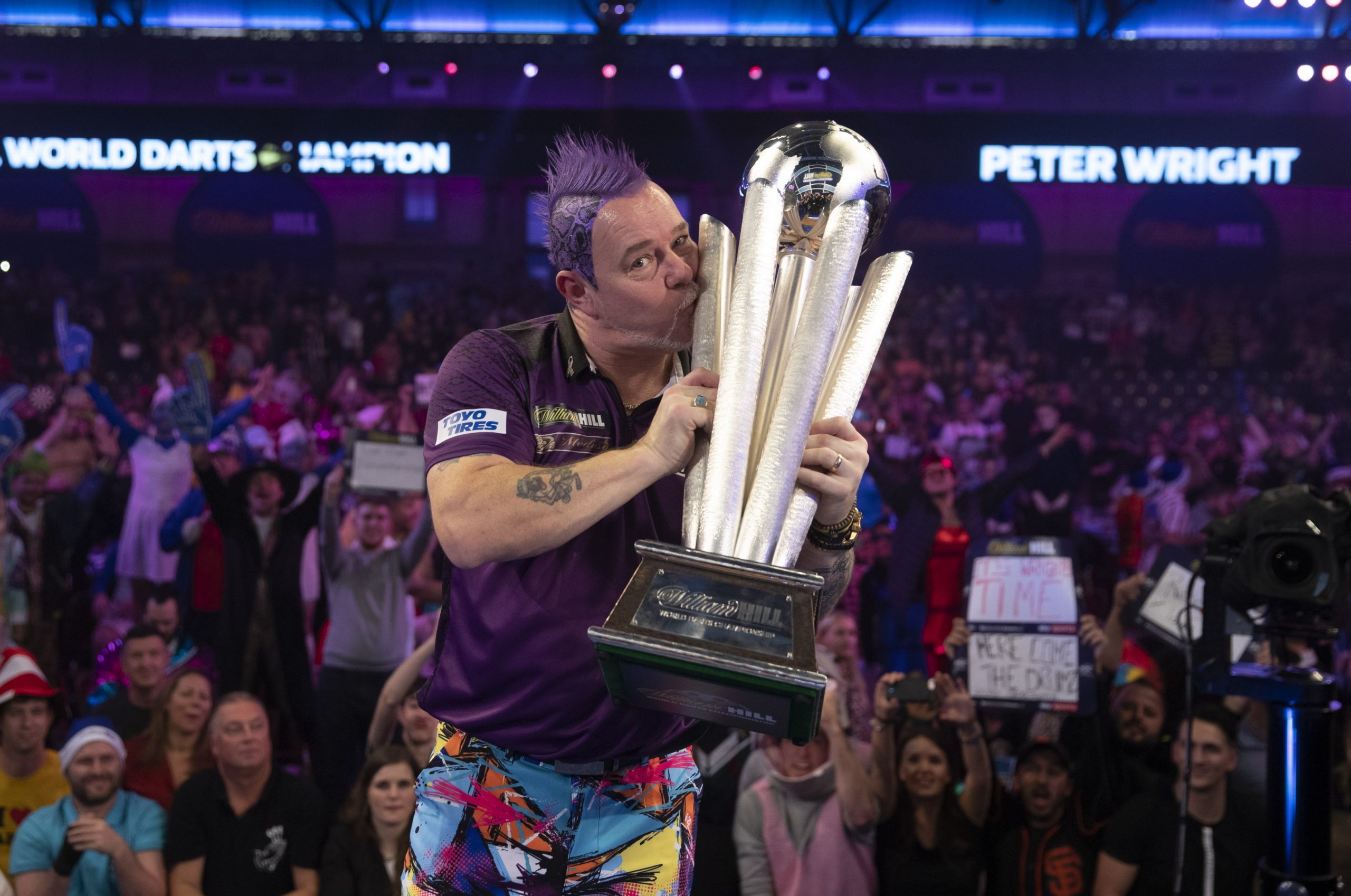 Peter Wright was crowned champion of the world for the first time on New Year’s Day at Alexandra Palace after seeing off Michael van Gerwen 7-3 in a high-quality final.

At the age of 49, the flamboyant Wright has scaled the highest peak possible in his chosen profession – six years after embarking on a career-defining run to the final, aptly losing out to the Dutchman, van Gerwen.

The Scotsman held the advantage throughout the duration of the final, with double 10 being pinned to lift the prestigious Sid Waddell Trophy and the showpiece of the sport.

“I can’t quite believe it,” expressed Wright following his historic victory. “I thought about giving up before I reached the final six years ago, but this shows that you should never give up on your dreams.

“Michael is an excellent champion and deserves everything he has won, but it was my turn and it feels brilliant.

“I’ve worked so hard on finding the right darts, the right throw and the right mentality, and it all came together at the right time.”

He added: “I am really proud of myself, and really grateful of everybody that has helped me become world champion.”

The ninth name on the Sid Waddell trophy…

Peter Wright lifts the famous trophy for the very first time and secures himself £500,000

Averages and scoring ability was equal in a scintillating showing from both major champions, though, Wright’s 50% checkout completion rate proved an essential factor.

The 49-year-old crucially claimed the opening two sets of the tie, and remained on the front foot for the entirety, despite the Dutchman whitewashing him in the third set and subsequently levelling proceedings at two-a-piece.

Squandered opportunities at the outer ring began to creep into the defending champion’s game, as the former UK Open champion regained a slender advantage, with a set-sealing 96 finish.

The same finish that saved his skin against Malicdem is taken out again to break the Van Gerwen throw in the fourth set! pic.twitter.com/pzbTyIuR5G

A two-set lead in favour of Wright came into existence for a second time in the match; three successive 80-plus outshots were nailed by the Suffolk man in a set six whitewash.

Van Gerwen managed to pull one back in the seventh set, only for Wright to convincingly reel off the next three sets and become the fourth Scottish world champion, joining Les Wallace and two-time champions, Gary Anderson and Jocky Wilson.

Although it may seem like a different tournament in the mind of ‘Snakebite’ right now, he was very nearly defeated in the second round at the hands of Noel Malicdem of the Philippines, holding his nerve with a skin-saving 140 checkout, before brushing aside Seigo Asada at the following hurdle.

An inspired Jeffrey de Zwaan comeback was also denied by Wright – who averaged 102.79 in the world final – before wins over Luke Humphries and Gerwyn Price handed him his second darting masterpiece appearance.

In a tournament dominated by individual breakthroughs, from Fallon Sherrock’s history-making exploits to Raymond van Barneveld’s damp squib of a retirement, Peter Wright emerged a rather fitting champion.

A cabinet has remained in his Suffolk home for many years in the hope of being crowned best in the world, that cabinet with now be filled with the appropriate silverware.

As part of the Darts Show a good couple of years ago was this filmed.@snakebitewright will now fill that cabinet that has remained in his Suffolk home for many years. #WHDarts pic.twitter.com/S7VmPyO8RB