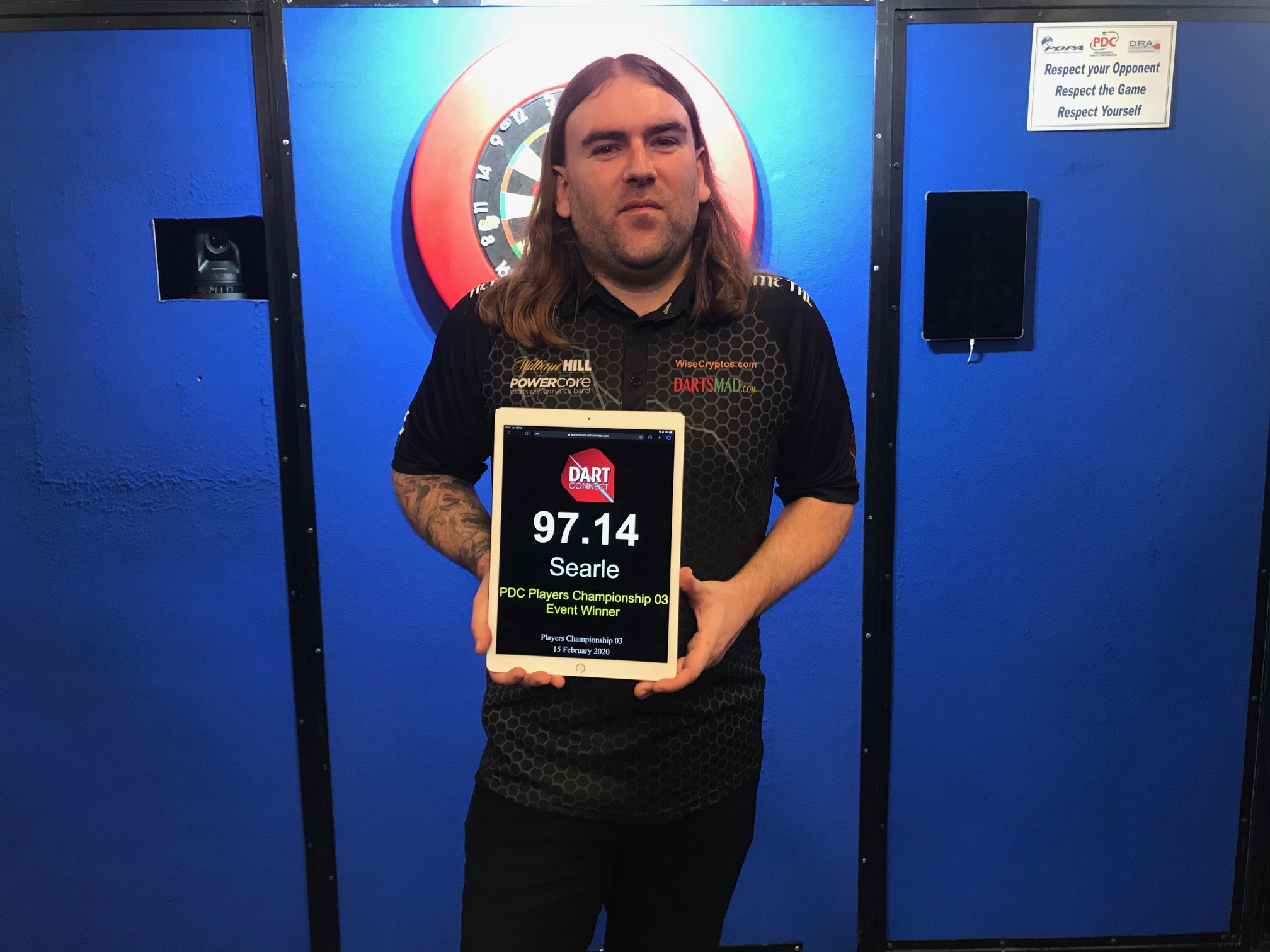 Ryan Searle claimed his maiden PDC title as he produced a sensational string of displays to win Players Championship Three in Wigan, culminating a splendid Saturday with an 8-6 scalp of world number one Michael van Gerwen.

After finishing a close second to former world champion Rob Cross on the 2016 Challenge Tour, Somerset-born Searle has risen through the ranks and now joins an elite group of professionals to have lifted PDC crowns.

Searle was a significant underdog heading into a rather tough task against van Gerwen in the final, with the three-time world champion vying to lift his first title since November.

However the 32-year-old held his nerve and remained closely knitted with his Dutch opponent, recording a 97.1 average and pinning five maximums during a monumental victory.

It was Searle who raced out of the gates in his second senior PDC final, quickly forming a 3-0 advantage with two breaks of throw in punishing a wasteful world number one.

Although, Searle subsequently squandered an opportunity at the bull for a 124 checkout, which sparked the revival of a seemingly dead and buried van Gerwen – who reeled off four legs on the bounce to move ahead.

A crucial 78 outshot on tops stopped the rot and levelled Searle up at four-a-piece, only for the Dutchman to find a magnificent 164 checkout with his opponent sat on 82 to regain his lead.

The tables then turned anew with doubling difficulties from van Gerwen enabling Searle to claim the next two legs and move in front once again.

Despite the Devon-based thrower handing van Gerwen the twelfth leg of the clash and surrendering his advantage for a second time in a turbulent tussle for both competitors, he remained on the upper hand.

Van Gerwen’s dissipated attempts at the outer ring continued to prove decisive. A faultless 171 set-up shot from Searle, followed by more misses from his opponent, moved the 32-year-old within one leg of a maiden success.

He then landed a 13-darter, including a 140 and his fifth maximum, to trouser the £10,000 winner’s prize fund, seeing off a total of five Premier League stars en route to victory.

Searle’s campaign began in dramatic fashion as he reeled off five consecutive legs from 4-1 down against Gerwyn Price, before completing comfortable victories over Michael Barnard and Josh Payne – both of who joined Searle in sealing European Tour qualification on Friday evening.

Having recorded 96 averages in his opening three matches, ‘Heavy Metal’ then overcame Michael Smith averaging 97, prior to pinning a composed 68 checkout to defeat three-time BDO world champion Glen Durrant to book his place in the semi-finals.

Searle then clocked his most prolific performance of the day, averaging 101.3 and pinning six maximums during a 7-5 victory over Dutchman Jeffrey de Zwaan to reach the final.

As for van Gerwen, he was left frustrated following a below-par performance in the decider. The world number one laid down a marker in the first round, averaging 107.2 in a 6-1 thrashing of Yordi Meeuwisse, before beating William Borland, Ryan Joyce, Dirk van Duijvenbode and Chris Dobey leading up to a semi-final clash with Peter Wright.

Both Joyce and Dobey proved tricky customers for ‘Mighty Mike’ as he survived scares in both. The former World Championship quarter-finalist, Joyce, spurned multiple match darts against the world number one in the third round, while Dobey relinquished a 5-2 lead in the quarter-finals.

Van Gerwen and Wright locked horns in a World Championship final rematch in the last four, with the Dutchman gaining revenge on his nearest rival, running out a convincing 7-3 victor.

After opening up a 2-0 lead in the tie, Wright was blown away by the Premier League leader – who reeled off six legs on the bounce to move within two legs of the final. A 13-darter from Wright reduced the arrears, only for van Gerwen to prevail utilising double tops.

Elsewhere, Players Championship One winner Gary Anderson departed in the second round at the hands of Wesley Harms, as did the likes of Ian White, James Wade and Scott Mitchell.

Four-time women’s world champion Ashton defeated both Dimitri Van den Bergh and Adam Hunt to embark on her deepest ProTour run since winning through Qualifying School last month. The 49-year-old recorded a 96.1 average in beating the former World Youth champion in the first round.

Both PDC World Championship quarter-finalist Durrant and ProTour quarter-finalist Edgar have clashed on social media in recent months, with Durrant claiming the spoils after completing a rousing comeback from 3-1 behind.

Meanwhile, Mensur Suljovic and Danny Noppert both completed perfection at the Robin Park Leisure Centre. The pair pinned nine-dart finishes during their respective victories over Jeff Smith and Andy Boulton.

A staggering nine perfect legs have now been pinned since the start of the season, including the Challenge Tour and European Tour qualifying events, with the record of 47 in a calendar year being already under threat.

Amazingly still in each PC event in 2020 so far

The Players Championship series resumes on Sunday at the Robin Park Leisure Centre in Wigan as 128 throwers vie for success with £75,000 on offer.