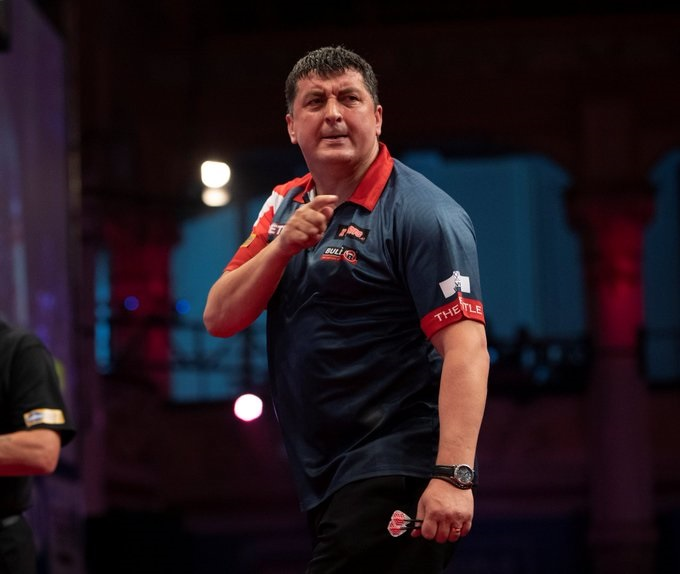 Home hero Mensur Suljović won the first ever Austrian Darts Championship in Schwechat, Vienna with an 8-7 win over Michael van Gerwen in the final.

It’s a 6th PDC title for ‘The Gentle’ and a third on the European Tour, but most importantly he becomes the first Austrian to win a PDC title in Austria, which sent the thousands in attendance at the Multiversum into raptures after a sensational comeback from 6-3 down. There were impressive runs for Cameron Menzies and Mike De Decker, while Rowby-John Rodriguez, Vincent van der Voort and James Wilson secured vital ranking money in their battles to qualify for the major tournaments later this year.

The tournament got underway on Friday afternoon with the first round, and the standout performance came from 17-year-old Adam Gawlas, who only started playing darts six months ago, and managed to beat Ross Smith in a fantastic game. Rusty-Jake Rodriguez and Dietmar Burger delighted to home crowd with progression to the last 32, and Christian Bunse got his first ever win on the European stage against Jermaine Wattimena.

Dimitri Van den Bergh posted a ton-plus average to kick-start the evening session on Friday, with Jeffrey de Zwaan missing double 12 for a nine-darter against Christian Gödl and Kyle Anderson seeing off Stephen Bunting in a high-quality affair. Saturday’s second round saw seven of the sixteen seeds fall, notably Michael Smith’s struggles on the Euro Tour continued with a defeat to Cameron Menzies, Ricky Evans averaged over 100 in beating Kirk Shepherd, and Rowby-John Rodriguez squeezed past Daryl Gurney in a superb contest.

Michael van Gerwen begun his quest for a first European Tour title since ET5 with a comfortable 6-2 success over Kyle Anderson, and carried on where he left off in the last 16, beating countryman Jeffrey de Zwaan 6-3. Menzies and Rowby-John Rodriguez carried on their dream runs, while Vincent van der Voort produced a fantastic display to thrash Gerwyn Price 6-1 and take a huge step towards the European Championship and World Grand Prix.

Van der Voort then made his first PDC semi-final since 2016 by seeing off Menzies 6-4, and Mensur Suljović followed up wins over Adam Gawlas and James Wilson with a 6-4 success against Ian White. Peter Wright won 6-5 for the third game running against Rodriguez, and Van Gerwen thrashed Ricky Evans 6-0 in a little over eight minutes to complete the semi-final line-up.

Suljović averaged almost ten points more than Van der Voort in their last four clash, but ‘The Dutch Destroyer’ managed to hang on in the early stages and found a sublime 150 checkout to peg back to 5-4. However, ‘The Gentle’ got over the line to make it first Euro Tour final in over a year, where he would face Michael van Gerwen after the World Champion denied an excellent display from Peter Wright, squeezing through 7-6 despite averaging significantly less than the Scotsman.

The final saw Van Gerwen storm 2-0 up, but Suljović stayed within touching distance until his scoring deserted him in the ninth leg and Van Gerwen consolidated a break to lead 6-3. ‘Mighty Mike’ then missed four darts to go one away, and that proved to be the turning point as the Austrian number one took the leg and won the next one in 12 darts on the bull.

MVG stopped the rot to lead 7-6, but it was Suljović who ensured Van Gerwen has now lost his last two European Tour finals 8-7 as he fittingly won the title on 70, going treble 14 for double 14. A bumper month of Euro Tour action continues next weekend when the European Darts Matchplay heads to Mannheim, with Krzysztof Ratajski and Glen Durrant both seeded for the first time.

Williams and Ashton triumphant at the BDO World Trophy