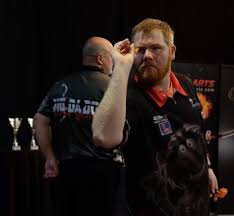 The race for the World Darts Championship is really hotting up across the pond in North America, and Matt Campbell is edging ever-closer to a debut after yet another title, while Jeremiah Millar staked a late claim following his maiden triumph.

After Campbell and Joe Huffman reigned victorious in early June, the Championship Darts Circuit returned. Campbell, who picked up his maiden CDC title last month, lost out in the final of Main Tour Seven as his compatriot, Jeremiah Millar, edged him out with a 6-5 victory in the final.

Millar represented his home country of Canada during last year’s CDC campaign, but opted to wave the flag for the USA this time around.

The Michigan-based thrower began his campaign with successive whitewashes, including a ton-plus average and finished of 117 and 155 against Nick Georgeson, before an accustomed 5-2 win over Jimmy Damore moved him into the quarter-finals.

He then saw off two former World Darts Championship qualifiers in Darin Young and Jim Long to seal his place in the final.

A closely contested final followed with both of the opening legs going with throw, only for Millar to pin double four and gain a slight advantage.

Campbell won the next two to regain his throw and move into a one-leg lead. The next two went with throw once again, with Millar then reeling off the next two legs hitting a 110 outshot to move 5-4 ahead and once away from the winner’s circle.

Ontario-based Campbell sent the match to the distance as he pinned a 14-dart leg. The decider proved apprehensive with just two scores of over the 100 mark being recorded – both coming from Campbell – but Millar held his nerve to claim his maiden title.

After losing out in the final of Event Seven, Campbell went all the way to the title in the following event. He got proceedings underway with three successive 5-1 thrashings of Joel Chmielak, Gino Florian and Timmy Nicoll.

A 6-3 win over an out-of-sorts Chuck Puleo booked the Canadian’s spot in the semi-finals – where he completed a 6-3 win over Jason Brandon, despite averaging below 90.

Ontario’s Campbell then produced his best performance of the day as he averaged a mere 91.7 in beating compatriot, Kiley Edmunds in the final, 6-3.

Elsewhere, former World Championship finalist, Jeff Smith, was denied in the quarter-finals of both events across the weekend, missing out to the losing finalist on both days.

Darin Young continued to push for a World Championship return with runs to the last 16 and last eight; he sits comfortably at the top of the USA ranking table, while Campbell stands tall in the Canadian one.

After reaching the semi-finals of Main Event Seven, Joe Huffman created a gap between himself and Young after a disappointing early exit in the following event. Huffman lost out to Kiley Edmunds – who went on to make the final, and averaged 98.8.

Larry Butler underwent his furthest run since enduring health concerns. ‘The Bald Eagle’ claimed the scalps of Matt Smooke, Danny Pace and Jim Long on his way to the quarter-finals.

The CDC Main Tour returns on September 14 as we find out the duo heading to Alexandra Palace in December.