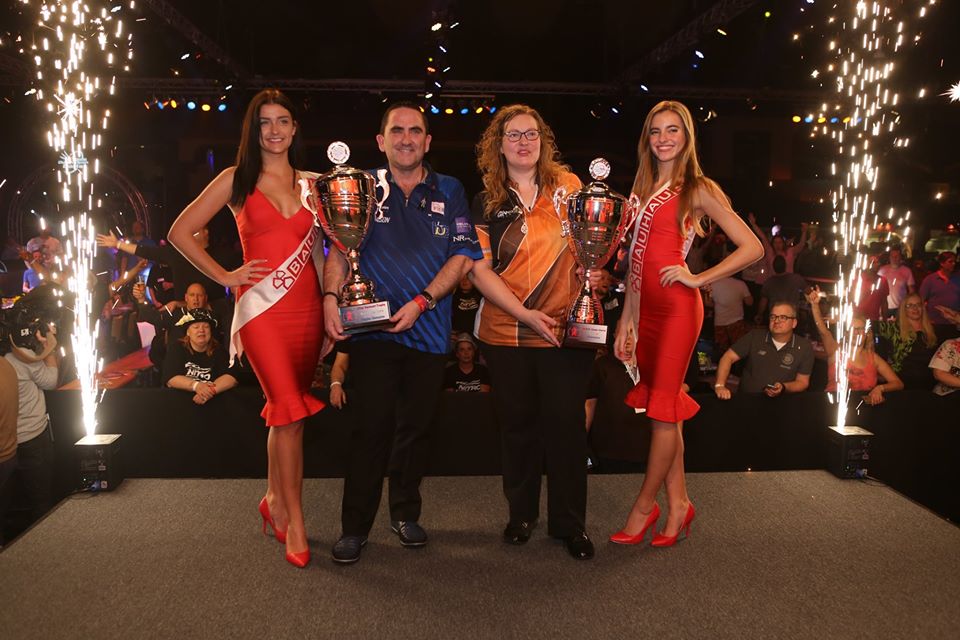 This year’s event was only ranked by the WDF after issues arose between the tournament organisers and the BDO in late 2019, but that didn’t dissuade anyone as more than 3,700 players crammed into the De Bonte Wever for the biggest annual open competitions in the world.

Montgomery picked up his second Dutch Open crown by defeating Belgium’s Brian Raman 3-1 in the final.

‘The Boss’ broke Raman’s throw in the opening leg of the match on route to taking the first set 3-1 and the second set went with throw as the Scot pushed himself into an early 2-0 lead.

An 11-darter set the tone for the Glaswegian to wrap things up in the third set, especially when he followed up that break with a 14-darter. Raman hit back though, holding throw with an 11-darter before breaking back when Montgomery missed five match darts.

Raman wrapped up the third set with an 18-darter but Montgomery didn’t make the same mistakes in the fourth set, winning three legs on the spin to secure the 3-1 victory and the €5,000 top prize. The Scot, who finished with an 87.4 average, is now top of the new WDF rankings and his victory secures him a place at their proposed big event at the end of the year.

Montgomery had been pushed to a last leg decider by young Dutch thrower Levy Frauenfelder earlier in the day but he picked up after that, recording averages of over 90 in victories of Stefan Martena and Aleksey Kadochnikov.

The 2010 Finder Masters took care of Belgian veteran John Desreumaux, who had ensured no Dutch participation in the last eight for the first time in 22 years by defeating Martijn Kleermaker and defending champion Richard Veenstra, in the quarter-finals 5-3.

In the semis, Montgomery ran up against BDO World Champion Wayne Warren. ‘Yank’ took the opening two legs of the first set before Montgomery roared back to win three legs on the spin.

Warren wrapped up the second set with a 98 average but Montgomery took the deciding third set, wrapping it up with a 13-darter.

Raman came through the bottom half of the draw by beating Dutch pair Roemer Mooijman and Arjan Konterman and compatriot Andy Baetens, who he edged out 5-4 in the quarters.

Paul Hogan had got a measure of revenge for his BDO World Championship defeat to Jim Williams in the quarter-finals but ‘Crocodile Dundee’ was on the receiving end in the last four as Raman beat him 2-0 to avenge his loss in the preliminary round at the O2 last month.

Montgomery, who had previously won the Dutch Open in 2014, did the double over the course of the weekend as he picked up with pairs title alongside Martin Adams.

The pair had to win 10 games to even reach the final, edging out the impressive Hogan and Jason Heaver in the semis. In the final they met Ryan de Vreede and Colin Roelofs, the former Youth champion who came in as a late replacement, with the Dutch pair having defeated Gary Stafford and Scott Mitchell in the semis. The British duo came from behind to defeat their younger opponents 5-4 in the final.

Aileen de Graaf had lost in the last two Dutch Open finals but she made amends for that in 2020 as she beat her fellow Dutchwoman Anca Zijlstra 5-2.

Zijlstra, who came into the event on the back of some good darts in Romania last weekend, broke de Graaf’s throw in the opening leg of the final before the 29-year-old won three legs on the spin.

Heerlen’s Zijlstra got back on the board by breaking throw again in the fifth leg but she was powerless in the next two legs as de Graaf wrapped up her third Dutch Open title with back-to-back legs of 20 and 19 darts respectively.

In the absence of defending champion Mikuru Suzuki, de Graaf was one of the favourites for the event and she showed that in the earlier rounds, averaging over 80 in 4-1 wins over Priscilla Steenbergen and Deta Hedman, the latter of which came in the semis.

Zijlstra, the former World Trophy semi-finalist, posted some impressive wins of her own on the way to the final, whitewashing Margaret Sutton and Irina Armstrong and beating Plymouth’s Maria O’Brien 4-1 in the other semi.

Zijlstra also had to settle for second best in the ladies pairs competition as she and her partner Femke Herms were defeated by Lorraine Winstanley and Sutton.

A 114 checkout from Sutton gave the English pair an early 3-0 lead and while the Dutch duo got back on the board by winning the fourth and fifth legs of the match, Winstanley made sure that the title would be going across the water to England by taking out 46 for a 27-darter.

Stijn Verbakel was much more accurate on the outer ring in the under-14 final, averaging 73.9 in a 3-0 win over Italy’s Francesco Basili.

Dutch youth international Lerena Rietbergen entered the winners circle by defeating defending champion Layla Brussel 3-1 in the girls final. Some wayward finishing from both players in the second leg lowered their averages but Rietbergen hit three tons on route to lifting the title.