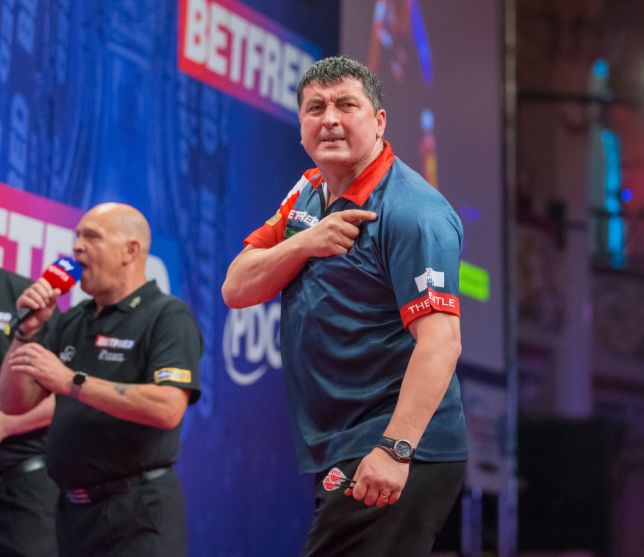 Mensur Suljović won a thrilling final 8-7 for the second time in a few weeks to claim his first ever PDC title on English soil, and just his second Players Championship crown.

It was Michael van Gerwen in Vienna, and it must’ve felt like the world number one again for the Austrian today in Barnsley, as an inspired Ian White averaged 104.4 for the tournament, hit a 9-darter in the final and threw everything at Suljović. Incredibly, White is still yet to win a floor title this year, previously his speciality, despite two finals and several other deep runs leaving him 5th in the Players Championship Order of Merit.

There were plenty of upsets to be had right from the off at Players Championship 26, as Peter Wright, Dave Chisnall and Adrian Lewis were among those beaten in the first round. Particularly notable was a rare win for Jamie Lewis over Michael Smith. Sunday was also the final day of World Grand Prix qualification, and with 30 of the 32 places already wrapped up, it was down to Mervyn King and Dimitri Van den Bergh to try and hold off several challengers and seal their spots in Dublin.

World Matchplay quarter-finalist King recovered from a poor start to see off Reece Robinson in round one, while Van den Bergh eased past Robert Thornton. The Belgian lost out to a resurgent Alan Norris in the next round, however, to leave the door ajar for the likes of José de Sousa, Ron Meulenkamp and Gabriel Clemens. King sealed his spot at the Citywest with a 6-4 win and 105 average against Scott Baker, and produced a similar display in the last 32, only to lose out 6-5 to Steve West.

Nine-dart hero earlier in the day, Rob Cross continued his quest for a first ProTour title of the year with a 6-2 defeat of Keegan Brown in said third round, while Matthew Edgar and Cristo Reyes put together crucial runs for their World Championship hopes. Saturday’s winner Daryl Gurney was beaten comfortably by Gary Anderson, and Kyle McKinstry’s ProTour debut came to an end against James Richardson.

It had been a weekend of high averages in Barnsley, and that showed no signs of relenting in the last 16 as Mensur Suljović produced a huge 112.6 against Glen Durrant and Gary Anderson posted a 108.7 against Richardson. Elsewhere, Gabriel Clemens’ World Grand Prix hopes were ended by Jonny Clayton to seal Dimitri Van den Bergh’s debut in the double-start event.

Ross Smith’s first quarter-final since the UK Open saw the latest in a succession of superb wins for Jonny Clayton, while Ian White registered his third ton-plus average of the day in whitewashing Andy Boulton and Steve West and Mensur Suljović saw off Gary Anderson and Cristo Reyes respectively to book their places in the last four.

White’s highest recorded average in the PDC, a 115, was more than enough to seal more semi-final disappointment for West, and Suljović edged past Clayton 7-5. The final was a superb affair, a prolonged bull-off proving vital, as just a couple of breaks of throw provided a fascinating contest. White’s 9-darter to level up at 5-5 only spurred both players on further, and after Suljović missed a dart at 158 to win it 8-6, the pattern of the match was summed up in the decider as he took out 109 with ‘Diamond’ sitting on 7-5 to claim the Players Championship 26 title.

Another fantastic weekend in Barnsley, but attention now turns to Gibraltar for the JDC’s series of events during the week which precede the Gibraltar Darts Trophy, before the World Grand Prix gets underway in Dublin after two more ProTour events.