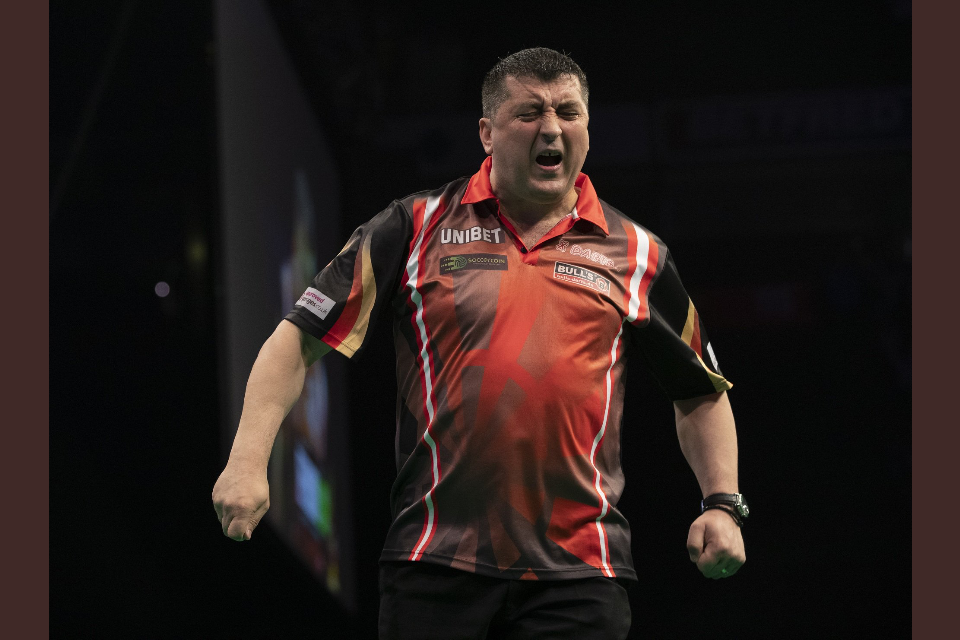 The top eight seeds all safely progressed to the Last 16 as the Austrian Darts Open continued in Graz. Michael van Gerwen, Rob Cross and Ian White were particularly impressive in seeing off tricky opponents, but it was home favourite Mensur Suljovic who stole the show, as he came from behind to defeat Raymond van Barneveld in terrific style.

In his final season in the PDC, Van Barneveld has not been used to crowds cheering against him, but that has not necessarily been the case on the Euro Tour. Last week, Gabriel Clemens had the German faithful on Raymond’s back, and this time out, the Graz crowd were well and truly behind Mensur, who took the lead with a 74 checkout. However, Suljovic had not fully clicked into gear and Van Barneveld reeled off 3 consecutive legs, including a majestic 121 finish. The Austrian got his opportunity on double 14 after an off leg from Barney, and after a 73 finish in the next leg, the crowd had a level game at 3-3 and the momentum with their man. Both players held their throw, before Van Barneveld missed a dart for another 121 checkout to break. Mensur pinned a vital double 18 with his last dart and didn’t look back, throwing 2 180s and checking out 82 on his beloved double 14 for a superb 6-4 win. Suljovic appeared to have a huge weight off his shoulders after the match, as he soaked up all the support he was getting from the crowd. Van Barneveld was classy in defeat but the evening certainly belonged to the Austrian.

Rob Cross came through a dramatic clash with Jeffrey De Zwaan, surviving match darts as the match concluded in a strange deciding leg. De Zwaan, fresh off the back of claiming Players Championship 14 on Wednesday, flew into a 3-1 lead with checkouts of 115 and 121. Cross pegged him back to 4-3 and got the crucial break back with a key 14 dart leg. ’Voltage’ held his throw to take the lead, before missing a match dart at the bull as the World Matchplay semi-finalist sent the game into an 11th leg. After a shaky leg from Cross, Jeffrey squandered three clear darts at double 20, allowing the former world champion to pin double 4 and claim the win. He admitted afterwards he was not at his best, but a win is a win, and ‘Voltage’ is into the Last 16.

Ian White and Peter Wright were made to sweat very head, as they saw off Jamie Hughes and Chris Dobey in deciding legs. White fought back from 3-1 down to see off ‘Yozza’ in dramatic fashion on double 18, in a match that featured 7 180s. Wright was almost made to pay as he squandered a 5-2 lead against the Newcastle man, but came up clutch with a crucial 104 finish in the deciding leg.

Michael van Gerwen was in unstoppable form, as he raced to a 6-0 victory over Steve Lennon, averaging 106 in a comfortable win. The Irish man had no response to Van Gerwen, who pinned 67% of his doubles. Stephen Bunting also claimed a whitewash win, hammering Darren Webster to set up a clash with Van Gerwen, Stephen’s highlight being a superb 114 finish.

Defending champion Jonny Clayton fell at the first hurdle, as Tytus Kanik reeled off 4 consecutive legs to move through to his first ever Last 16 on the Euro Tour, winning out 6-2. In a day where 7 seeds were knocked out, Keegan Brown and Nathan Aspinall impressed to see off Max Hopp and Dave Chisnall 6-4. Mark Webster produced a majestic 11 dart leg in the decider as he saw off his god friend Joe Cullen, who had previously fought back from 5-2 down. Darius Labanauskus had arguably the performance of the day, averaging 102 as he defeated Ricky Evans 6-3, while Steve Beaton put in another outstanding Euro Tour display, seeing off Michael Smith 6-4 in a cracker.

The Austrian Darts Open concludes in Graz tomorrow, and after his dominant win over Steve Lennon, Michael van Gerwen is undoubtedly the clear favourite. However, home town favourite Mensur Suljovic will fancy his chances, as will many others on what is surely set to be another superb day of Euro Tour action.

King at the Double whilst Kokiri claims a crown