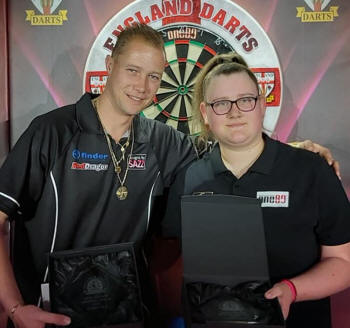 For the second consecutive BDO British double-header, young Beau Greaves was the star of the show in Selsey, winning all of the singles titles available to her over the course of the weekend.

After doing the double in Wales last month, 15-year-old Greaves went into the England Open and National Singles amongst the favourites but no one quite anticipated her sheer dominance of the weekend’s proceedings.

On the Sunday stream, Greaves won all five games she played to take home the England Open and National Singles titles as well as the Girls Youth and Mixed Youth Grand Prix events.

Greaves’ magnificent Sunday began with a mature 4-2 victory over Rhian Griffiths in the National Singles final. Greaves had beaten Fallon Sherrock, Lorraine Winstanley and the dark horse of the weekend Evonne Taylor on route to the final and she had enough to see of the Welsh international Griffiths, who was playing in her fourth BDO ranking final.

Beau N’ Arrow then added to her haul with a commanding 3-0 triumph against Shannon Reeves in the Girls Youth final and by holding her nerve in a nail-biting 5-4 thriller against Leighton Bennett to win the Mixed Youth event. The game with Bennett was one watched keenly by many in attendance and both youngsters were able to demonstrate their prodigious talents in a terrific contest.

In the England Open Greaves had averaged more than 90 in her quarter-final win over Mikuru Suzuki and whilst her averages dipped somewhat on the Sunday, she still had enough to beat Aileen De Graaf and Fallon Sherrock to pick up her fifth career BDO event win. Sherrock had led 4-2 in the final and missed 11 darts to win the match, with Greaves showing maturity and composure beyond her years to take out double 1 and secure a narrow 5-4 win.

Greaves’ masterful efforts over the weekend, which also saw her pick up the prestigious Ladies Pentathlon title and lose in the pairs final, leave her more than £4,000 better off and sitting in a provisional World Championship qualification place.

In the men’s events, it was double heartbreak for the Welshman Wayne Warren, with the 57-year-old losing in both the National Singles and England Open finals.

Warren made the National Singles final by beating the likes of Martijn Kleermaker, Andy Hamilton and Nick Fullwell but he had no answer for Wesley Harms, who averaged more than 98.82 in a highly impressive 6-4 win to secure his fourth title of 2019.

Scott Mitchell had been defending champion in the National Singles but the England captain suffered an early exit, losing in the last 128. The Dorset star fared little better in the England Open, exiting at the last 64 stage.

Much like the proverbial adage about London buses, Warren had gone from waiting more than 9 months to make a BDO ranking final to waiting barely two hours. The former Gold Cup winner impressed in the Category A+ England Open, recording wins over Mick Connerton, Craig Brown, Martijn Kleermaker and Gino Vos on route to the semi-finals. There he met David Evans, the former Challenge Tour event winner making his second semi-final of the weekend, with the Glamorgan thrower having too much for his younger opponent as he powered in a 96 average to prevail 5-1 and set up a meeting with Jim Williams in the final.

Williams had already beaten English, Scottish and Welsh internationals in the shape of Kevin Dowling, Ryan Hogarth and Mark Blandford respectively to make his third semi-final of the year, where he arguably produced his best performance of the weekend. Williams came from 4-3 down to beat Harms, winning the match with a 12-darter.

He carried that form into the final, winning 6-1 against Warren to take home the title, his 11th on the BDO circuit. It was Williams’ first title triumph since his victory in the Northern Ireland Open last October, earning him £5,000 and a move back up to second in the BDO men’s rankings.

For his efforts over the weekend, Warren won £2,800 and he moves up to a career high of 6th in the world rankings, whilst double semi-finalist Evans moves into the top 25 for the first time after his best weekend on the BDO tour to date.

Someone less fortunate in the rankings is Northern Ireland international Kyle McKinstry. ‘The Village Man’ won the England Open in 2018 and reached the National Singles quarter-finals during the same weekend but this year he suffered early exits in both, losing 4-3 to former World Masters quarter-finalist Pip Blackwell in the last 64 of the England Open. As a result, McKinstry drops out of the BDO top 40 and now faces an uphill battle to reach next year’s World Championships.

Also notable during the weekend was the performance of former England international Darren Peetoom. The 2016 Lakeside participant hit a 9-darter in his England Open last 64 tie against East Stirlingshire’s Gary Stone, a game Peetoom would unfortunately go on to lose 4-1.