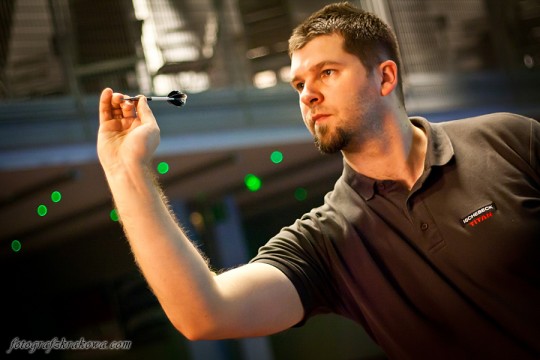 On a weekend of surprising European Tour qualifications in both Slangerup and Budapest, the Hungarian capital saw two more players seal their debuts on the tour as Pál Székely and Krzysztof Kciuk both came through to book their places in Zwolle and Copenhagen respectively.

After Boris Koltsov and Pero Ljubic qualified on Saturday, they returned a day later hoping to add to their tallies, while Pavel Jirkal was looking to find the form that saw him qualify for two of the first four events. However, the other Eastern European qualifier so far in 2019, Karel Sedláček was still nowhere to be seen. There were slightly less entries on Sunday, but it was still a very strong field with plenty of home players entering, although Serbian thrower Oliver Ferenc wasn’t at the venue for the final two qualifiers.

The Dutch Darts Masters is one of the longest running Euro Tour events, and it looked like being a pretty prestigious line-up in the final stages in Budapest. Krzysztof Kciuk was the only notable name to fall in the first round, before Pavel Jirkal and Patrik Kovács lost in the last 16. All four quarter-finals were won by the favourite, so that meant one of Boris Koltsov, Sebastian Steyer, Pál Székely or Tamás Alexits would qualify for Zwolle.

Local star Székely beat Steyer 6-4 in the final to inflict more Polish pain and become the third Hungarian player to appear on the European Tour. The Danish Darts Open was only inaugurated last year, but has quickly become a popular event. Gergely Lakatos and Sebastian Steyer were the most noteworthy players who lost out before the quarter-finals for a place in Copenhagen, and although Patrik Kovács was defeated by his countryman Székely in the quarter-finals, there was still a strong semi-final field.

Krzysztof Kciuk beat Boris Koltsov 6-3 and Pavel Drtil beat Székely 6-1 to set up another Poland v Hungary final, and finally it was the former who came out on top – recent Lakeside participant Kciuk with an average of just below 89 in a 6-3 final victory, denying Drtil’s 100% on doubles. The exclusion of Tour Card holders from these qualifiers was also going to mean plenty of debutantes on the European Tour this year, and it has certainly delivered. Székely and Kciuk added to Jirkal and Ljubic to already have secured debuts from Eastern Europe this year, and not to mention several from the Nordic & Baltic region as well.

It’s only two weeks now until the tour finally gets underway with UK and European Qualifiers for ETs 3-4 in Wigan on Friday afternoon/evening. Pavel Jirkal will represent Eastern Europe in Leverkusen, but we won’t have long to wait to see the likes of Pál Székely and Krzysztof Kciuk make their Euro Tour debuts later in the year.

Meikle and Evetts victorious on day 2 in Wigan