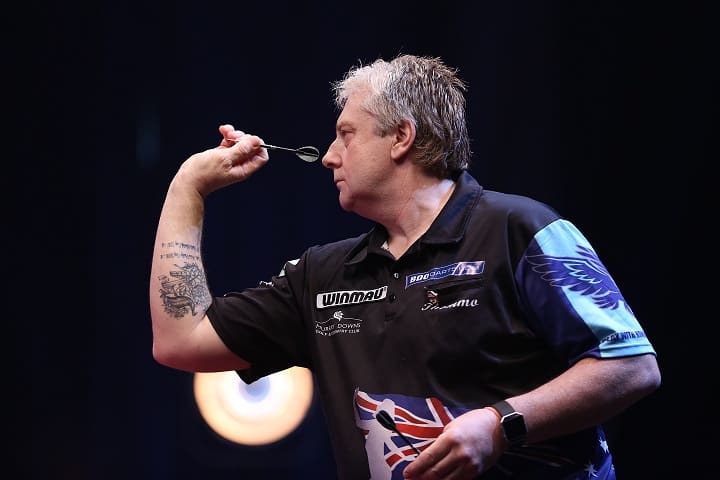 Three-time BDO World Championship participant Thompson lost his opening two group fixtures against Morrison and Mal Cuming but successive wins over Machin, Jeremy Fagg and Stuart Coburn helped him to finish in second place, setting up the semi with Morrison.

An early break of throw put Thompson, who is also currently participating in the Remote Darts League, 2-0 up, before Morrison immediately broke back by taking out 81 on the bullseye. The following five legs all went with throw as both men scored well and found their range on the doubles, Thompson taking out legs in 14 and 13 darts and Morrison hitting a brilliant 106 checkout to level things up at 4-4 and force a decider.

‘Thommo’ had the advantage of throwing first and he made it count, leaving himself on just 98 after 9 darts. The pressure was off the 51-year-old with Morrison back on 300 but Thompson made no mistake, taking it out in three-darts to set up the final with Machin.

Former BDO World Trophy winner Machin, who struggled with internet issues earlier in the competition, lost 5-2 to table-topper Mal Cuming in the final night of the group stage and it looked as though a similar result was on the cards as the Victorian raced into an early 4-1 lead.

However, just as Cuming had been caught cold from behind against Morrison on night four, Machin rallied back and won the next four legs on the spin to book his spot in the final, sealing the deal by taking out 56 with ‘The Bull’ sat on 36.

A break of throw in the opening leg and solid 17-darter in the second leg helped Thompson once again start strongly, only for Machin to edge a scrappy third leg before taking out 120 to break back in leg four. From there it once again went with throw, with Machin holding throw and forcing a deciding leg after Thompson had missed a match dart at tops to take it 5-3.

In a leg befitting the occasion, both men produced some electric darts to determine whether the title would be going to Victoria or South Australia. After fairly non-descript visits of 42 and 30, it kicked up a gear, with Machin pinning scores of 95, 180 and 134 to leave himself on 50 after 12 darts. Thompson, meanwhile, had hit his second maximum of the game and a 140 to leave himself a possible but tricky 151 checkout.

The WDF World Cup winner held his nerve, scoring 111 with his first two darts to give himself another shot at tops and another match dart. This time he made no mistake, taking it out to make it 5-4 and win the title.

Modus Icons of Darts: Adams rolls back the years denying Nicholson in decider