THE BEST OF KYLE ANDERSON 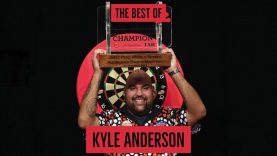 Join us over on Reddit!! To play tournaments and keep up on all darts news

Darts websites and companies I buy from: