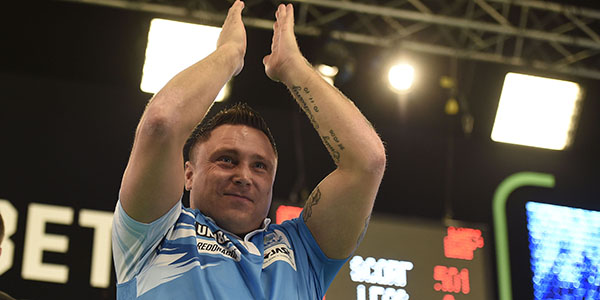 Gerwyn Price won his fifth PDC title at Players Championship 5 in Barnsley following a set of stunning displays throughout the day, which culminated with an 8-4 success over Gabriel Clemens in the final.

It was another high-quality ProTour event as two more nine-darters flew in and plenty of ton-plus averages were thrown, five of them from deserving champion Price. With Michael van Gerwen taking a rest and Gary Anderson still struggling with back problems, the tournament represent a chance for a new PDC winner in 2019, with Dave Chisnall and Glen Durrant the only previous champions in the field. There was also the opportunity for some players to add to their tally of titles, while some harboured hopes of joining the winners’ circle for the first time.

There were few shocks in the opening round at Barnsley Metrodome as Darren Webster was the only top-16 seed to fall in the last 128, losing out 6-4 to Keegan Brown. Of those elite, Ian White, Gerwyn Price, James Wade and Peter Wright all averaged more than 100, while Michael Smith whitewashed Dave Prins and Dave Chisnall and Rob Cross scraped through. A few lower seeds were knocked out at the first hurdle, namely Stephen Bunting, Steve West, James Wilson, Jeffrey de Zwaan and Mickey Mansell.

Darius Labanauskas, Ted Evetts, Kyle Anderson and Steve Beaton also threw ton-plus averages in the first round, while big names Glen Durrant and Raymond van Barneveld progressed comfortably. The highest average in the last 64 came courtesy of Jamie Hughes, who dismantled two-time World Champion Adrian Lewis 6-1 with a 106.3. Michael Smith, Peter Wright and Daryl Gurney were all well below their best in round two and all lost out to unseeded players in Devon Petersen, Ted Evetts and Kirk Shepherd respectively.

Steve Beaton knocked out Raymond van Barneveld 6-3, while Rob Cross, Mensur Suljović, Jonny Clayton and Ricky Evans and produced impressive performances in their progressions to the last 32 stage. The high standard continued into the third round, and we had our first nine-darter of the day, albeit not on the streaming boards. ‘The Mod’ Scott Baker went 180, 180, 141 to lead Dave Chisnall 3-2, but ‘Chizzy’ somehow managed to come back and win 6-3 with an 11-darter, a 12-darter and two 15-darters despite Baker finishing with an average of 110!

The highest seed to fall in the third round was Mervyn King after he lost a deciding leg to an in-form Glen Durrant. Jonny Clayton, James Wade and Max Hopp all continued their surges as did high seeds Rob Cross, Mensur Suljović and Ian White. Not for the first time this year, the last 16 line-up was pretty stacked despite two of the world’s top four players not being present in Barnsley. Arguably Ross Smith was the most least known player in round four, but ‘Smudger’ has been slowly climbing the rankings and played on TV several times at the end of 2018.

The Kent man lost out 6-4 to Gabriel Clemens, while the huge averages kept coming at the Metrodome. Dave Chisnall, Gerwyn Price, Danny Noppert and Ian White all topped the ton mark, as did two losers – Max Hopp and Glen Durrant. The Middlesbrough man’s strange run of either losing in the first round at Players Championships or going to the final came to an end with another solid day, while Rob Cross, Joe Cullen, Jonny Clayton and Mensur Suljović were all sent out in the last 16.

The quarter-finals saw quite a lop-sided draw as some of the higher-ranked players in the bottom half going out had led to a line-up of Gabriel Clemens v John Henderson and Ryan Searle v Danny Noppert. Only one PDC title between those players meant there was a great chance for one of them to get to a final and open their account, or add to their tally in the case of ‘Noppie’. The top half was a different story, however, as multiple PDC champions Ian White, Gerwyn Price, James Wade and Dave Chisnall went head-to-head.

The pick of the quarter-final matches was by far Price-White as they found two 12-darters apiece and only one leg over 15 darts to end with 105+ averages each. It was the top seed White who fell by the wayside, though, Price finding the doubles at the crucial moments to book his place in the last four. Elsewhere, Gabriel Clemens came from 3-1 down to beat John Henderson 6-4, Danny Noppert denied a 98.2 average from Ryan Searle, and Dave Chisnall beat James Wade 6-3.

‘The Iceman’ was continuing his fine start to the season after an unbeaten opening three Premier League outings and several solid runs on the ProTour, most notably to the semi-finals at Players Championship 4. He went one better this weekend, though, in a topsy-turvy encounter with Dave Chisnall. ‘Chizzy’ came from 2-0 down to lead 4-2 early on, before Price reeled off five consecutive legs, three in 15 darts and two in 12 darts to win 7-4 and move through to another PDC final.

The real story of the last four came in the bottom half of the draw however as Danny Noppert nailed the nine in his meeting with Gabriel Clemens. An indifferent start to the year for the Dutchman was ended in style at PC5 as 180, 180, 141 saw him lead ‘The German Giant’ 3-1. However, Clemens came storming back with a similar ending to Price, winning the last three legs to clinch a 7-5 victory and a second PDC final.

Gerwyn Price had averaged in excess of 100 for his three games running up to the final, and he carried on in that vein against a man who hadn’t done so at all, his best display back in the first round against Nathan Derry. It was a welcome return to form for the German, though, as he had only won £500 prior to this weekend in Barnsley. He qualified for the second European Tour event in style late on Friday night, and reproduced that form early on in the piece, pinning a 14-darter to lead Price.

The Grand Slam champion had other ideas, though, and won the next four legs in 39 darts to surge ahead. Clemens took a scrappy sixth leg before Price won the next two to go within two of a first floor title since 2016. Although the German took the next two legs, Price wasn’t fazed and hit 180s in both of the last two legs to help him on his way to two 12-darters, which rounded off an 8-4 win for ‘The Iceman’, a fifth PDC title and another fantastic day of darts.

That £10,000 see Price move up to 4th on the ProTour Order of Merit, meaning he’ll be seeded third for Players Championship 6 on Sunday. Clemens rises to 12th on the fledgling Players Championship Order of Merit while Price sits in 3rd. There’s sure to be plenty more ranking movement tomorrow as 128 players, including the returning Simon Whitlock look to put on another show for us. Could we see another first-time winner in 2019?