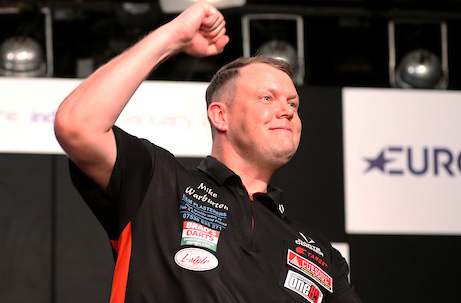 It was a three way tie at the top of day four of the second stage of Modus Darts’ Icons of Darts league.

Warburton produced some scintillating arrows during day 4, having beaten Nijman with a 106 average with his Dutch opponent averaging nearly 113 and a 167 outshot, but not being enough in a 4-3 reverse.

The Welshman began the days action with a 4-1 victory over Scott Mitchell before further wins against Mark Webster, Jason Askew and Aaron Monk – with Warburton surviving match darts in the latter.

His only defeat came to the hands of Andy Jenkins who shared top spot with him on day 4 with the Welshman missing double 12 for a match winning 144 outshot.

Nijman has been a revelation so far during the home darts process and he continued his superb run of late by staying joint top of the group by also winning five of his six games.

Aside from his defeat to Warburton he beat Scott Mitchell and Jason Askew in a last leg shootout, before taking down Andy Jenkins and Mark Webster 4-2 whilst he whitewashed Aaron Monk 4-0 in his last game of the day.

Rocky was cruising past the first few games of the day with victories over Mark Webster, the aforementioned Warburton, Scott Mitchell and Jason Askew.

His only defeat came to the hands of Wessel Nijman with a 84 average in a 4-2 reverse before winning his final match of the day against Aaron Monk.

Elsewhere, Aaron Monk and Scott Mitchell finished mid table with two wins apiece ahead of Jason Askew and Mark Webster down the bottom of the league having massed a solitary win on day 4.