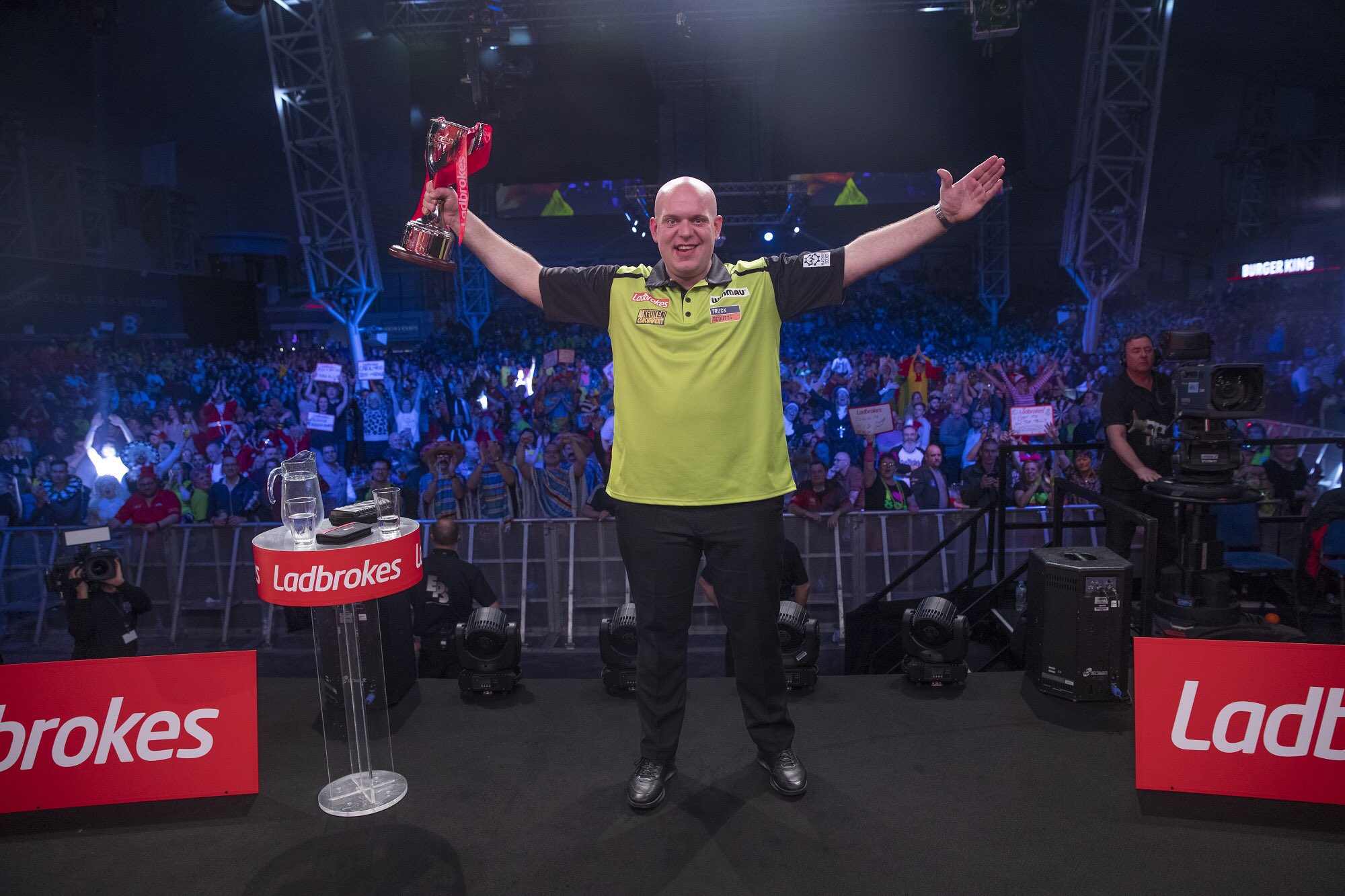 The world number one brought to an end his three-month title drought, with his last triumph fittingly coming on the very same stage at the Players Championship Finals in November – where he likewise defeated Price.

That was never in doubt, was it! pic.twitter.com/q1f6C0yekO

Van Gerwen lifted the magnificent ‘FA Cup of Darts’ trophy just half-an-hour after completing the nine-darter in his emphatic 11-3 semi-final victory over Daryl Gurney. The 30-year-old achieved the feat following Jonny Clayton’s piece of brilliance earlier on in the tournament.

Van Gerwen recorded a breathtaking 110.32 average in thrashing Gurney in the semi-finals, in the wake of producing similar numbers in a rampant performance against former world champion Rob Cross in Sunday afternoon’s quarter-finals.

Nathan Aspinall, James Wade and Jason Lowe were saw off by the three-time world champion beforehand, with West Midlands builder Lowe coming the closest to toppling the world number one in a last leg decider on Saturday afternoon.

’Mighty Mike’ opened proceedings with a maximum and mesmerising 13-dart leg in the latest instalment of his and Price’s box office rivalry, only for the Welshman to gain a significant advantage as his precision on tops became apparent with checkouts of 97 and 105 helping him form a 5-1 lead.

Van Gerwen then gained a foothold, jumping all over missed opportunities from the back-to-back Grand Slam of Darts champion, and winning three of the next four legs to move within one.

Troubles on the outer ring continued to prove costly for Price. After some scintillating treble hitting and cover shooting when needed in pinning a 13-darter, Price failed to capitalise on squandered doubles from van Gerwen, allowing the Dutchman to snatch the next two legs and level proceedings at seven-a-piece.

Van Gerwen then reeled off the succeeding three legs, pinning two maximums, and there was thereupon seemingly no way back for a distraught world number three.

However, the tables appeared to be turning marginally once again. Impressive finishes of 80 and 94 from Price moved him within one of a deciding leg, though, a subsequent wired bullseye was the Welshman’s last act of the match, allowing van Gerwen to pin 66 to seal the deal.

VAN GERWEN DOES IT AGAIN!!!

What a truly incredible final! pic.twitter.com/GGCfJvLC3o

“It’s an incredible win and it means a lot to me to win this tournament,” van Gerwen told ITV Sport following his triumph. “I’ve had a phenomenal tournament and the pressure was on me.

“It was a hard day for me, I had to play three Premier League players and it was not easy, but I played really good darts and didn’t do a lot wrong.

“The nine-darter was fantastic, but with the way I was playing it was just a matter of time. That’s just one leg though and I had to keep my focus.

“Gerwyn had his chances in the final, but I took good advantage and never missed a chance. That was important, so I can only be happy with this.”

A stunning weekend for the world number one! pic.twitter.com/rZ9ShHuLth

Price was defeated in his second UK Open final three years after losing out to an emotional Peter Wright – who lifted his maiden major crown in spite of the absence of van Gerwen through injury problems.

Price had beforehand beaten a valiant Dimitri Van den Bergh in the quarter-finals, averaging over 102, following wins over Gabriel Clemens, Ricky Evans and Danny Noppert earlier in the weekend.

Elsewhere, Daryl Gurney booked his place in the semi-finals with a narrow 10-9 victory over Jelle Klaasen, with the Dutchman faltering late on after leading 6-4 in a closely contested affair.

Eight missed match darts from Jamie Hughes and Jonny Clayton survives to book his place in the Semi-Finals!#UKOpen pic.twitter.com/wwiZzCMKU3

Jamie Hughes squandered a handful of match darts as he battled back from four legs behind against Wales’ Clayton, before falling short in a deciding leg.

Hughes was appearing in his maiden PDC major quarter-final, with the experience of the former Austrian Darts Open winner proving essential as he reached his third televised quarter-final in Minehead.