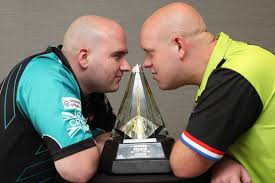 The Unibet Premier League hits the Principality this week, with the Welsh capital city of Cardiff, and the Motorpoint Arena hosting the action. The race for the finals night at the O2 Arena in London is hotting up, with several key clashes taking place.

I actually correctly picked the outcomes of all four games (for a change!) last week, as well as two correct scores, so here’s hoping for more of the same this week!

Only leg difference separates James Wade in third place, and Daryl Gurney in sixth, as the gridlock in the race for the final four intensifies. Two men in that cluster of players meet in Cardiff, with a massive two points at stake. Mensur Suljovic and Daryl Gurney will be looking to solidify their claims to punch their ticket to London next month in the opening match of the evening.Premier League Week 11

Suljovic suffered a second straight defeat in another disappointing outing in Liverpool last week. The standard was low quality at best as Gerwyn Price, with a modest 89.24 averaged bested the Austrian’s 88.8 to win 8-5.

Gurney on the other hand averaged 104.05 in his match, some near fourteen points ahead of his opponent, James Wade, but it was only good enough for a share of the spoils, as the ever dependable Wade nailed over 53% of his doubles.

Suljovic opted to rest rather than play the two Players Championship events in Barnsley last weekend.

Gurney went to the last 16 of PC11, ousted 6-5 by Steve West, but Sunday saw Ron Meulenkamp knock the Irishman out in round one by a 6-3 margin.

Prediction: If Gurney can negate Suljovic and his methodical approach, he can grind out an 8-6 win.

Two players nearly assured of a berth in London in May clash in match two, and it’s a real mouth waterer. Rob Cross and Michael van Gerwen have a five and four point buffer over the chasing pack respectively, but this will still be a keenly fought contest, with MVG obviously not content with being second in the table.

Cross kept up his good form in the league in Liverpool with an 8-5 win against Peter Wright. It was arguably match of the night, with both men averaging over 100, as well as being sharp on the doubles. Cross took out key finishes a key times, with a 140 checkout the highlight, along with over 50% success on the doubles.

van Gerwen was at his ruthless best to demolish Michael Smith 8-3. An average well over 109, along with in excess of 60% on his doubles was more than enough for the Dutchman to pick up maximum points.

Both Cross and van Gerwen were absent in Yorkshire last weekend, opting to focus on their clash here instead.

Prediction: This is a tough one to call, with Cross’ scoring and finishing being so strong of late. If the van Gerwen of last week arrives in Cardiff, he wins. I think it will be a give and take game, with MVG taking the reins towards the conclusion for an 8-5 win.

Michael Smith drinks firmly in the last chance saloon this week, as he must surely win every remaining game in order to have any chance of qualification. Gerwyn Price will look to maintain his position in a congested table.

Smith was bulldozed in Liverpool by Michael van Gerwen, who capitalised on every small Smith mistake to run out an 8-3 winner, despite the St Helens thrower averaging over 100.

Price was very workmanlike, as he laboured to two points with a low key, but vital, 8-5 win over fellow play-off contender, Mensur Suljovic.

Smith enjoyed a confidence boosting final and semi-final placings in PC’s 11 and 12 in Barnsley. Both times he ran into eventual winner, James Wade, but will take heart from his performances over the weekend.

Price crashed out in round one on Saturday in Barnsley, losing 6-3 in a battle of the muscles with Arron Monk. Danny Noppert knocked Price out of Sunday’s event, with a narrow 6-5 win.

Prediction: This is a game that should flow due to the two’s throwing styles. I think both Smith and Price will cancel each other out, and I predict a 7-7 draw as the outcome in this one.

Another man in dire need for maximum points is Peter Wright. The Scot showed encouraging signs in Liverpool last week, but ultimately came up empty handed. He faces another tough task this week, as he takes on the circuits current man of the moment, James Wade. Wade has captured three Titles in a month, and will be hungry for more Success in Wales.

Despite his best efforts, Wright couldn’t stop Rob Cross from taking an 8-5 win. Although Wright averaged over 100, he was powerless to stop “Voltage” from taking the two points with some punishing scoring and finishing.

Wade snatched a point from Daryl Gurney in Liverpool, proving that averages aren’t everything. His 90.17 average was enough to hang with the 104.15 of “Superchin” to take a point.

Wright had a decent run to the last 16 of PC11, where Michael Smith accounted for him 6-5. Dirk van Duijvenbode knocked “Snakebite” out of PC12 at the last 64 stage.

Wade arrives in Wales in superb form, possibly the form of his life. He doubled up in Barnsley by scooping both Titles on offer last weekend. Saturday saw him defeat Michael Smith 8-6 in a re run of last month’s PC9 final. Wade had to overcome Smith again on Sunday, this time at the semi-final stage, as he took the PC12 Title with an 8-5 win against emerging Dutch star, Jeffrey de Zwaan.

Prediction: Time is fast running out for Wright to make a dash for the play-offs, and I expect a James Wade in remarkable form lately to take an 8-5 win in this one.