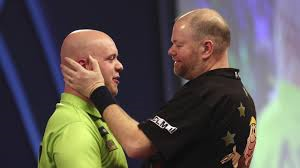 Judgement Night is upon us at the AHOY Arena in Rotterdam, but it’s proved to be an anti-climax. The competition lost Gary Anderson from the start, and with only one relegation place to decide this season, Raymond van Barneveld has filled this spot with a 7-1 thrashing at the hands of Daryl Gurney last night.

Attention now shifts to the battle to make the play offs, with the last few rounds of matches producing some unpredictable results. With the threat of immediate elimination now over for the time being, the league should start to take some shape. All eight remaining players are strongly in contention with a shout of making the O2 Arena showpiece in May.

Suljovic picked up two points from an improbable position, roaring back from a 5-1 deficit, to defeat Rob Cross 7-5.

Both are steady, rhythmical players, and the styles should gel. The two have come into good form, so the logical choice is a 6-6 draw.

Both these players have been off the boil in the league in the last few weeks.

Wright was never in the contest against Michael van Gerwen last night. He just about saved the embarrassment of a whitewash against the World Champion, but a 7-1 defeat was heavy enough.

Price was involved in a see-saw battle with Michael Smith, and would have been gutted to see “Bully Boy” take out 90 on the bull to win 7-5. This made it three losses on the spin for the Welshman.

This could be another back and forth game for Price, and I can’t split the two. A 6-6 draw for me.

Jeffrey de Zwaan is the last of the “contenders” in the 2019 Premier League. The Dutchman attempts to become the first of this group to register a win, as he takes on Rob Cross in match three.

Cross will still be reeling from last night’s loss to Mensur Suljovic. Quite how he relinquished a 5-1 lead is a mystery, and he will be keen to put this right on night two in the Dutch Port.

de Zwaan is a heavy scorer, and can string legs together effortlessly at times. Cross is usually consistent enough, and if he can stem the early tide, I feel he can hold on for a 7-5 win.

James Wade is unbeaten in four, but has three draws in those recent games. He will look to return to the winners enclosure tonight, with Michael Smith the opposition in Holland.

Wade overcame another “draftgate” in securing a draw with the talented Belgian, Dimitri van den Berg last night, and will look to kick on 24 hours later.

Smith grabbed a vital win against Gerwen Price to avoid elimination last night. The St Helens man scored and finished a lot better than in recent weeks, and this will encourage him going forward.

I favour Wade’s consistency on the doubles to overcome Smith 7-5 in this one.

Raymond van Barneveld bows out of the Premier League in front of an adoring home crowd in the final match of the evening, with the toughest match possible ahead of him.

His heavy 7-1 loss to Daryl Gurney, coupled with Michael Smith picking up two points last night, saw elimination confirmed for the much loved Dutchman. It was sad to see the five times World Champion struggle against Gurney, and he never threatened to get anything from the contest.

By contrast, van Gerwen ruthlessly thumped Peter Wright 7-1, having missed a dart at double 12 for a whitewash. MVG looked in ominous form, and back to somewhere near his best following a few below par weeks in the league.

This doesn’t bode well for van Barneveld in Rotterdam, and I see van Gerwen not getting caught up in the emotion, and out to secure a big win. I think a 7-2 van Gerwen win is on the cards.