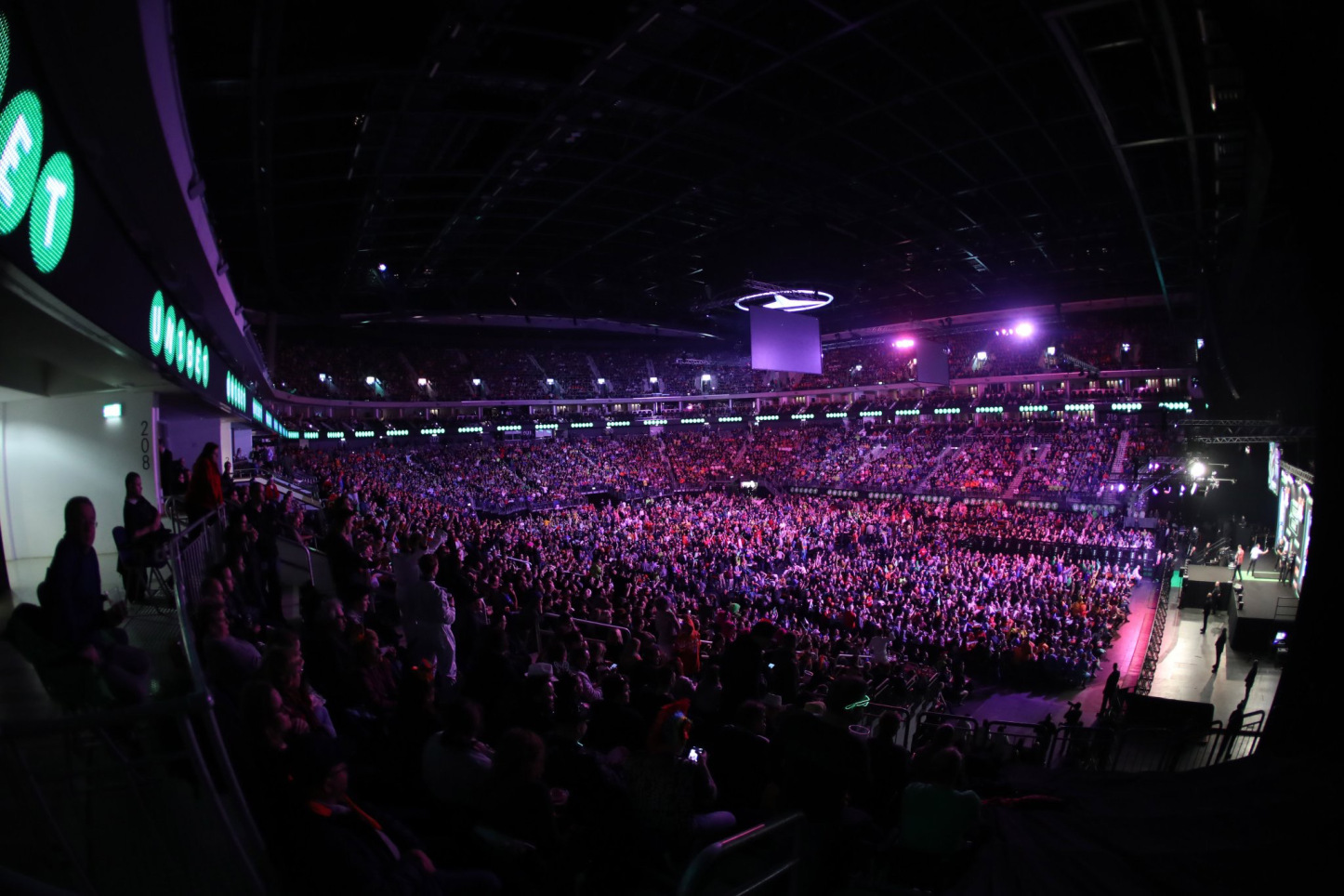 Unibet Premier League Night Four: History Made in Berlin as 12,000 Pack Inside the Mercedes-Benz Arena

History was made on night four of the Unibet Premier League – 12,000 packed inside the Mercedes-Benz Arena in Berlin as the Premier League of Darts made an appearance in Germany for the very first time.

Michael Smith topped the table after week four after he continued he perfect start to the Unibet Premier League campaign. The St Helens-based star is yet to lose a game after returning to Premier League action after two years away.

‘Bully Boy’ saw off a sub-standard Simon Whitlock in Berlin and the former World Youth Champion still believes he can top the table after judgement night and maybe go on to lift the Premier League title.

Whitlock took the opening leg in Germany but Smith pushed on as he won the next four legs in 14, 15, 17 and 18 darts. The comeback seemed to be on as ‘The Wizard’ pinned double 5 to bring the gap back to 4-3 but Smith won the next three legs to claim his fourth successive Premier League victory despite averaging just 87.32.

Peter Wright and Gary Anderson both bounced back after defeats in Newcastle as they produced a stunning match, which ended in a 6-6 draw. Anderson took an early 2-0 lead with a 150 checkout, ‘Snakebite’ levelled up the match with a 76 checkout before turning the game around with an 80 checkout to lead 3-2. The next two legs went with throw before Wright converted an 81 checkout to lead 5-3. Wright then guaranteed a point with a Shanghai 120 outshot but ‘The Flying Scotsman’ swooped as he won the next three legs to snatch a point – hitting the bullseye to close out the game.

Rob Cross grabbed a second win in the Unibet Premier League as he saw off Raymond Van Barneveld 7-3 in Berlin. Cross, who had stared the Premier League with two defeats, picked up his first points last week in Newcastle when he defeated Peter Wright and doubled his tally in Berlin against the five-time World Champion. The pair were locked at 3-3 going in to the seventh leg, with the Dutchman taking out 112 in the sixth to level the score before Cross went on to take control of the match. An out of sorts Van Barneveld missed seven of his ten attempts at a double and made a mid-game change of darts, and was punished as the World Champion won the final four legs without reply, sealing the win with a 128 checkout.

Michael Van Gerwen produced another brilliant display – continuing his outstanding form to start of the year. Van Gerwen averaged 103 in a 7-2 victory over Daryl Gurney hitting 41% of his attempts at double.

‘Mighty Mike’ went 2-0 up before Gurney snatched a leg. From there it was plain sailing for the Dutchman as he won four straight legs before Gurney claimed his second and final leg in Germany. Van Gerwen hit a superb 106 checkout on the way to a 6-2 lead before hitting a 25 outshot to close out the 7-2 victory over ‘Superchin’.

Mensur Suljovic ended his run of three straight Premier League defeats over Michael Smith, Simon Whitlock and Raymond Van Barneveld as he overcame winless Gerwyn Price 7-3 in front of a immense crowd in Berlin. The Austrian ace averaged 106.53 and hit 60% of his attempts at doubles. Suljovic raced in to a 5-1 lead and Price, who has struggled to find his form so far in this year’s event, couldn’t cope with his Premier League opponent. Suljovic eventually sealed a 7-3 victory and spoke of his delight after the match.