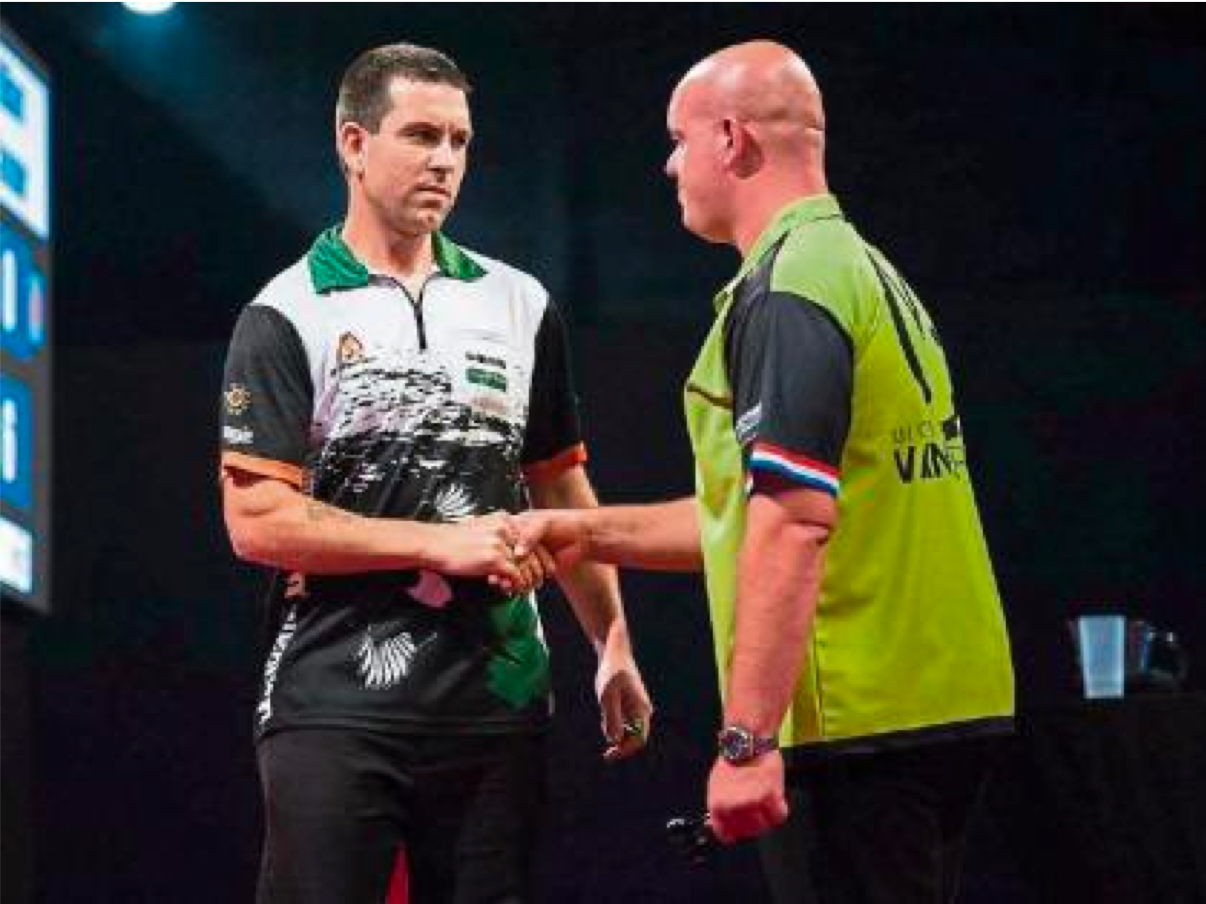 William O’Connor will enter the lions den when the Premier League makes its way to Dublin for night four of the 16 week marathon.

Van Gerwen will be looking to recover from his defeat to Nathan Aspinall last time out and will expect a partizan atmosphere hoping for the same fate.

Aspinall himself will open up the evenings action as he takes on league leader Glen Durrant, who’s enjoyed a stellar start to Premier League life.

Whilst there’s also a rematch from the controversial World Championship semi final between Gerwyn Price and Peter Wright to end the night.

Glen Durrant’s win over Gary Anderson last week sent out a statement of intent to the field that he wasn’t picked for the nine to make up the numbers.

In fact the numbers look quite good for Duzza at the moment, top of the table with one of two unblemished records left in the competition whilst also up to his highest PDC ranking.

But as his walk on song goes he knows he will have to Pump it Up to get victory over Aspinall.

The Asp himself is flying off the back of victory against Van Gerwen in Cardiff last time out.

The 101 average was impressive enough without mentioning his seven from 13 checkout ratio.

Those numbers you feel will need to be similar for both men to combat each other, both in form, both feeling confident – this opener really could be the best watch of all.

Despite sitting seventh in the table, Rob Cross has experienced the in depth quality of this year’s Premier League lineup in the first three weeks.

A draw, win and defeat to Gerwyn Price, Nathan Aspinall and Glen Durrant respectively, Cross will be looking to push his way back up the right end of the table against Anderson.

The Flying Scotsman tried to fight back against a rampant Durrant last time out, but was unable to catch the Teesider in time to lose 7-4.

But what can be said is Anderson looks as if he is getting himself back to his best after a wretched 12 month spell with a bad back.

As the weeks continue to pass, the arm looks as if it is flowing better and averages are moving up to that baseline of 100.

Daryl Gurney is still looking for his first win as finds himself rooted to the bottom of the Premier League table ahead of his clash with Michael Smith.

Gurney has had to play two of the top three in the World rankings in Michael Van Gerwen and Gerwyn Price in his matches, but at this stage points are golden for him to ensure he can keep his neck above water coming into the Rotterdam double.

Smith sits at the top of that cluster of players on three points, and in turn finds himself in the play off spots.

For Bully Boy being top of that area he knows to break through that barrier higher up the table nothing less than maximum points would do.

William O’Connor gets his chance to take to the Premier League stage when he takes on Michael Van Gerwen in the challenger match for week four.

Last year, Van Gerwen had to contend with a big crowd against him in Aberdeen on that famous homecoming night for John Henderson.

O’Connor will be hoping that the partizan atmosphere at the 3Arena will help him to become the first challenger to win a match in the two years of the system taking place.

The Magpie will use this as a chance to relax and enjoy the occasion.

As for the World Number 1, he’ll want to instantly get back to winning ways after last weeks defeat to Nathan Aspinall.

Having failed to have won any ranking titles in the first two months of the year, he will want to prove a point to some doubters.

However, he came agonisingly close to winning that title in Wigan on Sunday, only for an untouchable Gerwyn Price to stop him from lifting the title.

The tastiest meeting of the evening is the last one where the world number 2 and 3 go head to head in a repeat of last years World Championship semi final.

The pair clashed during that game following the end of the second set, but time is a healer and both have kissed, made up, and are still friends.

The tag of World Champion either inspires or intimidates, and for Wright he has embraced that tag by following the World final triumph he has added the Masters title and pro tour titles to his ever growing CV.

Price has drawn each of his first three games in the Premier League and will be looking to get that seemingly illusive first win sooner rather than later as he finds himself in the weird position of looking both above and behind his shoulder.

The difference will be on the doubles, with both heavy hitters. Wright’s 140 hitting will be his scoring base layer whilst Price likes to hammer home the maximums.