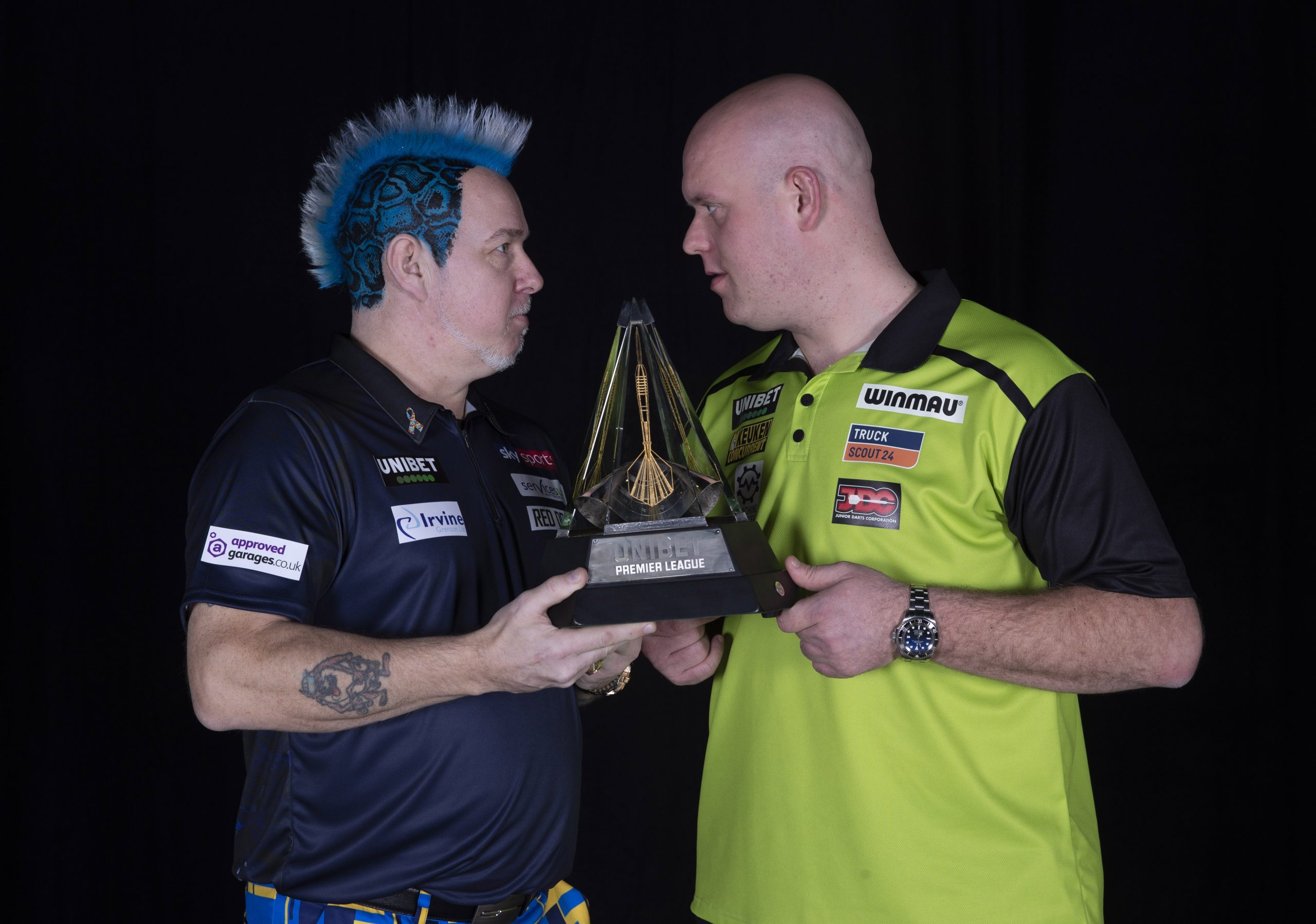 Peter Wright returns to his native Scotland as the Unibet Premier League gets underway on Thursday evening, with the newly-crowned world champion facing Michael van Gerwen in a rematch of the New Year’s Day final.

Nine of the world’s elite will spend their next 16 weeks on the road as the Premier League extravaganza returns. They will be joined by an additional selection of Challengers, with John Henderson being handed the baton on the opening night.

Henderson returns to Aberdeen after sending the AECC crowd into overdrive 12 months ago. This year sees a change in location for the Scotsman as the newly-manufactured P&J Live venue debuts.

Points won by Henderson and the other eight Challengers will not count towards the league standings, however, their opponents will retain any points gained from the matches. Challengers will instead receive financial bonuses for winning or drawing their match.

Thursday’s opening evening of action will commence at 7pm, with darts returning to Sky Sports Darts for the first time since Wright’s victorious World Championship campaign.

Here's the Teessider on his favourite #Boro moment… #UTB pic.twitter.com/Ux4vfFyfbl

As reporters gathered from all over the world in Milton Keynes last week for the Premier League’s Media Day unveiling, the vast majority of those speaking to the press had taken time out of their practice ahead of the Ladbrokes Masters.

However, Glen Durrant had made the roughly three-hour long journey from his residence in Middlesborough to the Buckinghamshire town especially for the unveiling, having not qualified for the Masters.

‘Duzza’ was awarded with a Unibet Premier League place after reaching four major quarter-finals during his debut year as a professional, as well as being crowned the Newcomer of the Year as part of the 2019 PDC Awards.

Also during his maiden season on the professional circuit, Durrant was left feeling disrespected by Michael Smith – his Thursday evening opponent – following the pair’s meeting at the World Matchplay in July.

Smith voiced his views on Durrant via Live Darts following the Winter Gardens tussle, stating that the Middlesborough man “can’t just come over [from the BDO] and think that the world’s his oyster”. Durrant subsequently demanded respect from the recent Masters finalist.

The 49-year-old former BDO number one was defeated by Smith in the World Matchplay semi-finals, as part of five meetings between the two last year with three of those going the way of the St Helens man.

Durrant overcame the 29-year-old en route to lifting his second PDC title in May of last year, and in the quarter-finals of the Grand Slam of Darts in Wolverhampton.

The three-time world champion will be making his full Premier League debut, despite featuring as a contender last year, with Smith making his fourth appearance, having made the final two years ago.

‘Make or break’ was how Gary Anderson alluded to this year’s Premier League prior to it commencing. ‘The Flying Scotsman’ was forced to withdraw last time around due to an ongoing back problem, though, he returns and is raring to get back on track.

His Masters exploits provided some much-needed encouragement, in which he defeated both Ian White and Gerwyn Price with ton-plus averages, before being ousted in the semi-finals at the hands of the eventual champion, Peter Wright.

As for Gurney, he wasn’t anticipating the New Year’s Day phone call. He was thoroughly expecting Dave Chisnall to get the nod in replace of him, though, fortune went the way of the Northern Irishman – who features in the the 17-week extravaganza for the third successive year.

The 33-year-old was a Premier League semi-finalist in May as well as also doing so at the World Matchplay and the European Championship, but it was still considered a rather turbulent year for him, having endured early exits in several televised events.

Gurney has never beaten Anderson as part of the whole Premier League spectacle, however, he has won six of their nine meetings in front of the television cameras.

Despite holding a valuable record over his Scottish opponent, ‘Superchin’ will be needing to deal with a hostile Aberdeen crowd – who will without a doubt be firmly behind their countryman.

Peter Wright was left bemused and bewildered at the back of the stage three years ago as he squandered six match darts, handing Michael van Gerwen a third Premier League title on a plate.

He’s still the world number two and the closest challenger to the ‘Green Machine’, but he’s come on leaps and bounds since that very moment. He’s now a world champion. He’s now a man vacuuming up titles for fun.

Van Gerwen was defeated in the first round, and played far from his brilliant best in a 10-6 loss to Jonny Clayton, though, an acclimatisation period is needed for the Dutchman following his world final defeat, in order to adjust to a new set of darts after changing manufacturer.

An incredible final and one of the most deserving winners of a world title!

It's also a fittingly historic end to the tournament as Peter Wright becomes the oldest ever first-time winner of the title aged 49! The best things come to those who wait… pic.twitter.com/pOc9Syz4Ju

‘Mighty Mike’ has met ‘Snakebite’ a staggering 77 times on the professional scene, with 59 of those going the way of the three-time champion of the world.

Wright holds the slender advantage based on current form, having won the World Championship and the Masters within the last few weeks. Could the Aberdeen crowd also play a potentially vital role?

Each week we're going to bring you a classic Premier League match from all 16 venues.

Be prepared for anything from a tartan-dressed bagpiper to intense, extortionate amounts of noise at P&J Live as John Henderson takes to the stage.

The man from Huntley, located just under an hour away from the newly-built Aberdeen arena, will be vying to emulate if not better his 2019 exploits – which saw him produce an inspired comeback against the world number one to draw in front of his Scottish faithful.

We spoke to John Henderson on the eve of his return to Aberdeen as a 2020 @Unibet Premier League Challenger at the @PandJLive Arena pic.twitter.com/gXXKDZ3BVv

Henderson has been far from successful since that Thursday evening, but form will certainly go out of the window with the crowd firmly behind him from the get-go.

Nathan Aspinall would not have experienced anything to the degree of which comes his way on Thursday evening. A chorus of booing will be hurled his way, with the support towards ‘Big Hendo’ being extremely hard to deal with.

‘The Asp’ debuts full-time in the Premier League after producing a remarkable rise through the echelons of the PDC and climbing into the world’s top eight.

Aspinall was one of the four competitors pictured on the Media Day with a piece of silverware in front of them, heading into the Premier League as the reigning UK Open champion.

He is without a doubt the better player of the two, but Henderson knows exactly how to throw a dart. If his rocking motion is in full swing with the crowd on his side, could he prove a tricky customer for Aspinall?

Sheer brilliance from Cross who is crowned the 2019 @Unibet European Championship winner after a 11-6 victory over Gerwyn Price in the final! pic.twitter.com/WdaBlkMHuU

A fourth successive disappointing major campaign at December’s World Darts Championship sparked change in Rob Cross’ approach. He has this week spoken straightforwardly concerning his weight loss since his second round defeat to Kim Huybrechts at Alexandra Palace.

Arguably his most successful stomping ground had become a disaster for ‘Voltage’ as he was whitewashed at his first hurdle.

Another early exit at the Masters led to further problems for the former world champion, and he comes into his third Premier League campaign as one of the more troubled competitors.

Price, on the other hand, is one of the front runners. I, for one, didn’t expect to be saying that two years ago. ‘The Iceman’ was eliminated from the Premier League after a torrid debut season in 2018, stating that he hated the aspects that the extravaganza contained.

Since then, he’s become one of the world’s elite. A back-to-back Grand Slam of Darts champion, vying to build up an ever-growing honours list, amid remaining to ‘steal money from the professionals pockets’ as he says so himself.

Price has never beaten Cross in the Premier League, and was defeated by the Hastings man in their last meeting in the final of the European Championship in October.

Currently, taking into account form and recent results, there is only one winner and he resides from the Welsh valleys.