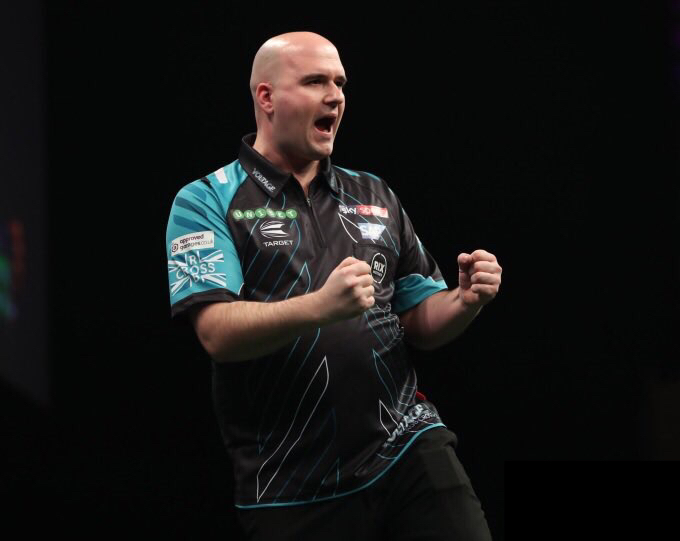 Unibet Premier League Night Three: Cross is Off The Mark!

World Champion Rob Cross got his first win in the Unibet Premier League while Gary Anderson and Michael Van Gerwen produced a thriller in Newcastle.

Champion of the World Rob Cross claimed his first win in the Unibet Premier League after a 7-4 victory over UK Open winner Peter Wright. Cross was back to his best at the weekend in Wigan reaching two Semi-Finals and one Final in a fantastic consistent performance throughout the weekend and continued that form into tonight’s match on the big stage.

Cross went into an early 3-0 lead going out in 15, 15 and 14 darts before Wright produced a slight comeback bringing the scoreline back to 3-2. The next two legs went with throw before ‘Voltage’ reeled off the next two legs to guarantee a draw, Wright kept the game alive with a checkout of 101 but it was too little too late for ‘Snakebite’ as Cross snatched the win by hitting double 16. Cross averaged 98 in his 7-4 victory and Wright wasn’t too happy with something after the match.

Two former Premier League champions produced a thriller – Michael Van Gerwen snatched a 7-3 victory against Gary Anderson with both players averaging over 110. Van Gerwen won the first two legs before Anderson claimed the next two with finishes of 78 and 82. ‘Mighty Mike’ missed the treble 19 for the nine-darter in the next leg and was punished by Gary Anderson with the biggest of them all – the 170. The ‘Green Machine’ then reeled off the next five legs to win one of the greatest Premier League encounters of all time.

Michael Smith continued his invincible start to the Premier League campaign with a 7-2 trashing of Mensur Suljovic. Smith backed up his wins over Gary Anderson and Daryl Gurney with a 94.9 average and a win over Mensur Suljovic to go top of the Premier League after three weeks. There were no maximums in the match but ‘Bully Boy’ did convert a 116 checkout in the fifth leg.

Gerwyn Price celebrated a 6-6 draw with World Grand Prix winner Daryl Gurney after coming back from 5-1 behind. Both players were far from their best and Gerwyn Price is lucky to have got a point out of the game but the 136 and 148 checkouts from the Welshman were world class.

Simon Whitlock continued his perfect start to this year’s Premier League campaign with a 7-4 win over five-time World Champion Raymond Van Barneveld. Truly outstanding darts from ‘The Wizard’ and he has definitely silenced the haters who said he shouldn’t have been chosen for the unique league phase. Whitlock was 58% on the doubles and finished the game with an average of just over 94.

The Unibet Premier League will return next Thursday and history will be made as the competition moves to Berlin and Germany for the very first time.

Simon Whitlock produces another magic act to top the table after week three while the World Champ is off the mark!#Unibet180 #PLDarts #Darts #PDC pic.twitter.com/wd4pkk3Ysn

Meeting Ted McMillan From Winmau And Darts Scotland | What A Blast

I Was Blown Away After Visiting Darts n Arts In Scotland