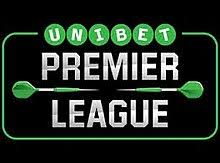 After sixteen weeks of gruelling action, featuring contenders, retirements, reversals of retirements, and bust ups a plenty, we finally reach the season ending playoffs in the Unibet Premier League.

The fabulous O2 Arena in London is the setting for the remaining four players to battle it out for the prestigious trophy, along with a cool £200,000 first prize.

Table topper, Michael van Gerwen faces off against his nemesis in the league this year, Daryl Gurney in the first semi-final. Rob Cross and James Wade play a re-run of their meeting last week in Leeds for the other place in the final.

Here, I try and plot the outcome of the three matches.

The first semi-final sees Michael van Gerwen start as warm favourite. This is despite Daryl Gurney holding a played two, won two record against the green machine in the 2019 Premier League.

It was back to Players Championship duty last weekend in Barnsley.

van Gerwen met current BDO World Champion, Glen Durrant, in the semi-finals of PC15. It was their first ever meeting in the PDC, but it was the Teesider that won the battle, hammering the Dutchman 7-2 on the way to winning the event. MVG couldn’t make further progress in PC15, when a resurgent Robert Thornton saw him off 6-4 in the last 16.

Gurney chose to rest up ahead of a potential long and draining night in London.

Prediction: In his two victories in the Premier League over van Gerwen this season, Gurney hasn’t had to break the 100 average barrier, with MVG uncharacteristically averaging low for his standards both times. Gurney will hope to make an early dent in the Dutchman, and will need to up his average slightly in order to make it a hat trick of win over the World Champion.

Van Gerwen will be up for this, and will be in no mood to be defeated again. I think he can hit the front, and hold on for a 10-7 win.

You don’t have to go too far into the memory banks for the last time Rob Cross and James Wade met in competition play. It was last week in Leeds, in which both men knew that they had made the O2.

Rob Cross was absent from the weekends action in Barnsley.

Wade exited at the last 64 stage at PC15, beaten 6-2 by Kyle Anderson. He then decided against entering PC16, instead choosing to focus on the play offs.

Prediction: Last weeks’ meeting was pretty much a dead rubber, with both men knowing they would be facing each other in London. This should be a repeat of their first meeting rather than the last. I lean towards Wade in a tight contest, to score heavy, and finish at crucial times. I’m picking “The Machine” to hang on for a 10-9 victory.

Presuming MVG and Wade make the final, although Wade also has a decent 2019 record against van Gerwen, the Ducthman comes alive when the big prize is on the line.

I expect Wade to push van Gerwen close, but ultimately the man in neon green and black should be able to fend off what has been an excellent season for the Aldershot ace.