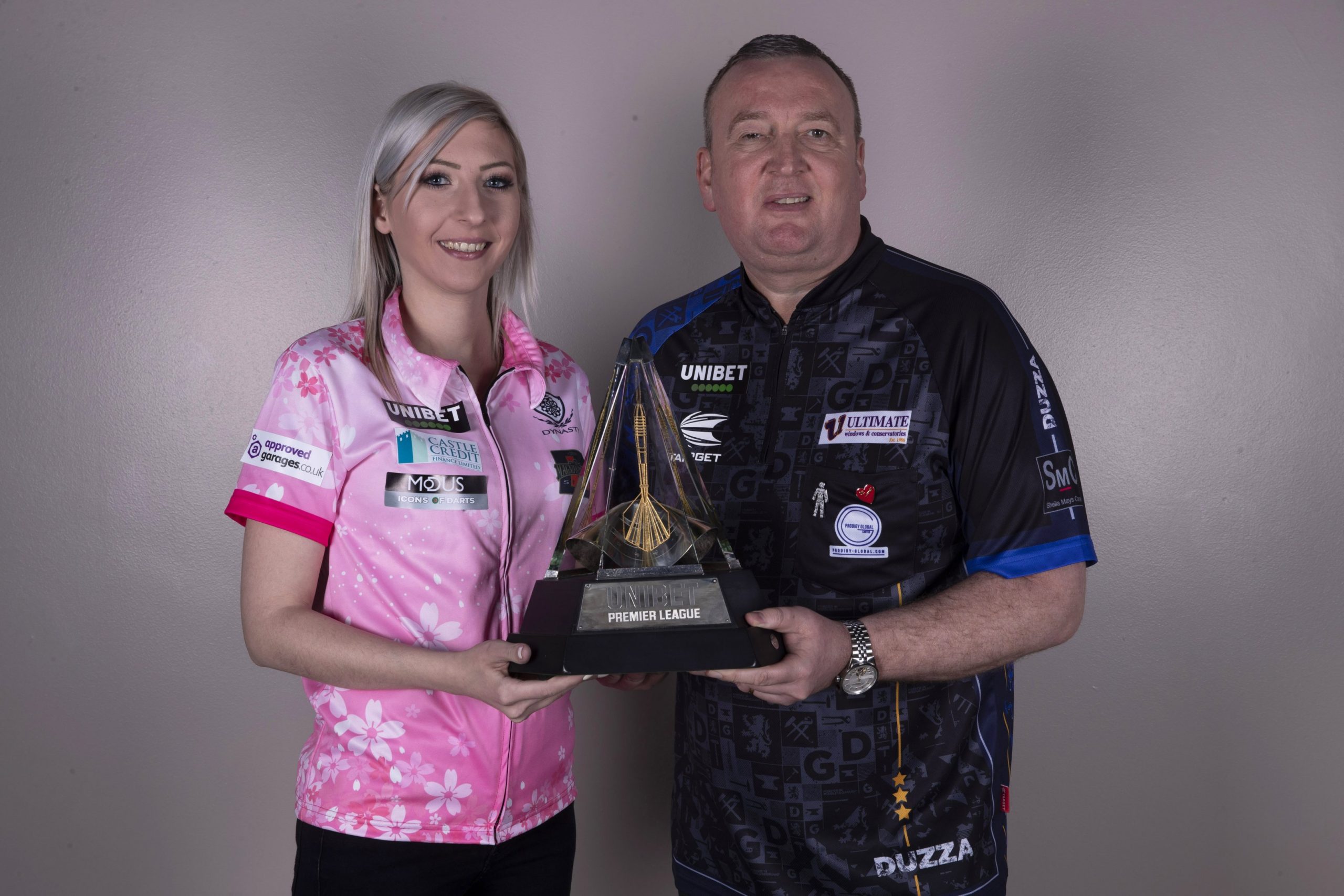 Fallon Sherrock’s mesmerising story resumes on Thursday evening in Nottingham as she faces Glen Durrant, becoming the first female thrower to play in the tournament, while Peter Wright and Gary Anderson collide.

Sherrock will be bidding to become the first challenger to ever win a match, following John Henderson’s being defeated on Night One in Aberdeen, as she takes on the three-time world champion at the Motorpoint Arena.

Points won by Sherrock and the other eight Challengers will not count towards the league standings, however, their opponents will obtain any point gained from the matches. Challengers will instead receive financial bonuses for winning or drawing their match.

Elsewhere, Rob Cross and Gerwyn Price will be hoping to put their Week One woes behind them. Cross faces the reigning UK Open champion Nathan Aspinall, while Price takes on former Premier League finalist Michael Smith.

Thursday’s evening of action will commence at 7pm, with history being made once again and Sherrock pinning her hopes on creating more.

Having previously appeared as a Premier League contender last year, Nathan Aspinall begun his debut Premier League season with a victory over John Henderson in front of an hostile Scottish crowd in Aberdeen.

It was a far from convincing showing from ‘The Asp’ last Thursday night, although his sequence of showings on Sunday as well as a blistering 117.5 average in seeing off Peter Wright speaks volumes regarding his current form.

Aspinall takes on a struggling Rob Cross, and despite having lost three of his five matches against the former world champion, he defeated defeated him on his way to winning both the UK Open and US Darts Masters.

Cross was held to a 6-6 draw at the hands of Gerwyn Price on Week One, having led 6-4 in a closely contested affair.

Both Gerwyn Price and Michael Smith commenced their 2020 Premier League campaigns in a fashion that would not have hoped for. The Welshman scrapped a point against Rob Cross, while Smith was defeated by debutant Glen Durrant.

The amount of one-point matches accumulated by reigning Grand Slam of Darts champion Price last term led to him narrowly missing out on the London play-offs.

Price was fortunate to receive a point last week against the current World Matchplay champion, while Smith’s doubling proved costly once again with Durrant coming out victorious in an emphatic 7-3 win.

‘Bully Boy’ holds the advantage against Price, having not only won 14 of their 23 previous meetings, but also won two of their three clashes as part of the Premier League phase.

Smith and ‘The Iceman’ locked horns as recent as Sunday afternoon, with Price running out victorious on that particular occasion. The Welsh former rugby professional will be vying for a similar outcome in Nottingham.

Both Peter Wright and Gary Anderson are firing on all cylinders at present. Wright has lifted both the World Championship and the Masters since the turn of the year, whilst his Scottish World Cup of Darts teammate claimed Players Championship One on Saturday.

Anderson recorded an extraordinary tournament average of 101.85 as he returned to form at the Barnsley Metrodome, comfortably overcoming Canada’s Jeff Smith in the final.

Wright will be vying to return to winnings ways in the Premier League. The champion of the world’s unbeaten run was scuppered by Michael van Gerwen on Night One, with the 49-year-old looking to put things right in the Premier League after a disappointing campaign last term.

As for ‘The Flying Scotsman’, he has seemingly rediscovered not only his form but also his sheer passion for the sport. He produced what was needed to see off Daryl Gurney last Thursday.

Fallon Sherrock returns to the limelight after becoming a global sensation overnight during the World Darts Championship at Alexandra Palace.

Sherrock captured the hearts of the world in beating both Ted Evetts and Mensur Suljovic, becoming the first woman to win a match at Alexandra Palace.

Having stood on the winner’s podium many times alongside Glen Durrant within the BDO system, Sherrock will face the three-time world champion for the first time.

The Isle of Man Open, England Matchplay and the prestigious BDO World Trophy have been lifted in coinciding fashion by both Sherrock and ‘Duzza’.

Durrant began his debut Premier League campaign in victorious style, thrashing Michael Smith 7-3 with an average of just over the 95 mark, while Sherrock will be vying to carve a slice of history once again as she lines up alongside the world’s elite.

Sherrock’s doubling is was reminiscent to that of Durrant at Alexandra Palace, and she’ll be needing to pounce on every chance provided by Middlesborough’s Durrant in Nottingham.

Questions were answered by Michael van Gerwen last week as he defeated the newly-crowned world champion Peter Wright to get off to the best possible start.

Many had doubted the world number one heading into the 16-week Premier League extravaganza, thanks to his decision to change manufacturer and therefore make amendments to his old faithful equipment.

Van Gerwen averaged 104 in seeing off Wright last Thursday, and his Week Two opponent Daryl Gurney is the man he defeated in the semi-finals of last year’s tournament.

Gurney’s most memorable victory over the three-time world champion arrived at Butlin’s Minehead Resort in 2018. The Northern Irishman ousted the world number one to lift his second major title at the Players Championship Finals.

Despite managing to overcome a rather hostile crowd last week, Gurney was defeated by Anderson with the crowd booing every attempt at double earned by the former World Grand Prix champion.