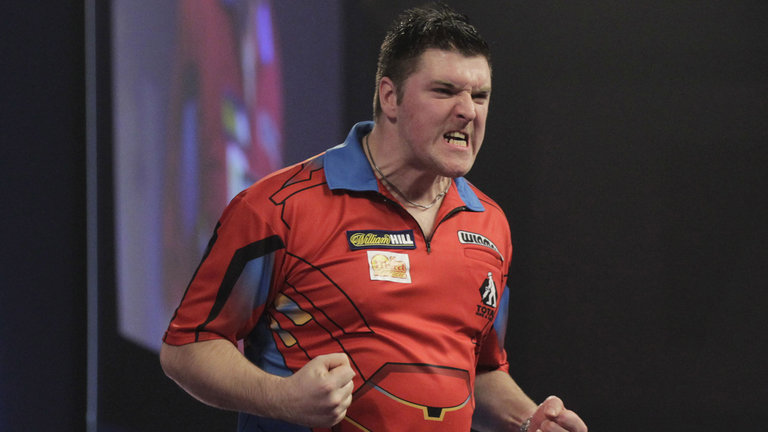 With the threat of relegation banished, and the “Contenders” done for 2019 at least, concentration shifts to the race for the play offs in the Unibet Premier League.

Raymond van Barneveld was the man eliminated from the competition, with two thumping defeats to Daryl Gurney and Michael van Gerwen sending him packing from the tournament, and then announcing and reversing his immediate retirement.

The SSE Arena in Belfast is the venue for this weeks’ action as the format also increases to a best of 14 legs. This should determine the cream of the crop, with some tasty matches ahead of us in Northern Ireland. Here are this weeks’ fixtures.

The show opener is Austria v England, as “The Gentle” and “The Machine” go head to head.

A win for Wade could send him top, or at least a share of it, while victory for Suljovic could see him leapfrog the Aldershot thrower.

Both players were not in danger of relegation in Rotterdam last week. Suljovic was disappointing after his resurgent come from behind win over Rob Cross the previous night. He was comfortably beaten 7-3 by Daryl Gurney in Holland.

Wade was impressive in a high quality 7-4 win against Michael Smith last week. A 102.44 average, and over 60% on his doubles, saw Wade maintain his lofty position in the table

Suljovic’s campaign in Hildesheim came to an end at the opening hurdle, as eventual runner up, Ricky Evans beat him 6-4.

Wade hit a magical nine darter in his last 16 tie with Darren Webster in Germany, although it didn’t prevent him slipping to a last leg defeat.

Prediction: Wade to edge this one 8-6 for me. His scoring has rapidly improved, and, along with his always steady doubling, he should be able to stay on top of Mensur to take the two points.

Defeat for either Michael Smith or Peter Wright in Belfast could really cut them adrift of the play off chasing pack. Both have been inconsistent of late, with right in particular showing an alarming dip in form in the league.

Michael Smith couldn’t hang on to James Wade’s coat tails in Holland last week, despite a near 100 average and over 40% on the doubles. He was defeated 7-4.

Wright again looked off colour in a 7-5 loss to Gerwyn Price. Despite a 160 finish, the Scot averaged a mere 87.6 in a disappointing display.

Smith gave the event in Germany last weekend a miss, while Wright had a confidence boosting run to the quarter finals, eventually losing 6-2 to a resurgent Adrian Lewis.

Prediction: Wright has been off colour for some weeks now, and Smith is showing glimpses of form, along with being well rested. I fancy “Bully Boy” to come through 8-5.

A tough one to call is match three of the evening. Rob Cross has been in explosive form at times in 2019, while Daryl Gurney has come into a real purple patch, culminating in his triumph in Hildesheim last weekend, and plays in front of an adoring home crowd.

Cross took on the last of the “Contenders” in Jeffrey de Zwaan in Holland last week. In front of a pro Dutch crowd, Cross found himself 3-1 down, before a vital 3 checkout with his last dart, with de Zwaan sitting on 32 kick started a comeback. He won the next four legs, and closed out a 7-4 win.

Gurney took maximum points over the two days in Holland, and was steady enough, hitting a barrage of 180’s in a 7-3 win against Mensur Suljovic.

Cross edges past Ron Meulenkamp, before falling 6-2 at the hands of his opponent this week.

Gurney won the tournament in Hildesheim, with impressive wins over Andy Boulton, Cross, Stephen Bunting and Adrian Lewis, before beating Ricky Evans 8-6 in the final.

Prediction: This one is close to call. Although Gurney won handily in Germany, this is a different day, and I just can’t separate the two. a 7-7 draw is my pick.

Another two patchy players meet in the final match of the night. Michael van Gerwen has been in and out of form this year so far, while Gerwyn Price has seen a promising start to the year stall somewhat over the last few weeks.

van Gerwen was given the tough task of finally finishing his friend and compatriot, Raymond van Barneveld’s Premier League Career. It was a sad night on many counts, but MVG didn’t let sentiment get in the way too much, handing out a 7-1 hammering to his fellow Dutchman.

Price was back to winning ways in Holland, with a low quality 7-5 win against the struggling Peter Wright.

van Gerwen was warmly fancied to get back into the winners enclosure in Germany last weekend. The plan was derailed though by Keegan Brown, who ousted MVG 6-4 in the last 32.

Price was also a victim of Brown, but at the quarter final stage by 6 legs to 5.

Prediction: van Gerwen has shown pieces of his best in the last few outings in the league, hammering Peter Wright and van Barneveld on consecutive nights last week. I favour him to make it seventeen straight wins against the Welshman, by an 8-4 scoreline.