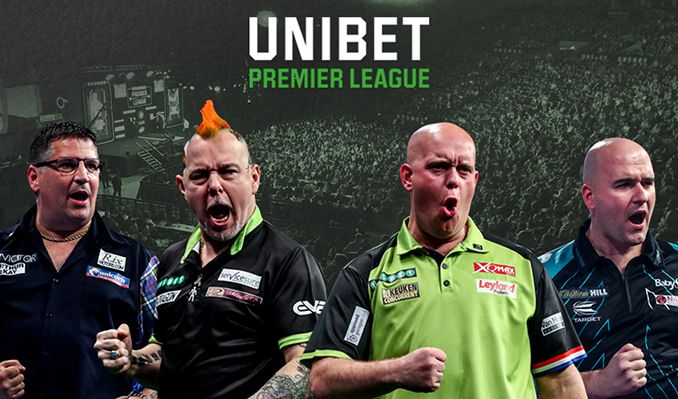 The Premier League heads south this week, as the event reaches its smallest venue of the season. The Westpoint Arena, Exeter is the home of the week 4 action, as the league starts to take shape. This is a traditional fixture in the calendar, as this affords closeness for the nearby Ladbrokes.com UK Open, which gets underway in Minehead on Friday. Here is my preview.

The action kicks off between a man in red hot form, and a recent World Championship quarter finalist. Welshman Gerwyn Price is on the crest of a wave at the moment, and will have a lot of momentum going into his match with the latest of the contenders in Luke Humphries.

Price was involved in a high quality encounter with James Wade, roaring back from a 5-2 score line to reel off four straight legs. A draw was fair due to the nature of the contest though, and Wade claimed the final leg for a draw.

It was a flawless weekend on the floor for “The Iceman” as he did the double in Barnsley. Averaging 100+ no less than ten times during the course of the two days play.

He wrapped up PC5 on Saturday with an 8-4 win over Gabriel Clemens, and repeated the trick in Sundays tournament, beating the gallant Ricky Evans by the same score line. He completed the job with a magical 170 finish.

It was back to back first round exits for Humphries in Yorkshire. Jose de Souza beat the Newbury thrower 6-4 on Saturday, and Daryl Gurney eased past him 6-2 in Sunday’s event

Prediction: If Price can carry his impressive form on, he wins this handily. 7-3 Price for me.

Match two sees Daryl Gurney, who has made a solid start to his second Premier League campaign, up against Rob Cross, who is still battling for his best form.

Gurney continued his good form with an authoritative 7-5 win against Michael Smith, taking out a big 140 checkout along the way.

Cross was well below par in Dublin, and did well to avoid a whitewash defeat, in a disappointing 7-2 reverse against Michael van Gerwen.

At PC5, Gurney exited in round two, a 6-3 loss to Kirk Shepherd accounting for him. He went one stage further on Sunday, before eventual finalist, Ricky Evans edged him out 6-5.

Cross had a decent last 16 run on Saturday, where Dave Chisnall ousted him in a deciding leg. Krzysztof Ratajski defeated the Hastings man 6-2 in the last 32 of PC6.

Prediction: a 6-6 draw, with Cross’ power scoring being cancelled out by the Irishman’s tidy finishing.

Match three sees Mensur Suljovic, a man desperate for points following a disappointing start to the season, against Peter “Snakebite” Wright, who is currently unbeaten.

Mensur will be bitterly disappointed in only gaining a point from his encounter with Raymond van Barneveld. A 5-1 lead evaporated, and the big Austrian was forced to settle for a point.

Wright found it tough in the early going against “Contender” Steve Lennon in Dublin, finding himself 3-0 down to the inspired Carlow man. Missed Lennon doubles proved crucial though, allowing Wright to claim an important 7-5 win to remain unbeaten.

It was a strong last 16 showing in PC5 for the Austrian, but he met an on form Danny Noppert, who ran out a 6-3 victor. Suljovic was to suffer a shock 6-4 defeat to Maik Kuivenhoven in Sunday’s event.

Wright endured a poor weekend in Barnsley. A round one exit at the hands of Benito van de Pas (6-4) was backed up by a second round 6-5 defeat to Ted Evetts.

Michael van Gerwen continues his march towards yet another TV Title, as he meets the ever consistent Aldershot southpaw, James Wade.

Van Gerwen threatened a whitewash in his encounter with Rob Cross in Ireland last week, surging into a 5-0 lead. In the end settled for a 7-2 demolition of the 2018 World Champion to make it three from three in the early going of the competition.

Wade was again his workmanlike self, but will be disappointed to not have gone home with maximum points from The Emerald Isle. He took a 5-2 lead against the Welshman, only to lose four straight legs, securing the deciding leg, with a brilliant 129 finish, for a share of the spoils.

Van Gerwen swerved Barnsley for last weekend’s events, presumably with the busy UK Open upcoming, an event he crashed out in last year, being a primary focus.

Wade bypassed PC6, after banking a quarter final berth in PC5. He lost out 6-3 to Dave Chisnall.

Prediction: A routine 7-4 win for the Dutchman. Wade can push him close though if he can score, and be ruthless on his doubles.

Raymond van Barneveld’s farewell tour hits the West country this week, and he might just find the perfect opponent to kick-start his season. A factor that could change the dynamic in this match is Smith’s health. He had to have an abscess removed from his groin earlier this week, and it’s unclear if this will affect his performance in any way.

Smith held a 2-0 lead against Daryl Gurney in Dublin, but from there on was always playing catch up once Gurney established a lead. Smith slipped to the bottom of the table with a 7-5 defeat.

van Barneveld snatched another unlikely draw in front of another adoring audience in Dublin last week. Trailing 5-1, and looking down and out, he again slowly clawed back the deficit, and snatched a point with a nerveless 96 checkout on double 9.

Smith didn’t fare well in Barnsley, only winning one match, but was hampered with his medical issue. A last 64, 6-3 defeat to Devon Peterson was followed by a first round exit at the hands of Ron Meulenkamp by 6 legs to 4 on Sunday.

It was another fruitless weekend on tour for “Barney”. He crashed out 6-2 in round one on Saturday to Countryman, Jermaine Wattimena, and picked up a win over Matt Clark on Sunday, before falling to Steve Beaton in a 6-3 reverse on Sunday.

Predicton: If Barney can find his scoring to go with his impressive clutch doubling the last few weeks, he can edge a 7-5 win against an off colour Smith.

Is the Magic of the UK Open Dead?

Rob Collins: ‘I’m not there to make the numbers up’