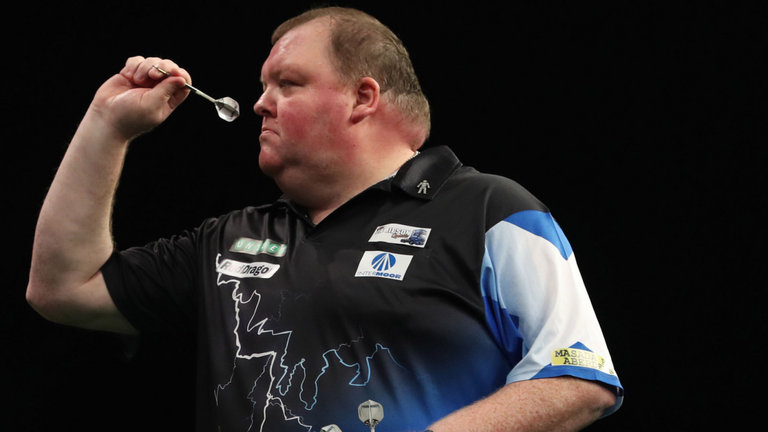 After what was a breath taking UK Open in Minehead last weekend, Premier League action resumes in earnest this Thursday night.

The BHGE in Aberdeen is the setting for the second visit to Scotland of 2019, with some mouth watering matches in prospect. Here I preview this weeks clashes

It’s a quick rematch in Aberdeen for Michael Smith and Rob Cross in Aberdeen as they play out a rematch of their UK Open semi final from last weekend.

Smith posted his first victory of the season in Exeter, with a 7-4 win over the out of sorts Raymond van Barneveld.

Cross was in rampant mood in the Westcountry, romping to a 7-1 win over a shell-shocked Daryl Gurney, who was 6-0 in arrears before registering on the scoreboard.

As previously mentioned, the duo met in the last four of the UK Open last Sunday, with Cross coming out on top. 11-7. Smith has been suffering the after effects of an abscess removal, and this caught up with him after some blistering performances in the earlier rounds.

Cross went all the way to the final, but he too ran out of gas, beaten 11-5 by Nathan Aspinall in a an inspired display by the Stockport thrower.

Prediction: This could be closer than Sunday’s encounter, and I lean towards a 6-6 draw.

Only one point separates Daryl Gurney and James Wade in the current table, but there is a difference of five places in a congested Premier League. The two could swap places by the end of play.

Gurney had a week to forget in Exeter. He was crushed by Rob Cross, who averaged 102.16 in a rout, with Gurney twelve points back.

Wade enjoyed a famous win over the man to beat, Michael van Gerwen in last weeks action. The Aldershot man punished several missed doubles from MVG, and then didn’t allow the Dutchman a shot at a double for the final four legs, where he raced away for a 7-3 win.

Gurney opened his campaign with a 10-1 win over Reece Robinson in Minehead, but was edged out 10-9 by Michael Smith in Round five.

Wade went one step further to the last 16 after wins against James Wilson and Max Hopp, but Ross Smith caused an upset with a 10-7 win.

Prediction: Wade’s doubling consistency can earn him a 7-5 win

It’s Austria v Wales in Scotland in match three, as two in form men meet in the battle for Premier League points.

Suljovic impressed last week in Exeter, with a dominant 7-4 win against Peter Wright, to pick up his first win of the campaign. “The Gentle” built a 6-1 lead, and although “Snakebite” fought back to 6-4, the Austrian saw out the win for a precious two points.

Price was involved in a thriller with contender, Luke Humphries in a high quality affair. The Welshman scored a 147 finish and missed double 12 for a magical nine darter, while Humphries took out a 161 checkout as the spoils were shared.

Suljovic again defeated Wright, but was then ousted 10-9 in the last 32 by Dimitri van den Berg.

Price continued his good recent form which has garnered two back to back Players Championship Titles, with a run to the semi finals in Minehead. Price left his comeback too late in an 11-9 defeat to eventual winner, Nathan Aspinall.

Prediction: Price is in red hot form, and I expect him to win this one 7-4

Two men desperately searching for somewhere approaching some form meet each other in the penultimate match of the evening. 2019 is fast turning into a nightmare for Raymond van Barneveld rather than a swansong year. Several early exits, coupled with a drop out of the world’s top 32 has left the Dutchman fighting to be involved in the remaining TV majors this year. While Wright’s plight isn’t as dramatic, he still is in dire need of a boost following a dip in form.

van Barneveld couldn’t take advantage of a less than 100% Michael Smith in Exeter, and he slipped to an uninspiring 7-4 defeat.

Wright also tasted defeat, slipping to a 6-1 deficit before making the scoreline respectable in an eventual 7-4 reverse.

Both men suffered exits at their first hurdles last weekend.

van Barneveld was hammered 10-3 by the unheralded “Mirror man” Simon Stevenson, while Wright was drawn against Suljovic, who repeated his previous nights victory in a 10-8 win.

Prediction: Wright should see this as a golden opportunity to regroup, and should get maximum points in a 7-4 win

A faltering green machine will aim to get back on track in Aberdeen, after an unexpected reversal in fortunes. The latest “contender” on the block is “The Highlander” John Henderson, who will aim to send his home crowd into a frenzy by toppling the main man. Henderson famously beat MVG in the 2017 World Grand Prix on the way to a TV best semi final.

van Gerwen was stunned in Exeter by a clinical opponent in James Wade.Wade made MVG pay for several early missed doubles, and after levelling, he ran away with a shock 7-3 win.

van Gerwen was shocked again in Minehead, this time by old sparring partner, Mervyn King. Weeks after their spat in a Players Championship event, where MVG accused King of “giving up”, the inspired Bradwell man scored an impressive 10-6 win to dump van Gerwen out at the first stage.

Henderson was unfortunate to draw Michael Smith first up, and was soundly beaten 10-5

Prediction: Henderson will need the crowd and his power scoring to lift him to victory, but an MVG 7-3 win is my pick