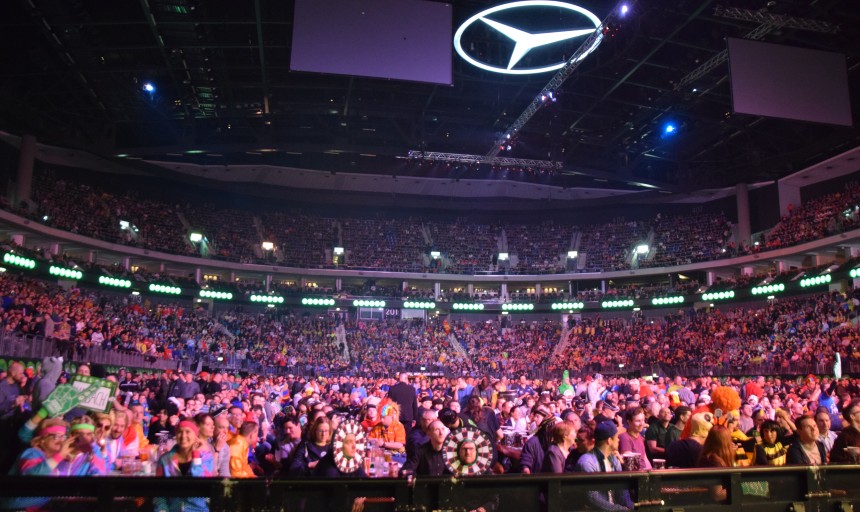 The Unibet Premier League goes international this week, as the show piece event rolls in to The Mercedes-Benz Arena in Berlin, Germany. It’s a huge venue, and one of the highlights of the PDC calendar.

The league is taking some shape, and there will be plenty of players looking to make positive moves up the table.

Here I preview this weeks offerings.

Opening the show in front of a massive crowd in Germany are two form horses in Gerwyn Price and Rob Cross. Only two points separate the two players, with Price looking to bounce back from a big loss in the East Midlands last week.

Price disappointed in what should have been a 50/50 match on paper in Nottingham last week, as Michael van Gerwen brushed the Welshman aside in a 7-2 win.

Cross continued his resurgence with a sound 7-3 win against the fast sinking Raymond van Barneveld.

With both men not required to qualify for Euro Tour due to their lofty rankings, it was on to the Pro Tour in Wigan.

Price enjoyed a solid semi-final run in Saturday’s event, before losing out 7-2 to Daryl Gurney. He was stunned by Andy Boulton on Sunday in a 6-5 reverse at the last 64 stage.

Cross went out in the quarter finals to the eventual winner, Dave Chisnall on Saturday. He skipped Sunday’s event due to illness, in preparation for a big week of action.

Prediction: Both are in fine form, and I can’t separate the two. I favour a 6-6 draw.

Third meets fourth in match two in the German Capital, as both James Wade and Peter Wright look to get back to winning ways.

Wade was bought back to Earth after recent fine performances, as Mensur Suljovic was ruthless on both scoring and finishing to post a 7-3 victory.

Wright was forced to settle for a point with Daryl Gurney in a match he should ought to have won. He is upwardly mobile in the table though over the past few weeks.

Saturday saw James Wade suffer a last 64 exit to Aaron Monk. It was the last 32 for the Aldershot man the very next day, where Vincent van der Voort sent him packing 6-4.

Wright was stunned 6-5 in the opening round on Saturday to Robert Marijanovic, and he only went one round further on Sunday, when the unheralded Jose de Sousa triumphed 6-4.

Prediction: This one is a tough one to predict, and could come down to just a single break of throw. I just edge Wade’s consistency to carry him through 7-5.

Only four points separate top spot from eighth place, and the men that occupy those two spots in Michael van Gerwen and Daryl Gurney, clash in what could be a crucial match in the quest for points.

MVG restored some relative PDC normality, as he shrugged off any thoughts of a close game between him and Gerwyn Price. The Dutchman easily secured a crushing 7-2 win.

Gurney arrested his recent startling slide after 7-1 and 7-0 defeats, with a battling 6-6 draw with Peter Wright.

Van Gerwen swerved Wigan all together in a rare weekend off.

Gurney got some much needed match sharpness in what was a solid weekend overall. He reached the final on Saturday, where Dave Chisnall edged him 8-6. He suffered a surprise 6-4 defeat to Robert Marijanovic in Sunday’s tournament.

Prediction: van Gerwen will want to steal the show in huge surroundings, and a big performance is surely imminent. Gurney wont be afraid of the Dutchman, having defeated him in winning the Players Championship Finals last November. I still favour a resounding 7-3 MVG win.

Only a point is the difference between the two players in the penultimate match of the night. Gentle giant, Mensur Suljovic is coming back into some form, and will be looking to continue his momentum when he faces Michael Smith, who enjoyed a big win over his “Contender” opponent last week.

Smith faced what looked a tricky test last week against contender, and UK Open Champion, Nathan Aspinall. In what was a low scoring game, Smith secured the points with a 7-2 win, and a near 94 average compared with Aspinall’s disappointing 88.

Suljovic enjoyed an impressive 7-3 win over form horse, James Wade in Nottingham. He averaged over 101, and had 50% success on his doubles in a welcome win.

Ryan Joyce knocked Smith out 6-3 in round one of Saturdays Players Championship event. Jan Dekker defeated the St Helens thrower by the same scoreline in Sunday’s play.

Mensur was absent in Wigan, and didn’t take part in the weekend’s action.

Prediction: A lot of this game will depend on Smith’s tolerance of Mensur’s methodical throw, as a rhythm and pace player. If he can negotiate this, I can see Smith running out a 7-4 winner, with power scoring winning the day.

It’s a massive match to round off the night, as Raymond van Barneveld, fighting for his very existence in the league, meets home hero, Max Hopp, who is the latest of the “contenders” to take to the stage. There have been three draws and three losses for the newcomers thus far, but Hopp will be a strong contender to buck the winless trend.

The doyenne of Dutch Darts, van Barneveld, was hardly in the argument in a tame 7-3 reverse at the hands of Rob Cross in Nottingham last week. He averaged just over 91, a full 10 points behind Cross, which proved pivotal.

Hopp lost out in the last 64 in both Players Championship events last weekend, where Jamie Lewis and Cristo Reyes took his scalp on Saturday and Sunday respectively. He was absent from the Euro Tour qualifiers, as he will play as a host nation qualifier.

van Barneveld finally enjoyed a renaissance in Wigan last weekend. He negotiated his way through three matched on Friday to qualify for the German Open, before exiting at the last 64 stage of Saturdays Players Championship event to Gerwyn Price. Sunday though saw Barney rolling back the years to reach a final. He survived eight match darts against Zoran Lerchbacher in the second round to eventually win 6-5, and then enjoyed good wins against Geert Nantjes, Martin Schindler, Jan Dekker and Keegan Brown. Adrian Lewis also turned back the clock to deny RVB the Title, romping to an 8-3 win.

Prediction: Hopp lifted the German Open last year, on the Euro Tour, but really felt the pressure in the European Championship later in the year. He was 9-5 up against James Wade in the semi-final, but missed three match darts, and lost 11-10 in a damaging defeat. This could play a part in Berlin, as he will have the weight of a nation on his shoulders. Barney finally came back into form over the weekend, and if that man turns up, he can enjoy a vital 7-5 win. A defeat is unthinkable for RVB, who will surely be the man to be relegated if he can’t pick up the two points in this one.